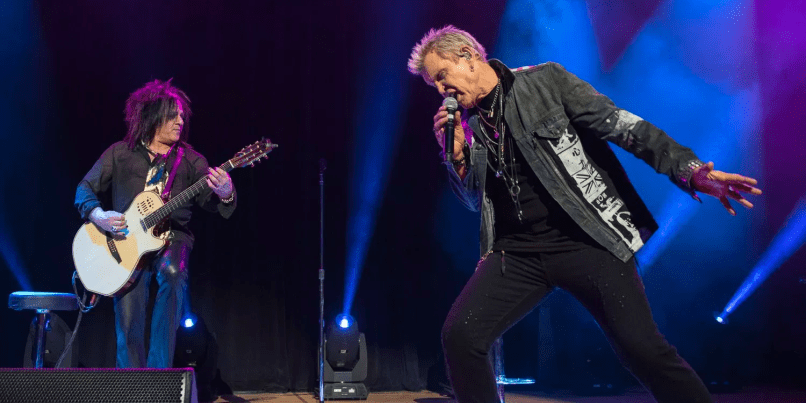 Setting the Stage: An intimate evening with the legendary Billy Idol and his longtime guitarist Steve Stevens on their “Turned On, Tuned In and Unplugged” tour is pretty cool, as it is. But seeing them Wednesday night (March 28th) at Town Hall, just steps away from New York’s Times Square, gave it an Idol on Broadway vibe — a sort-of punk-rock version of the mega-successful Springsteen on Broadway run that ended this past December. Like Bruce Springsteen did during his Broadway run, Idol and Stevens were there to deliver the hits and tell the stories behind them.

Taking the Stage: With no opening act, Idol and Stevens walked out onto the stage at 8:15 p.m. and immediately blessed the audience with an acoustic take on “Dancing With Myself”, the song Idol first recorded with his punk band Generation X and then turned into a massive solo hit. Idol then recalled being at a nightclub in New York City at the time of the song’s release, and remembered everyone getting up from the bar to dance to a certain song, which turned out to be his very own “Dancing With Myself”. He also shared memories of CBGBs and the New York rock scene in the ’80s.

Despite a gravelly speaking voice, Idol’s vocals are still quite strong, as evident on the next song, the ballad “Catch My Fall”. Idol then shared his love for legendary British acts like The Beatles, The Stones, and The Who, and reminisced about the ’70s UK punk scene, in which he was fully engrained, and offered up a taste of his Generation X days with “Kiss Me Deadly”.

Next up were “Sweet Sixteen” and a cover of The Kinks’ “I’m Not Like Everybody Else”, followed by a longwinded story about his relationship with his dad. Idol shared how his father didn’t really understand the rock-star life, but warmed up to his son’s career during his final years before his death. The veteran rocker then played “Ghost in My Guitar” from his most recent album, 2014’s Kings & Queens of the Underground, in honor of his late father.

Following “Eyes Without a Face”, Stevens would get his moment in the spotlight, sharing his story of being a New York City kid growing up in Rockaway, Queens, and attending the High School of Performing Arts in Manhattan. The guitarist then showed off his impressive skills with a blistering solo that lasted several minutes.

“Don’t Need a Gun” and “To Be a Lover” were next, followed by Idol recalling being at a party with Mick Jagger and Keith Richards and seeing them drinking Rebel Yell bourbon, thus gaining the inspiration for one of his signature songs. Naturally, he performed “Rebel Yell” next, allowing the fans to handle the fist-pumping “more, more more” lyric.

With “White Wedding” leading off the encore and following “Rebel Yell”, fans were treated two of the great hard-rock anthems of all time back-to-back. Idol and Stevens ended the night with a rousing rendition of the oft-covered Johnny Kidd & The Pirates song “Shakin’ All Over”.

Overall, the set made for a truly entertaining and downright informative evening. A lot of people have this image of Idol as this spiky bleach-haired MTV heartthrob in the ’80s, but hearing the stories behind the songs, and then having them played at their basic level, with an acoustic guitar, really showed how great Idol and Stevens are as songwriters.

Setlist:
Dancing With Myself
Catch My Fall
Twenty Flight Rock (Eddie Cochran cover)
Kiss Me Deadly (Generation X cover)
I’m Not Like Everybody Else (The Kinks cover)
Sweet Sixteen
Ghost in My Guitar
Eyes Without a Face
Steve Steven’s Acoustic Guitar Solo
Don’t Need a Gun
To Be a Lover
Rebel Yell

Encore:
White Wedding
Shakin’ All Over (Johnny Kidd and The Pirates cover)