Plus, the singer-songwriter answers "Burning Questions" 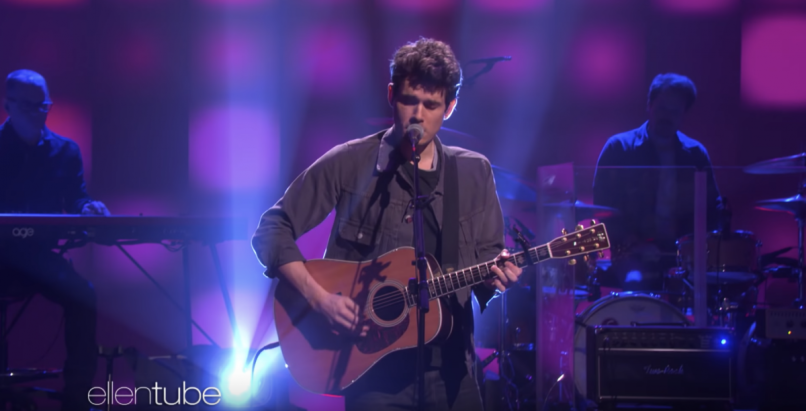 Last week, John Mayer released a new single called “I Guess I Just Feel Like”. Today, the famed singer-songwriter appeared on Ellen to play the thoughtful song live for the first time.

Introduced as “one of the biggest stars in music,” the singer was stationed on an acoustic guitar and backed by a full band throughout the performance. The rendition only slightly departed from the original single, which more prominently features electric guitar solos as opposed to the acoustic-focus of Mayer’s delivery here.

Check out the performance below.

In addition to the performance, the “Your Body Is a Wonderland” hitmaker sat down for an interview and played Ellen Degeneres’ favorite question-and-answer game, “Burning Questions”. During the interview, the pair’s conversation spanned his friendship with Andy Cohen; how he pulled off a fake Vanity Fair Oscars party in his living room for social media; and his weekly soothing comedy show, Current Mood. He also spoke on his two years of sobriety, noting, “I just finished. I completed my course in drinking.” He added, “Thankfully, for me — I was very lucky — it wasn’t all that deep. I just went, ‘You know, I think I’m done.'”

Later, the 2000s pop icon answered Degeneres’ “burning questions,” raising money for his charity, Heart and Armor Foundation, for each truthful answer. The segment’s topics spanned his first celebrity crush on Shelley Duvall, his bedtime while not on tour, beauty tips, and his favorite parts of the body. You can watch both interview segments below.

Mayer will spend the summer on tour with Dead & Company ahead of a solo trek in the fall. You can sang tickets to all his shows here.

While “I Guess I Just Feel Like” is a standalone track, you can expand your Mayer vinyl collection by heading to ReverbLP.