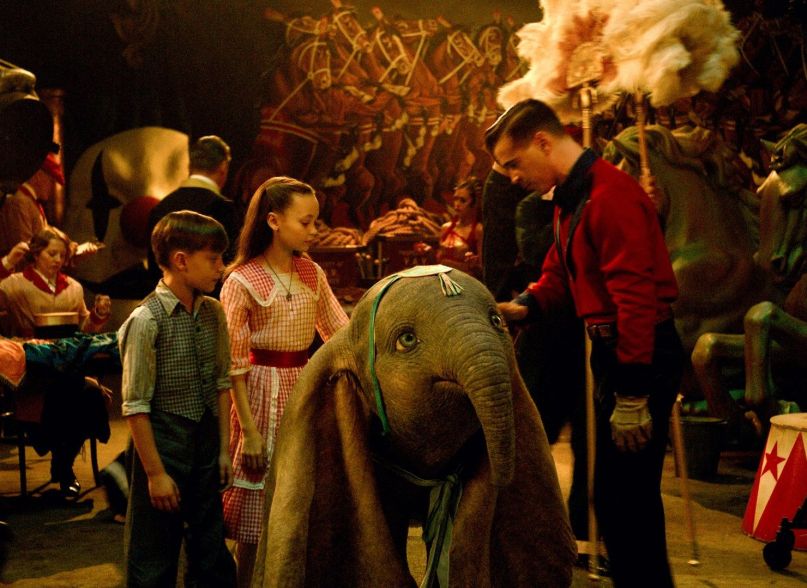 The Pitch: Disney’s 1941 animated classic Dumbo is the latest to get a live-action re-do, this time courtesy of Tim Burton, who helped kick off this whole remake trend in the first place with Alice in Wonderland. As Burton has noted, the original Dumbo is probably better remembered for its tone and imagery than for its actual narrative, mostly because it doesn’t really have one. (The idea of Dumbo using his ears to fly isn’t even introduced until the 54-minute mark of the 64-minute movie.)

So he and screenwriter Ehren Kruger have plenty of room to play around with their take on the story of a picked-upon pachyderm. Dumbo’s first act covers most of the plot beats from the original movie, albeit from the perspectives of human circus performers instead of talking animals. The rest of the film then expands into a pseudo-sequel about what happens once Dumbo achieves fame as a flying wonder.

The Actual Plot: Having lost an arm in the war and a wife to influenza while he was overseas, World War I vet Holt Farrier (Colin Farrell) returns to his circus life to find that things have likewise changed for the worse there. To keep the small circus afloat, cantankerous ringmaster Max Medici (Danny DeVito) has sold off the horse-riding act that made Holt and his wife stars. The still-grieving Holt struggles to reconnect with his kids Milly (Nico Parker) and Joe (Finley Hobbins) while working a far less glamorous job as an elephant caretaker.

But all that changes when the Farriers discover the aviation abilities of big-eared baby elephant Dumbo. That brings the Medici circus to the attention of showman entrepreneur V.A. Vandevere (Michael Keaton) and his glamorous French trapeze artist star Colette (Eva Green), who want to make Dumbo the star attraction in their expansive Dreamland amusement park — an Art Deco riff on Disney World. (This film desperately wants to be set in the 1930s, but is instead set in 1919.)

The Greatest Show On Earth: Having played with circus imagery in many of his previous films, this is Burton’s first real chance to go full Big Top. While the animals in Dumbo are CGI — including the adorably rendered eponymous elephant himself — most of the sets are practical, which helps lend the film a sense of tangibility that many of Burton’s recent projects have lacked. Yet other than a surprisingly beautiful (and far less disturbing) riff on the infamous “Pink Elephants on Parade” sequence from the original, Burton does less than you might expect with the circus premise at his disposal. There’s some beautiful cinematography in Dumbo, but not any particularly creative circus performances; The Greatest Showman, for instance, managed far more creativity in its aerial acrobatics than Burton does with his. Instead, Burton leans hard into the idea of the circus as a found family of misfits, with Dumbo as the ultimate emblematic example.

The soft-spoken (and aggressively Southern-accented) decency of Farrell’s Holt sets the tone for Dumbo. This is a movie about fundamentally good people just doing their best in a complicated world, whether that’s in parenting or circus financial planning. That occasionally makes Dumbo a bit cloying — particularly with its lackluster kid characters — but it also inspires wonderfully warm, charmingly low-key performances from Farrell, DeVito, Green, and the whole Medici circus troupe. (Keaton plays more of a costume than a character, although Burton at least knows to let his erstwhile Batman and Penguin share some screen time.)

Changing With The Times: Making a heartwarming movie about circus animals is a much different prospect today than it was in 1941. Elephants, in particular, have been at the center of a hugely successful animal rights campaign to end the practice of using animals in circuses. Dumbo is well aware of that cultural shift, and isn’t afraid to raise questions about the ethics of animal performers. Like Jon Favreau’s live-action remake of The Jungle Book (a stronger film than this one), Dumbo manages the impressive balancing act of maintaining the tone and spirit of the original animated film while thoughtfully updating its message. Less successful is a patronizing attempt at encouraging young women’s interest in STEM, which mostly boils down to Milly constantly saying the word “science” while never actually doing any of it on-screen.

The Verdict: This is Burton’s most open-hearted film since Big Fish, and that fundamental sweetness allows Dumbo to occasionally coalesce into something greater than the sum of its parts. Its characters are thinly written, its antagonist is one-note, and its clumsy third-act action climax is wholly perfunctory. Yet despite all that, Dumbo still manages to offer the sweeping old-fashioned magic of an earnest family blockbuster. It’s not a game-changer for either the live-action Disney remake canon or for Burton’s later filmography, but it’s an agreeable addition to both (and a huge step up from Disney’s truly dire Beauty and the Beast remake). Though Dumbo sometimes feels like the outline for a better, more nuanced take on the same material, its charms stretch as high as an elephant’s eye.

Where’s It Playing? Dumbo flies into theaters everywhere on March 29th. Get your tickets now!