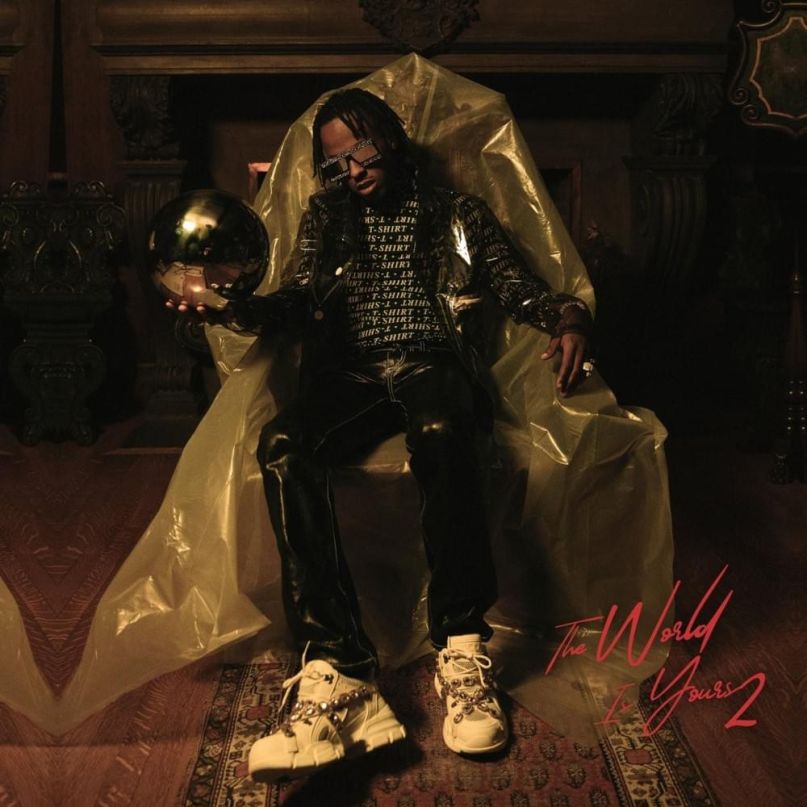 The Lowdown: Rich the Kid, the self-proclaimed “best rapper in the world,” had a lot to prove. Although his debut album, The World Is Yours, peaked at No. 2 on the Billboard 200 and helped him make a name for himself, it also set a competitive standard. And considering this first full-length record boasted two multi-platinum singles, “New Freezer” feat. Kendrick Lamar and “Plug Walk”, it’s no surprise that Rich became known for his unwavering confidence. Now, the New York artist has been tasked with beating the infamous sophomore slump. With his newest release, understandably titled The World Is Yours 2, Rich capitalizes on his connections to create an all-star cast of features to help celebrate his come up.

The Good: If Rich was confident on The World Is Yours, then he’s a drunk with cockiness on The World Is Yours 2. It works for here, though — and maybe he has the right to be — because there is truly something redeeming in each of the 16 tracks. In a single-driven industry where a well-thought-out, well-organized (top to bottom) record is hard to come by, Rich the Kid has actually succeeded in putting one out.

The success of his tracks lies in their strong foundations: The songs are grounded in playful and amusing beats that Rich’s flow functions perfectly in conjunction with. For proof, look to “Fall Threw” with Gunna and Young Thug, where Rich demonstrates that Lizzo isn’t the only one bringing the flute back. The track’s beat is buoyant and works overtime to carry the features along a steady path, creating an overall cohesiveness. And while Rich rightfully prides himself on the individuality of his beat selection, he’s also ordered the record in a way that highlights the diversity without sacrificing the album’s harmony.

The Bad: To expect a Rich the Kid album to have no features would be insensible. Even his first mixtape — years before he was signed — included features from RiFF RaFF, Jeremih, Young Thug, Migos, and more. So, it’s not remotely shocking that The World Is Yours 2 has 10+ guest appearances in its ranks. This sets up a delicate paradigm for Rich, whose energy is highly susceptible to influence from those also on his tracks. In some cases, this proves to be highly successful, but in others, it flops.

Look at “Whoa”, for example. Positioned directly in the middle of the record, the song features R&B legends Miguel and Ty Dolla $ign, and it’s undeniably one of the strongest songs on the project. Rich’s verses wedge comfortably between Miguel’s sensual and charming hook, which highlights Rich’s talent and elevates the entire track. But look just two songs earlier at “Two Cups” with Offset and Big Sean for the negative side of this paradigm. At just over three minutes, the song’s first half with Offset is mind numbingly boring. It’s just another addition to the already oversaturated Offset market and forces Rich to the back. Luckily, the track is later saved by Big Sean, which extenuates the damage.

The Verdict: Although the surplus of features is at times overwhelming, The World Is Yours 2, is an extremely strong sophomore album. Throughout the listening process, there’s never a dull moment. Whether it be the frisky and alluring beats or the never-ending rotation of guest appearances, there’s always something new to focus on. However, the truth is, for someone who’s known for his confidence, you would think that Rich would trust in his own ability to carry the album a little more. Especially considering the songs without features (ex. “Racks Today”, “Splashin”) are some of strongest on the record, it would be nice to see his next project feature himself more prominently.

Buy: Check out vinyl from Rich the Kid here.