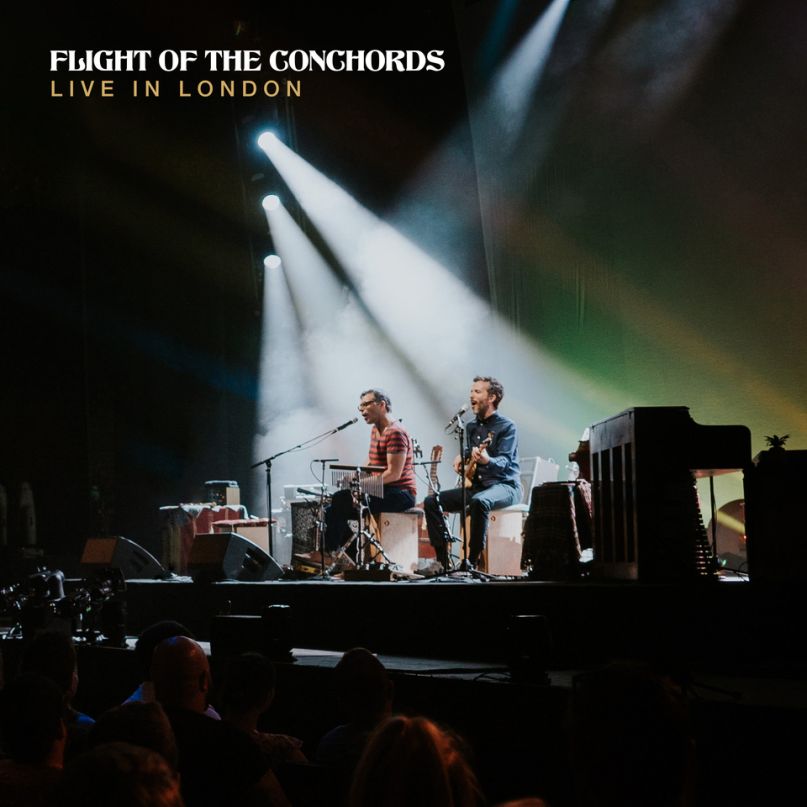 The Lowdown: Flight of the Conchords have never risked overstaying their welcome. Instead, Bret McKenzie and Jemaine Clement have opted to have their fictionalized selves deported as illegal immigrants rather than commit to a third season of their acclaimed HBO comedy series and have limited their actual selves to touring and recording only when it suits them. During that downtime, Clement has gone on to become a steady Hollywood presence on both sides of the camera, and McKenzie has struck Oscar gold by writing silly (and touching) songs for Kermit the Frog and the Muppets. As a result, the pair have been able to treat Flight of the Conchords as an enjoyable layover en route to their next respective projects, and fans have never been able to quite get enough of New Zealand’s fourth-best folk-parody duo.

Consequently, Live in London, an album compiled from an October 2018 show at London’s Eventim Apollo, does some extremely heavy lifting besides getting the band back together again. It returns the group to their HBO special roots, introduces a standout reboot (“Iain and Deanna”), provides an official home for several other songs many Conchords fans still may not have heard (“Father and Son”, “Summer of 1353”), and allows the band to perform their classics with the backing of the “one and only” New Zealand Symphony Orchestra, a.k.a. Nigel. Yes, it’s a one-person national orchestra. And if that Kiwi-deprecating joke soars over your head — or to either side of it — you’ve likely booked the wrong flight.

The Good: The coupe of Live in London is that the uncanny chemistry between McKenzie and Clement (as demonstrated in both their television series and past live performances) comes across as strong as ever. Equally adept at comically (but skillfully) stepping into pastiches across several genres; delivering songs peppered with punchlines, clever premises, and ironic twists of fate; and trading stage banter consisting of dry exchanges of mumbles and naïve revelations, the duo use their self-deprecating wit and bumpkin charm to poke holes in their rock star-lite personas and create 90 minutes of comedy that wants for very little.

And it’s that fullness of experience that makes the record so rewarding — like an episode of SNL that hits on all cylinders. In “Iain and Deanna”, the pair role-play a lewd office romance that earns every vulgarity by ingeniously rhyming “spreadsheets” with “bed sheets.” Later, listen to Bret and “Mad Dog” recount a story of rock and roll excess about a complimentary hotel muffin that, at least in their minds, would give Keith Moon and Oliver Reed a run for their pub tabs. And, if you’re still on board, why not pick up a recorder (especially if you’re British) and travel back to 1353 as Jemaine attires himself in “the very tightest tights and pointiest of boots” in his medieval attempts to “a-woo-oo-oo a lady.” The Conchords travel from the Middle Ages (“The Summer of 1353”) to the robotic uprising of 2000 A.D. (“Robots”) — with breakups (“Father and Son”), hookups (“The Most Beautiful Girl (In the Room)”), and rap beefs (“Mutha’uckas”) in between – and miraculously never seem out of their element.

The Bad: Even McKenzie and Clement joke that the western-flavored tale of bad hombre “Stana” overstays its welcome by several minutes, and while some of these recordings will technically count, for now anyway, as the official releases of these songs, fans might be tempted to opt for their own favorite versions readily available on YouTube. But other than a couple bits out of 22 tracks lacking zing, the greatest criticism comes with the live album format itself. While having these songs available to listen to will make any commute more enjoyable, fans might prefer waiting on the inevitable (?) DVD release of the special. The songs and banter translate well to a listening experience, but a larger part of the band’s humor than credited relies on visuals. Whether it be the physical interplay between the duo, the gag of watching Nigel enter alone, a jam session with the entire band rocking out on recorders, or just audience laughter that seems to stir without purpose, listening to this record can at times feel like being on the outside of an inside joke.

The Verdict: “It’s great to be here in London. It’s a little bit of a reunion gig for us,” explains McKenzie early on in the show. “We haven’t played since last night.” Before the laughs can die out, Clement offers the disclaimer, “We don’t know if you’ve heard these jokes. You might be exactly the same people.” And while it’s yet another bit (funny, in part, because it’s likely true), it also points to how hard-won a tight 97 minutes of musical comedy must be. Before the encore, the pair even play a song (“Back on the Road”) that strings together the details from all of the evening’s rock and roll tales of excess and debauchery. Again, it only goes to make listeners appreciate just how well thought out the band’s songs, gags, banter, and presentation all are. Live in London delivers more than an hour and a half of seamless music and comedy that doesn’t require skipping around. It’s a remarkable feat, even for an act as beloved and established as New Zealand’s fourth-best folk-parody duo. Oh, and Nigel.

Buy: Pick up Live in London and Flight of the Conchords vinyl here.