Avey Tare’s Cows on Hourglass Pond Ranks Among His Best 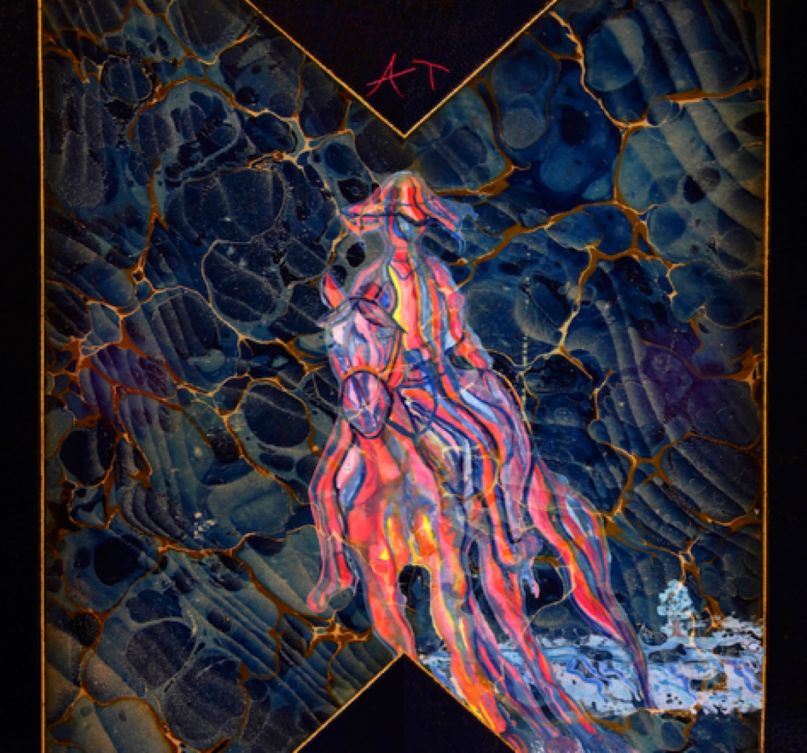 The Lowdown: If you dig into the records of Animal Collective co-frontman Dave Portner, you’ll soon hit water. It’s the main form of matter on his band’s 2009 classic Merriweather Post Pavilion, as well as Tangerine Reef, 2018’s inscrutable sans-Panda AnCo outing produced in support of coral reef conservation, but it also laps around the edges of his work as Avey Tare. That remains true on Cows on Hourglass Pond, Tare’s latest record that feels, from the jump, like a natural culmination of the work begun on his previous two solo outings of this decade. If 2010’s Down There sunk listeners into the swampland of Portner’s mind, and 2017’s Eucalyptus marooned them with listless desert-island hallucinations, then Cows on Hourglass Pond brings them back ashore, changed by the journey and armed with a handbook for living right in the face of dark days.

The Good: The search for intimacy and connection powers the best work of Portner’s catalog (the longing “Grass,” the anxious “Peacebone,” the lovestruck “Bluish,” among others), and on Cows on Hourglass Pond, it returns to the fore after a half-decade of sonic wandering. The record finds Portner fruitfully preoccupied with the contours of aging; whether he’s accentuating the positive (the bubbling “What’s the Goodside?”) or probing humanity’s fixation on the unattainable (“Taken Boy”), Portner’s lyrics radiate a relatable combination of wary optimism and well-earned bittersweetness without ever tipping over into the realm of sanded-off platitudes. There’s room for nostalgia, too; over a gently hook-y beat, album standout “Saturdays (Again)” as a mellower companion piece to the Strawberry Jam favorite “Fireworks”, one concerned more with the simple pleasures of the people on the ground rather than the bombast in the skies above.

Speaking of which: the biggest story on the record may be Portner’s renewed focus on rhythm. Avey Tare’s music hits the hardest when it’s grounded by a dominant beat, and you’ll find plenty of those on Cows on Hourglass Pond, from the low-key pound of “Eyes on Eyes” to the coconut-clop trot of “K.C. Yours”. It’s also the subtle driver behind the winning “HORS_”, whose gentle cadence captures a cracked and glitchy version of the pastoral Asheville setting in which the record was recorded. The track hearkens back to simpler times on multiple scales, from our own nostalgia for schoolyard basketball games to humanity’s unconscious longing for the days before carriages went horseless. It’s the type of song an AI might write after listening to RAM for 10,000 hours, and weirdly, that’s meant as a compliment.

The Bad: Thanks to the record’s relatively high hit ratio, the few minor misses stand out more than usual, whether from lapses in songcraft or a faltering pen. The wordless digital thunderstorm of “Chilly Blue” is evocative but slight, and the humid sonic amber of “Nostalgia in Lemonade” traps some of the record’s most affecting lyrics in a slo-mo haze that even electro-shock synths borrowed straight from Centipede Hz can’t break. Elsewhere, the words aren’t victims, but perpetrators; beneath the catchy bounce of “K.C. Yours” is a gonzo tale of robots that feels out of step with the record’s more grounded material, and the collage-style “Our Little Chapter” never quite lives up to the tantalizing melancholy of its title.

The Verdict: Ten years into the comedown from Animal Collective’s brush with critical and commercial success, Cows on Hourglass Pond offers Avey Tare a low-stakes stage for processing the high-stakes thoughts and emotions of approaching middle age. He makes the most of the opportunity, bookending the turbulent waters of his second decade in the public consciousness with a human-sized treatise on the priorities of adulthood as outward-looking as Down There was introspective. The resulting music ranks among Avey Tare’s strongest work of the ’10s, whether alone or with Animal Collective, and should be required listening for any old Millennial scared of turning 40 but even more scared of the alternative.