Song of the Week: Billie Eilish Asks the Big Questions on “Bury a Friend” 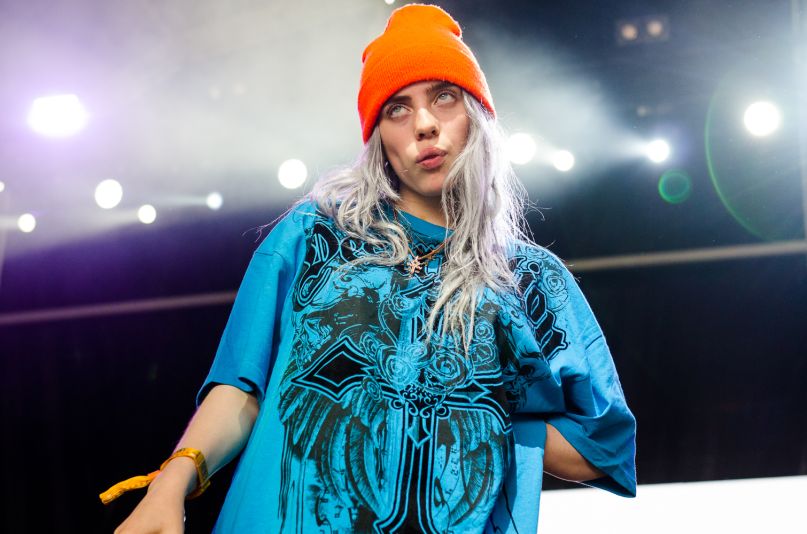 Billie Eilish strikes the perfect combination of spooky and caring in “Bury a Friend”, her third single from her upcoming debut studio album, When We All Fall Asleep, Where Do We Go? With only a debut EP (Don’t Smile at Me) and several singles out so far, 17-year-old Eilish has already attracted a massive following, likely due to her uniquely dark approach to electropop and the disaffected, yet thoughtful and emotional demeanor into which many of her songs lean.

If this is true, “Bury a Friend” leans harder in than ever before. The melody of its refrain feels almost familiar upon first listen: innocuous as a childhood rhyme, with understated vocals and unmistakably dark undertones. But the aspect of the song as a whole, ultimately, is anything but. “Bury a Friend” is completely ghostly, from the surface-level lyrics and subject matter (“Honestly, I thought that I would be dead by now”) straight down to the stripped-away beat that makes up the spine of the song. But Eilish’s truly masterful feat here — as in much of her music, but perhaps here most acutely — is her wedding of the superficially repellent and the innately appealing, the scary and the loved.

She assumes the position of a monster there to haunt somebody (a lover or herself, or all of the above), and fully digs her heels into the role, begging the questions of “Why aren’t you scared of me?” and “Why do you care for me?” in the same breath. Don’t be fooled by the quiet, alt-electronica music or by Eilish’s own soft voice, barely breathing these eerie lyrics: She’s quiet, but she’s only waiting just around the next corner, ready to find us.

Straight from his recently released EP, “JA RULE” has Benjamin Earl Turner boldly proclaim his aspirations (“Tryna make that ‘I don’t give a f*** money'”). Snappy hooks and confident lyricism show Turner in the driver seat, where he has the tools to reach the lofty heights he’s built for himself. –Brad Dountz

The second collaboration from the Brooklyn rapper and Aussie rocker produces yet another chic dance tune. By seemessly merging old-school vibes and jams with modern-day production, this unlikely duo leaves any eager listener lightheaded and weary, just like the title suggests. –Brad Dountz

Soccer Mommy – “Be Seeing You”

“Be Seeing You” brims with nostalgic but no less romantic love, perfectly capturing the feeling of missing someone (“Felt like a lack of rain/ But I could be drowning if you’d say my name”), filtered through Soccer Mommy’s catchy and energized approach to lo-fi indie rock. –Laura Dzubay

You can taste hints of LCD Soundsystem and Beck in “Shame”, but this Los Angeles-based rock duo have a sound that is still wholly original. The hip-hop-inspired beats and nonchalant vocal delivery add up to a track that is delightfully addictive. –Parker Reed

The digital beats and processed vocals of “Alien Angel” sound like they could fit in many a synthwave revival, but The Faint have been doing it longer, and frankly better, than many others in the same genre. What The Faint have that others don’t is that while the revival aspect is present, it is still absolutely 2019 in their world. –Parker Reed

Cage the Elephant is back, and “Ready to Let Go” makes it clear that the rock mainstay has lost none of their edge, expertly balancing gravity, dread (“One day, all our secrets will be spoken”), and the chaotic embrace of change against the scratchy guitars and unruly vocals that, even years later, remain indispensable to their signature sound. –Laura Dzubay

For as consistent of a songwriter as he is, it’s fitting that Josh Ritter drops an appropriately solid track as the first offering from his upcoming tenth album, which features Jason Isbell as producer. “Old Black Magic” leans heavier towards Ritter’s rock sensibilities and still possesses the signature qualities that have kept him trucking for two decades. No matter what direction, Ritter has yet to disappoint. –Parker Reed

This Edith Piaf cover comes ahead of Valentine’s Day, and Lucy Dacus’ adventurous, technology-fueled, reverent yet inventive approach to the traditional song proves that she and “La Vie En Rose” were made for each other. –Laura Dzubay

A fast-paced tempo adds so much more to this cover of the Bob Mould song from the Philly punk rockers. Vocalist James Alex wails ferociously, but never loses the underlying harmony of the song. The title of the song is a clever bite for everyone involved, and it shows a little tongue-in-cheek banter can go a long way in the self-serious world of rock. –Brad Dountz