Smoke Season share the Origins of new single “Up on Me”: Stream

A track the band calls "a love letter to Echo Park" 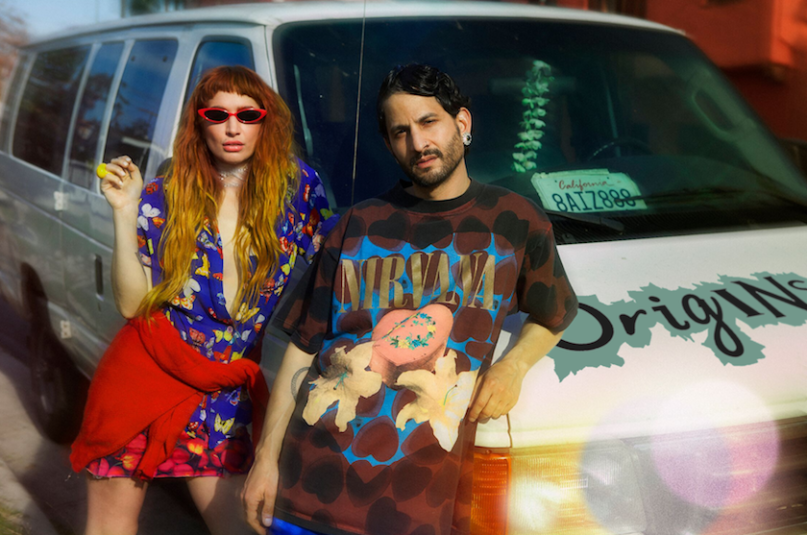 Origins is a recurring new music feature in which we give artists a chance to explain the influences behind their newest track.

Los Angeles has a fascinating dichotomy. On the one hand, there’s the glitz and veneer of the Hollywood lifestyle, where the famous schmooze with the uber-rich in their hilltop mansions. Then there’s the laid-back yet bold life of the artist, glamorous in its complete lack of glamor thanks to the strong sense of free-spirited community. East LA duo Smoke Season share an ode to their home in that latter half of the City of Angels with their new single and video “Up on Me”.

The track bops along a breeze of electro-soul thanks to frontwoman Gabby Bianco’s snappy synth work and cooing vocal melodies. “Sneaking all my kisses till we don’t/ Need them like we need the air that we breath,” she sings, as much to herself to her fellow Echo Park residents. “Riding down fixtures till we don’t/ No looking back, no looking back.” It’s all supported by Jason Rosen’s tropical guitar grooves, giving the track that sense of dirty beauty that defines their city so well.

“Up on Me” comes via its video from director Natalie Neal. The clip perfectly captures the Los Angeles Smoke Season resides in, a place where limits of past notions of self are lost in the harmony of androgyny, camaraderie, and art. Check out the video below.

For more on how their hometown and particular lifestyle influenced “Up on Me”, Smoke Season have shared the Origins of the track.

“Up On Me” is, first and foremost, a love letter to Echo Park. We’ve lived in the neighborhood for the last decade and it’s become the inspiration and backdrop to almost all of our music. We felt like it was time to pay homage to our turf and our community. East Los Angeles is dripping in vibrancy. You can see it in the food, the colors, the fashion and even in the billboards (nearly every single one on Sunset Blvd from Hollywood Blvd to Dodger Stadium is advertising some band’s new release). When making these lyrics, we sort of took the approach of trying to write a love song for our neighborhood itself — and speak to Echo Park as if it were our lover. We kind of saturated the music video with our friends from the community too. Everyone who worked on the video was like a little family. Oh yeah, and we featured Tacos Delta in the video and ANYONE who knows anything about nearby Silverlake knows that Tacos Delta is a legendary spot.

The community we live in is bursting at the seams with artists, and as a result, there is really a quiet kind of struggle to the scene because, let’s face it, very few artists are millionaires. This is what inspired our chorus lyrics: “Don’t give up on me.” We pictured all of us East LA musicians kind of saying it to each other. It’s kind of like saying: Yeah, my mom is disappointed in my unsafe career choice too but at least we got each other’s backs. No one is really rolling in luxury but we’re all pretty damn rich in art. We made sure to incorporate a lot of vintage styles in the video to express this theme and the only vehicle we feature was a beat up old Toyota whose passenger door didn’t even open (something you’d most definitely see a starving artist driving).

We live and breathe So Cal fashion and no one embodies that more than No Doubt. We love their androgyny, bright colors, and fusion of influences and styles. We really wanted to place No Doubt at the epicenter of the vision for “Up on Me” music video. And we really wanted the sounds and synths in the track to wreak that neon vibrancy that is Southern California ’90s fashion. We are so grateful that Natalie Neal signed on to direct the video because we’ve been constantly inspired by her insanely sharp fashion sense and second-to-none visual direction over the past couple of years. Her and Kristin Condia (our stylist) really captured this new age/No Doubt inspired LA streetwear vision that we were going for. In fact, the knocked it straight out of the park.

The East LA scene is made up of misfit angels and tastemakers. Your stereotypes about gender, sexuality, fashion and culture will be flipped on their head within a month here. One film sticks out in our minds as most effectively dismantling binarisms and marrying vibrant fashion choices to counterculture, and that’s Baz Luhermann’s Romeo + Juliet. We placed that theme at the heart of our vision for the video. We opted for mostly female skateboarders over male when making the video — showing that women can not only destroy a half-pipe, but also, gently braid their sister’s hair. We highlighted men who comfortably rock makeup and women’s fashion pieces to show that limiting notions of masculinity are completely irrelevant to sex appeal. Ultimately, we wanted to depict east Los Angeles as a place where vibrant culture and breaking stereotypes are inextricably linked — which Romeo + Juliet does perfectly.

Skateboarding and the streets of LA are a very old and happily married couple. When we met with Natalie for the first time to brainstorm about the music video, it was at the top of everyone’s mind that we needed to highlight LA’s skate culture in our love letter to the city. There’s such a uninhibited IDGAF attitude to skate culture which is so badass and inspiring. When we were shooting the video, we got hassled by the cops for shooting in a certain location. The skaters immediately fired back at the cops with no fear. Later they told us to chill because “that happens every time they go skate.” Our whole band even learned how to skate for the music video (with a ton of help from the amazing skaters that were featured in it). We were also really lucky to get to feature some amazing boards and artwork from Welcome Skateboards as well.