"We have a strong, dedicated following of leather-clad metalheads" 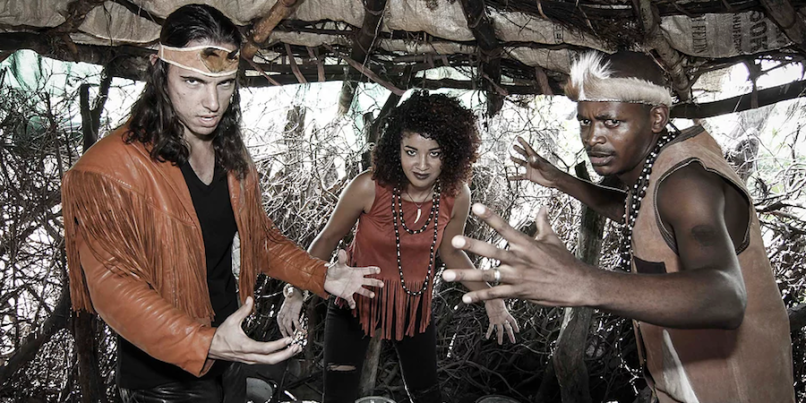 The allure of heavy metal reaches far and wide — nowadays, when major bands launch what is billed as a “world tour,” it truly is. However, one of the last continents to fall under metal’s spell is Africa — but that appears to be changing, with the emergence of acts like Skinflint.

Hailing from Gaborone, Botswana, the band — which is comprised of guitarist/vocalist Giuseppe Sbrana, bassist Kebonye Nkoloso, and drummer Alessandra Sbrana — has released a self-titled debut album, and recently embarked on their first-ever US tour, supporting Soulfly.

With the band in the States, all three members of the band took time out to speak with us about the challenges of being one of the few metal group in Africa, what they hope to accomplish, and incorporating elements of their culture into their hard-hitting sound.

ON BEING A METAL BAND HAILING FROM BOTSWANA

Giuseppe: I think it’s quite challenging, because in Botswana, we do not have metal outlets — stores that sell our CDs. And most of the venues and promoters do not want to work with heavy metal bands. So, it’s very difficult to tour there as a heavy metal artist. But the good news is we have a lot of fans there. We have a strong, dedicated following of leather-clad metalheads. They support us. Even though we have to set everything up ourselves, it’s worth it.

ON THE METAL SCENE IN BOTSWANA

Alessandra: There is a metal scene that has grown quite a bit over the past 10 years. It’s still part of an underground scene, but there are bands coming out that are quite good, so we have hope.

Kebonye: There are bands like Overthrust that are doing extreme death metal.

Giuseppe: And there is another good band called Wrust. Because despite the scene not being too big, these bands have been getting a lot of momentum — the BBC and CNN have done documentaries on us. And the way the fans dress is very distinctive. They have this cowboy look mixed with a lot of African themes, like they wear cow horns the way we wear mathoa [a traditional ankle shaker] on our ankles, as a special traditional instrument. Sort of like how Sepultura mixed elements from Brazilian culture with the metal scene – we are doing the same in Botswana, where we mix elements of African culture with heavy metal.

ON THEIR NATIVE MUSICAL INFLUENCES

Alessandra: We like to take influences from our environment. We live in a farm in the middle of nowhere, and there is a lot of natural landscape, and a lot of time to imagine and contemplate the mystical. We’re inspired by a lot of African rhythms and stories from East and North Africa, as well as Southern Africa, as well.

Giuseppe: Something about Africa that is very common is the storytelling. A lot of these stories that we talk about in the band’s lyrics have not been covered by mainstream media. You have all of these mythologies based on Africa, and we want to bring these tales to the forefront, to show people about these stories that they have never heard about before.

ON THE BAND’S NAME

Alessandra: The name doesn’t really have a meaning.

Giuseppe: We were just fooling around and we said, “This sounds good.” There was no intention or meaning behind the name. It sounded right at the time, and we went with it.

ON THE GROUP’S SELF-TITLED ALBUM

Alessandra: We’re very proud about this album, because it captures our style, in a way that we have been trying to achieve. It’s more gritty, it’s more raw, and it’s also very different.

Giuseppe: What we do when we record music, we don’t want to use any studio tricks or cut and paste or a lot of technology in our music. We want to capture the raw energy of a band live in the studio. We want the audience to when they listen to the album to feel like they’re in the same room as the band. It must feel honest. And we also called this Skinflint because I think it captures our style of African heavy metal. It represents best our philosophy in music.

ON THE SONG “BIRDS AND MILK, BLOODY MILK”

Giuseppe: It’s about a story of a singing bird that goes into this guy’s mind and starts telling him he must kill a male cow, and in return, the bird will give him a hundred more cows. And obviously, the man is mad. So, he believes this bird, kills the male bird, and the family starves. And we wanted to incorporate in kwasa kwasa, which is a famous style of dance music that comes from Africa. We wanted to take that rhythm and mix it with heavy metal.

ON THE BAND’S FUTURE PLANS

Giuseppe: Right now, we are going to do a tour with Soulfly. This is the first time we are in the States. But we want to tour the world — that is our official plan.

ON OFFERING ADVICE TO OTHER METAL BANDS IN FAR-AWAY LOCATIONS

Kebonye: You should keep on working hard, because you never know what can occur after ten years. We have been together for more than ten years. We started touring Europe about eight years later, and now, we are in the States.

Our thanks to Skinflint for taking the time to speak with us. Pick up the band’s self-titled album at the band’s webstore or at iTunes.