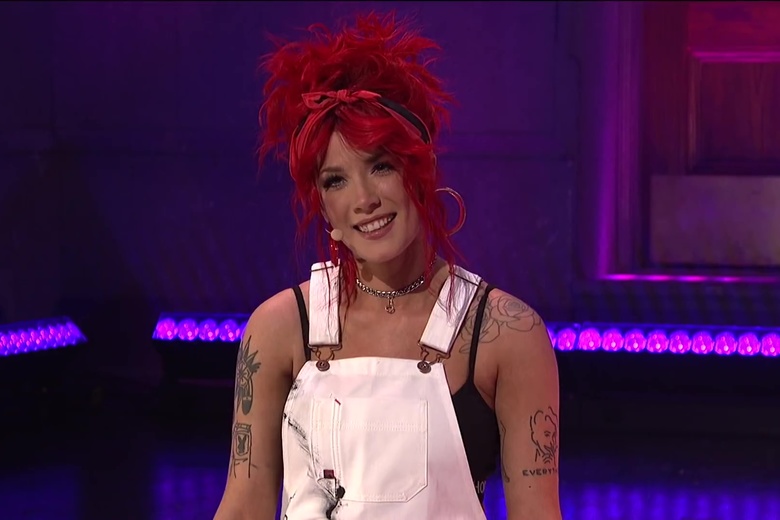 Last night, Halsey became the 26th host of Saturday Night Live to pull double duty as both sketch guest star and musical act. Unlike Donald Glover closing out last year’s season by doing the same thing, however, she was a less immediately apparent choice on paper. After all, while “Without Me” gave the fast-rising artist her first solo #1 on the Billboard Hot 100 late last year, she hasn’t released any other new material aside from that song since 2017’s acclaimed Hopeless Fountain Kingdom, and there’s no official word yet on when her third LP will be released.

But even with only “Without Me” out there to promote, the 24-year-old Jersey native wound up leaving a substantial impression throughout the whole episode, between her engaged presence in a solid majority of the night’s sketches and her noteworthy performance of “Without Me”, which we’ll get back to in just a second. Her monologue felt particularly abrupt, a single riff on her extremely Jersey given name (Ashley Nicolette Frangipane) quickly ushering in the rest of the show. But then, this was an oddly paced, fairly uneven outing for SNL across most of the night, so she still wound up the MVP of the evening.

Modern-day SNL seems to struggle in an especially noticeable way whenever there are several equally big news stories to address in one week, so needless to say, there was some trouble with a week that brought us President Trump’s third State of the Union address, the National Enquirer scandal involving Amazon overlord Jeff Bezos and his now-very-public penis, and the rash of elected Democrats exposed for teenage blackface scandals. All of the above, on their own, are rife for sendups. But where this week’s episode fell largely flat was in its assumption that recognition of the crazy news going on can substitute for jokes built around that news. (Really, this has been a problem since, oh, late 2016.)

The Meet the Press cold open was a perfect example of this approach, the entire roundtable struggling with their overwhelming desire to see a billionaire’s dong while also wishing this wasn’t the news. As has too often been the case in recent years, SNL wasted a good bit of time this week encouraging its generally left-leaning audience to guffaw in self-satisfied agreement than because the sketch is actually landing. (At least Kate McKinnon’s deeply unsettling Wilbur Ross continues to be a weekly highlight.) Even Aidy Bryant doing Matt Whitaker in a bald cap never gets beyond “hey, he was on the news too!” This was also evident with the continuation of Dem Trumps, a bit of satire still in search of a point, and “The Women of Congress”, a fairly brutal pre-taped bit paying one-note homage to various Congresswomen in the news. Even Weekend Update was largely a retread of several of the night’s already-worn talking points, aside from the always-welcome return of Alex Moffat’s Guy Who Just Bought a Boat. (“I feel sick and mad all the time.”) Satire usually works best when you take the bit a step further, and SNL too infrequently gets there with its political commentary.

Of this week’s attempts, the best by far came from the simplest setup, finding Kenan Thompson as a Virginia party rep polling a room full of elected officials about their histories of casual racism. As a good chunk of the cast gets to spout off one-liners about shoe polish and Halsey gets in a solid punchline about her bi-racial status, it might be one of those sketches where everybody’s yelling lines in the round for 3-4 minutes, but it wound up being one of the funnier all night.

The Joys of Anarchy

Some of the night’s best material came from leaning into the weirdness that the current, extremely Millennial SNL cast seems to be well at home with delivering. Manic escalation is one of the show’s strong points these days, and “Parents Call” was a delightful blast of it, Mikey Day flop-sweating through a series of dragged-out calls home during a work meeting that keep ending in terrifying revelations about his parents’ injuries. Beck Bennett and Halsey clearly have a ball with it, the latter getting a few big laughs out of her mummified hands alone, and it brought a propulsive energy to the episode that too little of it found otherwise.

Likewise, the final sketch of the evening saw Pete Davidson ruining a shoot of the Riverdale finale by playing an overly Method cadaver. (“Lionel Rodgers, I play corpses.”) While the whole episode felt a bit “off” in timing terms, with a number of commercial breaks filling the final 20 minutes, Davidson gets a few major laughs out of the simple joys of a would-be corpse flailing around and screaming. It’s okay for SNL to still be goofy, and not just A Relevant Show, y’all.

Absence as a Blank Canvas

As coming-out parties for A-list performers go, the 2/9 SNL was a pretty great one for Halsey overall. Everybody under a certain age already knows who she is, but as she quipped herself during the opening monologue, “you know when you tell your kids to stop listening to that angry music? I’m that music.” So for at least a decent chunk of the audience, her live performance of “Without Me” might’ve been their first exposure to Halsey’s unique delivery.

As those go, it was pretty outstanding, and maybe the most newsworthy moment of the entire show came when, around the point of the first chorus, the black background and understated piano accompaniment gave way to a box full of scrawled apologies, declaring “I’m so sorry, Ashley” and listing a series of cities in which some sort of indiscretion took place (Chicago, New Orleans, “and other places I don’t even remember”). If you’re up on your celebrity relationships, it’s likely a not-so-subtle jab at G-Eazy, with whom Halsey broke up last year. While the reasons were initially unclear, well, it seems like she just showed up on national television and wrote them all over the walls.