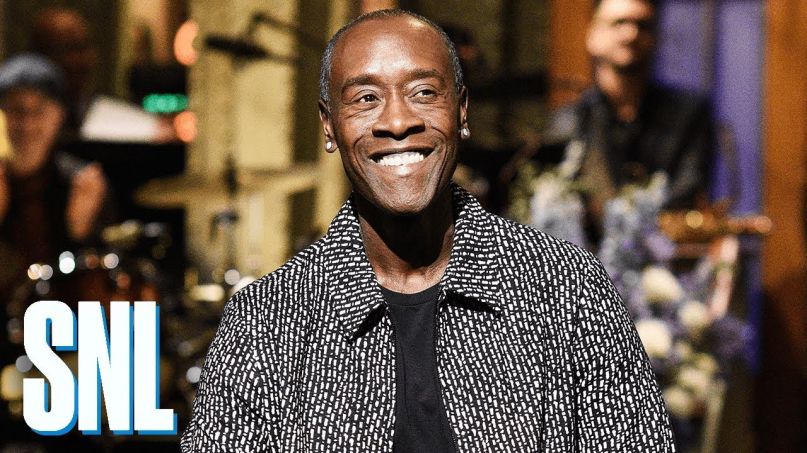 Who doesn’t love Don Cheadle? As the star of Showtime’s new series Black Monday attests in his opening monologue, the venerated veteran actor has done it all — Marvel movies, historical dramas, comedies, you name it. But this week marked his first-ever hosting gig on Saturday Night Live, and based on his performance, it’s a shame he didn’t come on sooner. Unlike a lot of other movie stars, Cheadle’s easy charisma and effortless confidence on stage aided him enormously, beaming through what was clearly a fun week for him.

To be fair, we should have expected him to be a confident hand at sketches — Funny or Die’s hip-slapping Captain Planet sketches proved that — but Cheadle breezed his way comfortably through a live show with all the experience of a seasoned vet. Of course, while the sketches themselves largely stayed free from politics, he and musical guest Gary Clark Jr. made sure to keep the voice of resistance loud; the former through his songs, the latter through careful wardrobe choices. But more on those later.

Even Saturday Night Live is Sick of Covering Trump

Given the show’s spotty track record with its hot political takes, it was nice to see an SNL largely bereft of Trump coverage (musical guest excepted). The low spot, of course, was the limp cold open, in which Alec Baldwin returned to play Trump after a short absence. Apparently, his time away didn’t allow him to bring anything fresh to the table; his Trump was even more off-target than normal, a quiet, scratchy delivery making him sound more like Bill Clinton at points. But who knows? Maybe this is also the fault of the material they’re trying to lampoon. After all, how do you make fresh jokes about someone with talking points and vernacular as repetitive as Trump’s?

Even the folks at Weekend Update are sick of it, Michael Che breaking down for an extended riff about his malaise at the show’s repetitive political humor. “I’m sick of making Trump jokes. At this point I just kinda wanna see the wall”, Che says, just to see how Trump reacts to the wall actually being built. Still, the show mined some chuckles out of Alex Moffat and Kate McKinnon‘s giddy Chuck Schumer and Nancy Pelosi, drunk on passive-aggressive power from winning the midterms and the shutdown. “We will not gloat”, they say, even as they titter about Trump being a big boy and ape Pelosi’s real-life side-clap from the State of the Union. A little goes a long way in a world bogged down by real-world shitty news; it was nice that the rest of the sketches largely stood on their own.

From The Great British Baking Show to Nailed It!, American audiences are obsessed with shows about the precision and stress of baking challenges, so “Ultimate Baking Championship” comes along at a brilliant time. At first, the sketch is pretty straightforward — a neat little progression of increasingly flustered, out-of-their-element amateur bakers frazzled at the prospect of having to craft their favorite cartoon characters in meticulous cake fashion. Kyle Mooney‘s Star Wars fan even makes a decent facsimile of “Yoda the giant elf”, but his hands are holding a long, green, suspiciously rod-like object in front of him. When asked what it is, Mooney gleefully responds, “Why, it’s his penis, of course!”

But the sketch soars when it turns into full-on body horror; Cheadle’s overwhelmed baker, tasked with creating Cookie Monster, ends up making a sloppy, googly-eyed monstrosity that looks like Jeff Goldblum at the end of The Fly, which comes to life and begs for death (“Send me to hell where I belong!” it cries out in the anguished voice of Kenan Thompson, while blue gunk vomits out of its cake-hole). It’s one of those sketches that’s saved by inventive prop work, but damn if it doesn’t do the job.

While Don Cheadle and the rest of the SNL cast kept things light and had fun with silly cakes and sketches about dog-sized fuck tents so your dog doesn’t disturb you during the deed, musical guest Gary Clark Jr. kept things serious, intense, and surprisingly compelling. The tall, deeply earnest singer-songwriter set the mood with his first set, the sensual, blues-tinged ballad “Pearl Cadillac”, affecting a real Lenny Kravitz vibe with his soaring falsetto and Certifiably Hip wide-brimmed hat.

But the real highlight of his performance was the passionate, searing anti-Trump protest song that followed, “This Land” filled with righteous anger at the sorry state of anti-black violence in this country (“I see you looking out your window / Can’t wait to call the police on me”) and an even more righteous guitar solo to close it out. The lyrics were slightly sanitized — “run,run / Go back where you come from” is missing a certain highly-charged epithet — but “This Land” remained a more effective political statement on America’s long-standing history of systemic racism than anything SNL could pull off in a sketch.

(Related note: Cheadle introduced the second song wearing a “PROTECT TRANS KIDS” T-shirt, adding to Clark’s activism with a subtly powerful statement all his own. He even closed out the show wearing a CCCP jersey with “Trump 45” on the back.)

Mika Can Defuse Even the Tensest of Situations

Like a lot of SNL hosts before him, Cheadle was often relegated to playing slightly goofy side characters, but he handled them with charm and a wide, enthusiastic grin. But his finest, most infectious moment of the night came in a sketch in which he and a mulleted barfly (Beck Bennett) ready themselves for a bar fight to settle their differences, only to get wrapped up in the bright, bubblegum beat of Mika’s 2007 song “Lollipop”. The two confused rednecks start moving uncontrollably to the beat, the sketch playfully moving its way through the entire song — eventually wrapping the entire bar’s worth of patrons into a shockingly well-choreographed routine to the aughts-era bop.

It’s a teasing play on the malleability of modern masculinity, a great showcase for Cheadle and Bennett’s comic timing, and just a neat excuse to listen to a cut from one of the best forgotten glam-rock albums of all time. (Seriously, if you could craft a “I’m definitely at least bi, but won’t figure it out for a few years” starter kit, Life in Cartoon Motion would definitely be on there right next to Scissor Sisters and at least one Bjork album.)