The spooky rockers are joining forces for the "Twins of Evil: Hell Never Dies Tour" 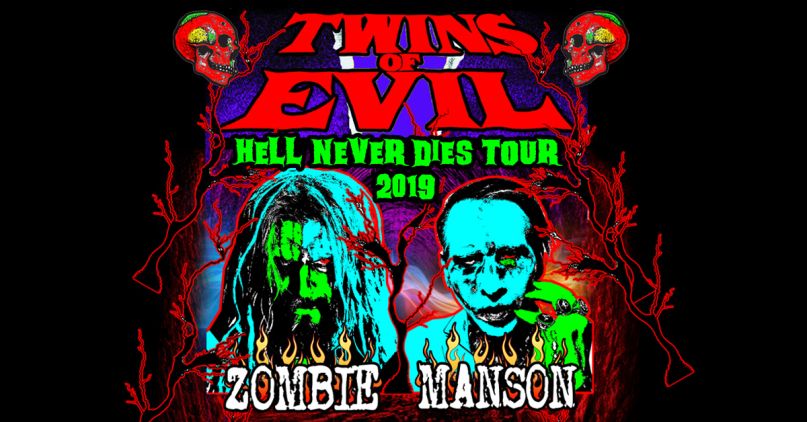 Rob Zombie and Marilyn Manson are enjoying each other’s company so much, they’ve decided to embark on a third outing of their “Twins of Evil” tour.  This time, the trek is dubbed “Twins of Evil: Hell Never Dies Tour 2019”, and it runs for six weeks this coming summer in North America.

The new leg kicks off July 9th in Baltimore, Maryland and wraps up with an August 18th show in Gilford, New Hampshire. Along the way, both Zombie and Manson will play the Wisconsin festivals Rock USA and Rock Fest.

The two rockers last teamed up this past summer for the “Twins of Evil: The Second Coming Tour”, and we had a photographer at the show in Holmdel, New Jersey; see our photo gallery here. During that tour, Zombie and Manson teamed up onstage to perform a cover of The Beatles’ “Helter Skelter”, which they recorded especially for the outing.

Zombie will unleash a new album this year, although no title or release date has been announced as of yet. He’s also wrapping up work on his new movie, 3 From Hell. According to the tour press release, Manson is working on a new album, as well, but no specifics were given.

Tickets for the summer tour go on sale this Friday, February 22nd, via Live Nation, with presales starting as early as tomorrow. Tickets will also be available on StubHub.