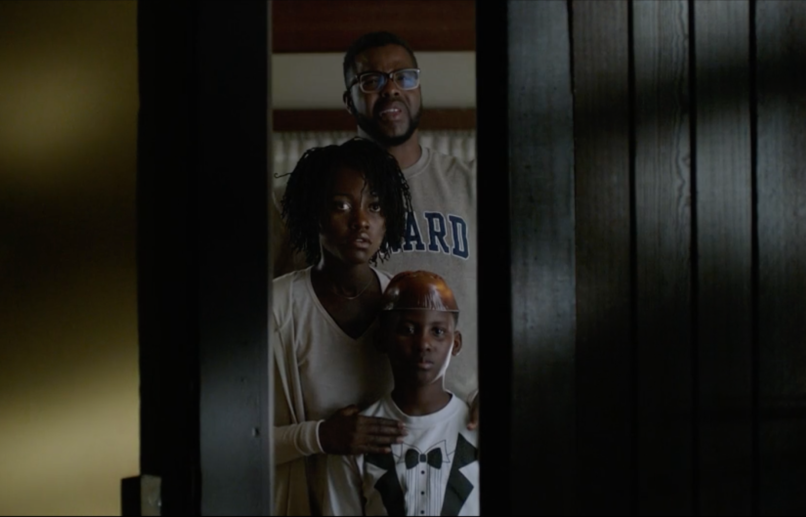 Ahead of tonight’s Super Bowl LIII, Jordan Peele has shared another trailer for his highly anticipated horror flick, Us, which arrives on March 15th. Granted, it’s only a minute long, and seems to be an abbreviated version of the film’s first Christmas trailer, but adds some terrifying new imagery we hadn’t seen previously, particularly what Lupita Nyong’o and Winston Duke are up against.

The film follows Adelaide (Nyong’o) and Gabe Wilson (Duke), who take their kids back to Adelaide’s childhood beachside home in Northern California for the summer. Everything seems fine, they even spend a day with the Tyler family (Elisabeth Moss and Tim Heidecker) by the beach, that is until they’re visited at night by four very familiar figures.

Those expecting some of the same political context of 2017’s Get Out might want to temper those expectations. This past week, Peele told Rolling Stone, “I’m such a horror nut that the genre confusion of Get Out broke my heart a little,” admitting, “I set out to make a horror movie, and it’s kind of not a horror movie.”

With Us, however, he says it’s a straight-up horror film:

“It’s important to me that we can tell black stories without it being about race. I realized I had never seen a horror movie of this kind, where there’s an African-American family at the center that just is. After you get over the initial realization that you’re watching a black family in a horror film, you’re just watching a movie. You’re just watching people. I feel like it proves a very valid and different point than Get Out, which is, not everything is about race. Get Out proved the point that everything is about race. I’ve proved both points!”

In the same profile, he also said he found inspiration for Us from The Twilight Zone episode, “Mirror Image”, starring Vera Miles of Psycho. The episode is currently available to stream via Netflix and should give you a nice preview of the kind of subject matter he’s trying to tackle here. That reference of his also gives us confidence for his forthcoming reboot of the series, which premieres April 1st.