Jonas Akerlund, Rory Culkin, and Emory Cohen Dive Into the Mayhem That Is Lords of Chaos

"I felt that to make this movie just dark ... it wouldn’t work" 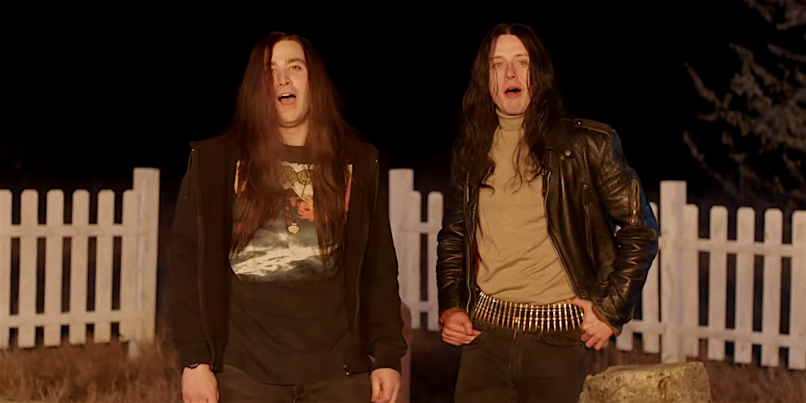 Emory Cohen and Rory Culkin in Lords of Chaos

Lords of Chaos, a new movie based on the tumultuous and terrifying story of the Norwegian black metal band Mayhem, recently debuted in theaters.

The film centers around Øystein Aarseth, aka Euronymous, played by Rory Culkin, as he forms Mayhem and experiences the highs and horrific lows of the band, including the suicide of singer Per Yngve Ohlin, aka Dead (played by Jack Kilmer).

We also see the evolution of Varg Vikernes (played by Emory Cohen), who starts out as an awkward fan of Mayhem, but goes on to create his own music as Burzum. Eventually, he joins Mayhem, embraces Nazism, burns down a few churches, and takes part in the infamous and gory climactic scene between him and Euronymous.

The real-life story of Mayhem is the stuff of legend in the metal world, and director Jonas Åkerlund, known for his work in music videos, has brought it to life with a film that is, at times, quirky and disturbingly violent.

With Lords of Chaos expanding into more theaters this weekend, and available via Video On Demand, we recently sat down with Åkerlund and stars Culkin and Cohen to dive into the movie, and get their thoughts on black metal music, Åkerlund’s own time in the extreme metal band Bathory, Varg’s reaction to the film, and more:

On whether there was concern that Lords of Chaos, despite depicting real-life events, paints a disturbing picture of heavy metal to the rest of the world

Jonas Akerlund: Not really. Number one, it happened so long ago, and I think a lot of people know this is isolated to these few people at that very moment. I don’t think this represents metal or extreme metal, in general, in any way. And anybody who knows anything about metal probably wouldn’t be offended. If the rest of the world looked at this film, and thought this is what metal is like everywhere, I think that would be a big failure for me. Because obviously, it’s about these characters at that time.

Rory Culkin: I have a great deal of respect for black metal, doing the research and everything, but I think if I had to choose, my allegiance is more with Øystein and his family. If anything, I’m trying to tell the story of a person, and not of Euronymous, the demon.

And I think they went into adulthood very early, so there’s still a lot of childish behavior that goes throughout the whole film. And rock ‘n’ is fun. There’s got to be a sense of humor. Spinal Tap is still the best rock ‘n’ roll movie ever made. I felt that to make this movie just dark, and not have any of these jokes, it wouldn’t work.

RC: From the outside, the choice would to play into the legend. But as soon as you start learning about [Euronymous], it’s like, oh, his favorite food was spaghetti. He’s a person. He wasn’t this character 24/7. And I think he was sort of playing a character. There’s that one interview with Euronymous, the audio interview where he’s speaking Norwegian, and I think he’s putting on a voice. I think he’s trying to deliberately sound spooky.

On playing Varg Virkenes, who starts out in the film as a nerdy fanboy but then turns into dark sinister character

Emory Cohen: Well, you need to have somewhere to go with Varg. You can’t start off and he’s already found himself. I mean he even changes his name throughout the movie. I really liked looking at Varg as a shy kid who wanted to play Legos with the other boys. The scene where Varg is just at the party, and he’s watching everyone. I remember thinking about what it was like going to a new school for the first day, and watching all the other kids play, and wanting to make friends, but not knowing the rules. He didn’t know the rules.

JA: I went through the whole thought process. I was writing this in Swedish and Norwegian years ago. And it was a little bit of a conflict because the first thing I thought of was to make this true and real and as close to the realities as I possibly could. But I also feel like this movie translates into a much wider audience than just a Scandinavian audience. So, for me, I just felt like I had to write it in English, and work with English-speaking actors. And for us to work in an accent was never really an option.

We tried to have a transatlantic type of non-accent in there, but I felt like if this was every going to be an issue, the movie had bigger problems. So, we didn’t really pay much attention to it, and I was actually ready for more questions about it. You bring it up now, but it hasn’t really come up that much. And I’ve also scene movies where they add an accent, and it never really works.

On the research they did on Mayhem, Varg, and the black metal scene, and if they contacted the surviving Mayhem members

RC: Sure, we spoke to Attila, who’s the current lead singer of Mayhem — and his son actually plays him in the film. And some of the girls who were hanging around the scene. It was pretty beneficial.

JA: And I was in contact with all of them early on, which I had to do, because I needed the music in the movie. I couldn’t have done the movie without the music. I wanted to treat, especially Euronymous’ parents and Per’s brother, with respect, so they read early versions of the script, and were involved. Same with [surviving Mayhem members] Necrobutcher and Hellhammer. Problem was that Euronymous gave a lot of credit, like every song had like 10 different people who had to approve the usage of the music. So that was a big challenge. But I’ve been in contact with pretty much everybody except Varg.

Varg has been the one that has been the most outspoken, and he told this story so many times. So, I never really felt like I needed him. And never asked for his music, because I know he was going to say no, so there was no point. And we felt in terms of developing the character, it was already there. He told it so many times, so we knew enough from him.

EC: Who better to play him than a nice Jewish boy from the Upper West Side!

JA: Obviously, the story [of Mayhem] is very different, but I feel like the first act of the movie was very much like we were when we started out. We were trying to find our sound. We were inspired by a lot of different things. We watched movies. We were only a few years ahead [of Mayhem], so we watched the same movies, we listened to the same music, pretty much looked the same. We were awkward around girls, and we did our small gigs. I also had my sister watching us in the basement telling us we sucked. All those things happened to me, too.

From that point, I left for filmmaking kind of early, and the fact that Euronymous was so driven, we didn’t have that at all. Starting your own label, opening a record store, touring, recording, signing other bands, burning down churches, and killing people, it’s a lot of work, and it required a lot of driven young men to get that done. We were slackers, we were just playing, hoping to make it one day. So it was very different.

RC: Yeah, I mean, that’s a given. We would be failing if it wasn’t [emotional]. I think we tried to feel those things as much as we could.

EC: It was also super technical. A lot of it was about the technicality. And when stuff becomes technical, it kind of makes you commit more, because I get scared I’m gonna screw it up. Because if you mess up … if you’re going to want to play a moment differently, that’s one thing, but messing up something technical makes you feel a little silly.

On the choice to have minimal music performance in the movie, other than the one major concert scene

During that time, they were not that productive. They didn’t write that much music. Obviously, they had more gigs. We made one of them, which is the legendary gig that everybody’s know about. We made that as one of the big performances. In the beginning, they play and learn their instruments and find their sound. I kind of like not having the music in there for a while, because the next time we come back to them, we hear that they’re so much better. They found their sound. They got a new singer [Dead] and they play really well. And I think Varg coming in the band, who was way more productive. I mean he recorded way more than Mayhem ever did.

And also, it was never meant to be a movie about music, really. It’s there and it should be there, and it’s part of it. But I think it would have been painful to have more in there. It’s just enough for a big screen to hear that music. Too much is painful.

On the biggest difference between directing feature films and music videos

JA: It’s longer! [Laughs] It’s a different type of commitment, especially this movie, because it’s been a passion project of mine for so many years. And when you do music videos, you’re basically a hired gun, and this is like my project, so it’s a little different.

EC: Yeah, I mean we spent about a week trying to learn how to fake-play the songs, and that was hard enough. I was learning some stuff on the drums, and I wasn’t even learning the foot pedals, but just realizing how fast and how tight some of their stuff was. That was what gave me an appreciation for it, was understanding that I definitely couldn’t do it. I couldn’t play it. I certainly couldn’t write it.