Film Review: The Lego Movie 2 Shows Us That Everything Doesn’t Have to Be Awesome

The sequel to the 2014 hit loses some luster, but updates its humor and themes in interesting ways 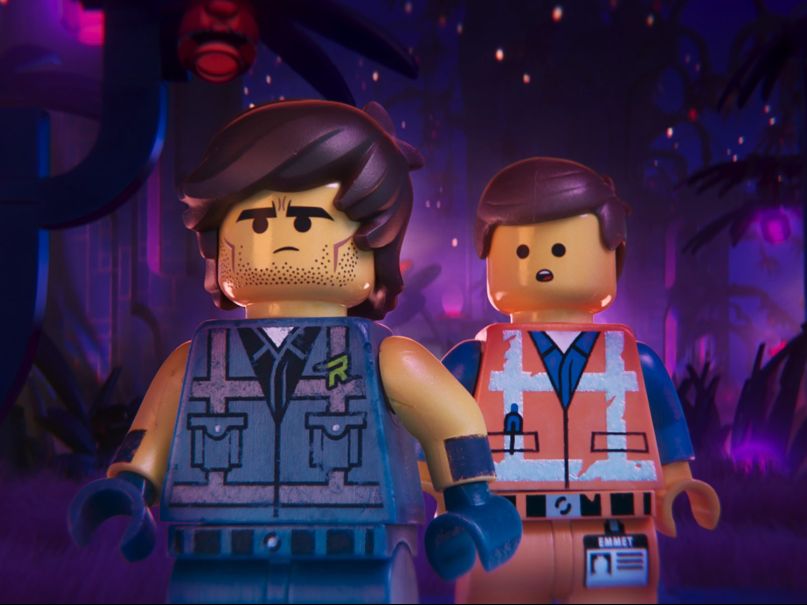 The Pitch: Years after the events of The LEGO Movie, the ongoing war between Bricksburg and the planet Duplo has reduced our heroes’ world to a Mad Max wasteland known as Apocalypseburg. However, while the rest of the Master Builders (Elizabeth Banks‘ Wyldstyle, Will Arnett‘s Batman, and others) have hardened their hearts and grown gritty and brooding, Emmet Brickowski (Chris Pratt) is as sunny and childlike as ever. But when a brand-new attack results in the capture of the rest of the Master Builders, Emmet races off to save them, hoping to grow up with the help of rugged adventurer Rex Dangervest (also Pratt). Meanwhile, Wyldstyle learns that the Systar System from which the Duplo army hails — and their shape-shifting leader, the alluring Princess Watevra Wa’Nabi (Tiffany Haddish) — aren’t quite what they seem.

Everything’s Less Awesome!: Few could have anticipated the complete and utter success that The LEGO Movie would turn out to be when it was released in 2014. What seemed like a cynical cash grab for everyone’s favorite brand of interconnecting Danish bricks ended up a sweet, smart, funny investigation of modern action filmmaking trends, not to mention an incredibly sincere exploration of the importance of play in our lives. Since then, though, the world’s grown darker: racism and authoritarianism are on the rise once again, political and social divisions are ripping families apart, and people feel helpless against the quickly-approaching specter of climate change.

Strangely (and smartly) enough, Phil Lord and Christopher Miller, who return to pen the script, have adapted The Second Part to adjust for this new world. At the end of the first film, we learned that the film’s story was a tale spun by young Finn (Jadon Sand), a boy playing with his LEGOs to deal with his father’s (Will Ferrell) neglect. What happens when a kid like that gets older? Like most young men, he grows colder; from the opening minutes, one can tell that Finn’s had Mad Max: Fury Road on repeat for months. He’s resentful of his young sister Bianca (Brooklynn Prince from The Florida Project), who just wants an opportunity to bond with her brother. Like the best family movies, The Second Part uses its gloss of bright colors and pop culture references to reflect the experiences of kids growing up, and the insecurities and conflicts that go along with it.

More broadly, The Second Part manages to complicate the previous films’ sentiments in a sneaky, rewarding way. The film’s first half threatens to be a shallow rehash of the established aesthetic — it’s not hard to lose some enthusiasm for the series’ dazzling LEGO animation, which giddily toes the line between realistic CG and the stop-motion anarchy of kids bashing their toys together. The miracle of the first film, after all, is half a decade old, so pop culture has had time (and a Batman spinoff movie) to get used to it. But as the final act rolls around, and the story’s handling of its characters grows more complicated, the sequel’s deceptive charms become more fully realized.

This Song’s Gonna Get Stuck Inside Your Head: One of the sequel’s most dedicated changes is its doubling down on bubbly, self-aware pop songs. “Everything is Awesome!” was a certified banger, after all, and got an Oscar nomination for Best Original Song, so why not replicate the formula? Well, in addition to the aforementioned bop (which Emmet continues to love, to the annoyance of the other characters), pop-song parodist and comedian Jon Lajoie (The League) comes aboard to spin several new yarns about the characters’ motivations. The most obvious successor to “Everything is Awesome”, of course, is “Catchy Song”, a bubblegum-flavored dance track that makes good on its single lyric’s promise that “this song’s gonna get stuck inside your head.”

As Watevra, Haddish gets quite a few torch songs of her own, her constantly-changing form whipping and winding through showy numbers about not being “suspicious at all”, or a passive-aggressive seduction song about loving Superman (Channing Tatum) to coerce Batman into marrying her. Lajoie has long been a master craftsman at pairing accurately-rendered pop music production with comedically blunt lyrics about the songs themselves (“please use this song/In your commercial”), and the tracks he presents here are admirable additions to his existing body of  work.

Also, be sure to stick around till the credits for “Super Cool”, a gut-busting encore from Beck (featuring The Lonely Island) singing about the majesty of the credits (and even some of the crew members themselves).

Pratt Falls: Chris Pratt has gone through a fascinating career trajectory in the time since The LEGO Movie came out (the same year he debuted his beefy, modern action persona in Guardians of the Galaxy). Never one to miss some fourth-wall-breaking metacommentary, the dichotomy between Old and New Pratt is at the emotional center ofThe LEGO Movie 2. Rex Dangervest is a rugged, feathered-haired bad boy who runs through the galaxy in his own spaceship with his army of trained velociraptors. Any of this sounding familiar? As Rex, Pratt even affects the John Wayne-meets-Midwestern drawl of Kurt Russell, who famously played Pratt’s dad in Guardians Vol. 2. A smirking, brooding warrior with a tragic backstory, he feels like the most artificially-grafted elements of Modern Chris Pratt’s star image thrown together.

Seeing Rex interacting with the sweet, innocent Emmet, the latest in a long line of characters telling him to “grow up”, The LEGO Movie 2 tacitly explores the dark side of that same maturity. In an age where society has largely tired of Pratt’s muscle-man transformation and want him to just go back to being dad-bod Andy Dwyer, The Second Part makes a strong argument in support of that position. Rex’s brand of roided-up, go-it-alone masculinity is a thing of the past, and it’s high time that characters like Andy and Emmet were valued the way they ought to be.

The Verdict: “Everything’s not awesome”, a character sings to Emmet near the film’s climax, and it would be easy for cynics to describe The Second Part in a similar fashion. For most of its runtime, the film seems content to coast on the goodwill engendered by the series’ previous two entries, and its bevy of side gags don’t have the same inventive snap this time around. But The Second Part is a film almost wholly redeemed by its climax, a culmination of unexpected plot threads and surprisingly sweet character development that ends up making the whole more valuable in hindsight. Sure, the world’s less awesome than it was a few years ago, but that doesn’t mean we can’t make it better if we work together. Hopefully these values, like certain songs, will get stuck inside its audience’s heads (and hearts).

Where’s It Playing?: The Lego Movie 2: The Second Part builds a double-decker couch inside your heart on Friday, February 8th.