Film Review: Climax Spirals Into a Wild, Drug-Fueled Haze of Sex and Violence 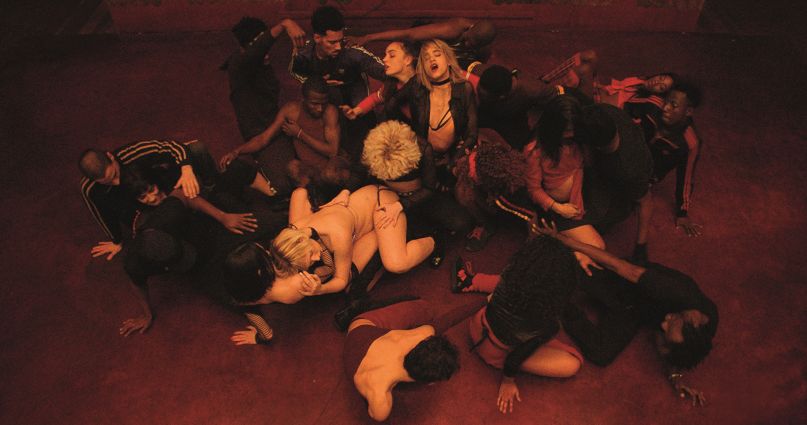 The following review was originally published as part of our coverage of the 2018 Toronto International Film Festival.

Climax begins in typically Gaspar Noé-esque fashion: tip-toeing toward sensory overload with supersaturated colors, filled with equal parts malice and promise as a bloodied body crawls artistically through the snow. And what follows provokes a response almost as typical of Noé now: a cacophonous mix of glowing praise, some screening walkouts, a few screeds, and the occasional shrug.

Based on the true story (according to the credits — whether this is actually true, or true like the events of Fargo were “true,” is unclear), Climax follows the chaotic descent of an experimental dance troupe after their sangria is spiked with LSD on the eve of an American tour. Getting to that moment, though, is where the film truly shines. Like stacking sexually and violently charged dominoes, Noé and his cast/collaborators (a collective including actors and dancers who were discovered everywhere from clubs to YouTube videos) piece together a complex and charged dynamic between a disparate crew.

These divergent perspectives and personalities are first introduced via a series of audition tapes (played on a TV flanked by VHS tapes and books filled with references that will probably not come as a surprise to anyone who has ever seen a minute of Noé) where their goals, their visions of what dance should be, their concepts of America, and what they would do to get ahead are discussed in cool, casual detail. They come together in a rapturous dance number, perfectly executed by the cast and captured in stunning fashion by the camera. The schisms begin to show as we drift from one conversation to the next, voyeuristically creeping from awkward small talk to the admonishments of a disapproving brother to observations on dance, child-rearing, and anal sex. Then the sangria kicks in, and both civility and the group begin to crumble. And Climax, more often than not, descends right along with them.

(Interview: Climax Director Gaspar Noé on Modern Cinema and Why He Skips Star Wars for Documentaries)

Noé clearly has a fondness — and, arguably, a talent — for gleefully exploring and exploiting the depravity and hollowness that bubbles beneath the surface of humankind through intensely physical performances. He made brutally realistic violence perversely compelling in Irréversible. He turned real (3D!) sex scenes into empty cries of ennui and despair with Love. Now, he and his cast have used dance as a means of expressing a Lord of the Flies-like breakdown of polite society. While this generally makes for interesting viewing, though, it doesn’t always make for convincing viewing., especially when other cinematic experiments with similarly physical storytelling have come to far less cynical conclusions.

Shortbus‘ explicit sex scenes, for example, found catharsis where Love found only a cold, ironic take on its own name. Where Climax sees only darkness in intense, full body expression, other works of art — everything from The Fits to a good Hiroshi Tanahashi match — have hinted at something bordering on transcendence. This often makes Climax feel like more of a flailing work of provocation trying too hard to shock or unnerve than a searing romp through the id of a counterculture collective on LSD.

Climax works best when it holds back from those impulses just a little, teetering and teasing complete drug-induced collapse without giving into full indulgence of any kind, including self-indulgence. It’s most intoxicating when we’re doused in the same sensory overload as the characters, stumbling through the hallways of their practice space with them as if we’ve been plunged into a hallucinatory haunted house, hearing menace, seeing it out of the corner of our eyes, and anticipating it without yet being engulfed in it.

That paranoid high starts to fade right around the time that one of the dancers is literally engulfed in flames, though, the film eventually plunging so far into over-the-top depravity that it starts to feel cartoonish and hollow. There’s some skin scratching. There’s a lot of floor writhing and fighting. There’s a touch of womb kicking. A remix of Soft Cell’s version of “Tainted Love” throbs predictably in the background for a while, because that song hasn’t suffered enough indignity since Marilyn Manson dragged it onto Not Another Teen Movie‘s soundtrack.

As a parade of exaggerated neon-soaked atrocities, Climax is certainly never boring, but it often strains credulity where it aims to provoke genuine discomfort. It exhausts where it should provoke. It comes close to scandalizing a few times, but can’t quite reach that peak. All of that conflict leaves the whole proceeding feeling a little like a faked version of the film’s titular act.