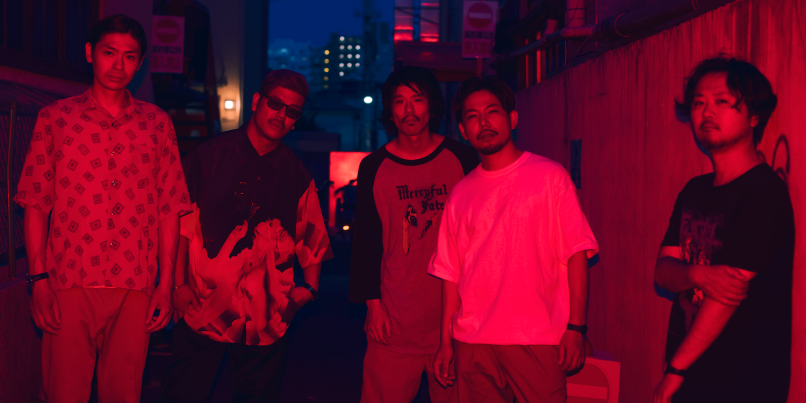 Japan has long been a foothold for unrelenting hardcore and noise music that makes no compromises about punishing listeners. Artists like Merzbow, Boris, Envy, and Gauze have become pillars of extreme music worldwide and inspired a strong and fervent hardcore fan base creating a diverse body of harsh music.

Tokyo band ENDON appear ready to accept the torch as one of the leaders of Japan’s next wave of experimental acts. The band has been making waves at home and abroad due to a vicious live show and relentlessly energetic records.

Rooted in grindcore, the band has gone on to seamlessly blend thundering guitars, rapid blast beats, and an onslaught of samples with functional pleasant melody for what the band uniquely describes as “catastrophic noise metal.” ENDON’s fury is brought together by vocalist Taichi Nagura’s lyric-less screeches, howls, and pants that convey more emotion than a lot of artists are able to with words. ENDON thrive on the unexpected, and on their new album, Boy Meets Girl, Nagura offers up some lyrics on select tracks.

Heavy Consequence and ENDON have teamed up to unveil the second single, “Love Amnesia”, from Boy Meets Girl, which can be pre-ordered via Thrill Jockey prior to its February 15th release. In addition, Nagura was happy to discuss “Love Amnesia”, ENDON’s writing process, and the new album with us in the Q&A below.

On ENDON being shoehorned into grindcore, and possible surprises on the upcoming Boy Meets Girl

First off, I appreciate you saying the band was shoehorned into grindcore. To me, our melodic elements on [our 2017 album] Through the Mirror are so obvious and I expected that ENDON would be recognized in that way, but I encountered a lot of opposite responses or reviews, especially in Japan. Additionally, ENDON never intended to play post-black metal, emo, or emo-violence, because those genres have a totally different measure of intensity than we have.

To answer your question, the new elements that will surprise fans would be important but more importantly we do not want to get bored ourselves. Every member of ENDON has been a very good loyal customer of ENDON’s music. Let me say we trust ourselves as the most trustworthy customer. (Laughs) Anyway, it should be obvious that ENDON tried new stuff on Boy Meets Girl.

On the songwriting formula, what changes, and what stays the same

As far what changed on Boy Meets Girl goes, we were inspired by original US west coast punk rock bands that have a stronger beat. One of our basic concepts of the album is “light music being played by heavy sound”. The guitar tuning is getting way lower than previous records, Koki [Miyabe] played baritone guitar and Shin [Yokota] played a different drum kit with different tuning to the drums.

There are many differences in sampling, too. On Mama and Through the Mirror, sampling was more like a tribute to Schimpfluch-Gruppe. In that respect, the samples represented speed or chaos and dominated the music. It is simpler and way more compact this time, with samples being used as if they are an individual instrument. A couple of songs required lyrics, as well.

Listening to our music from our first EP, Acme Apathy Amok, to Mama, then to Through the Mirror could be very similar to reading a book, from one chapter to another of one story. In that sense, Boy Meets Girl is a continuation and the next chapter.

On making their grooviest music yet

It was not conscious decision to offer more melodic or groovier music, we just wanted melody and groove themselves. From the beginning of the band we have had this concept of, “to improve the functionality of noise music”.

There has been noise music way before we started this band, (but we felt that the) noise was just a certain part of the music. To explain more, ENDON are looking for an original idea both from “noise” and “music”, not from “noise music”, you know? A relationship between noise music and us.

Well, that idea of “the soundtrack to a horror film” was created in hindsight. It was actually not the original concept during the songwriting process. As mentioned previously, music from ENDON seems to be a collective autobiographical novel, which is one of the biggest motifs of our songwriting.

On ENDON’s live show, and what the band tries to convey

I don’t prepare anything for live performances in advance and there is no specific message. We just strive to have the most intense joy we can. I won’t deny anyone’s interpretation or prediction about our music at all, though. My desire is to keep ENDON’s music strong, indigenous, and everlasting.

* = with Neurosis, Converge
^ = with SUMAC, Baptists