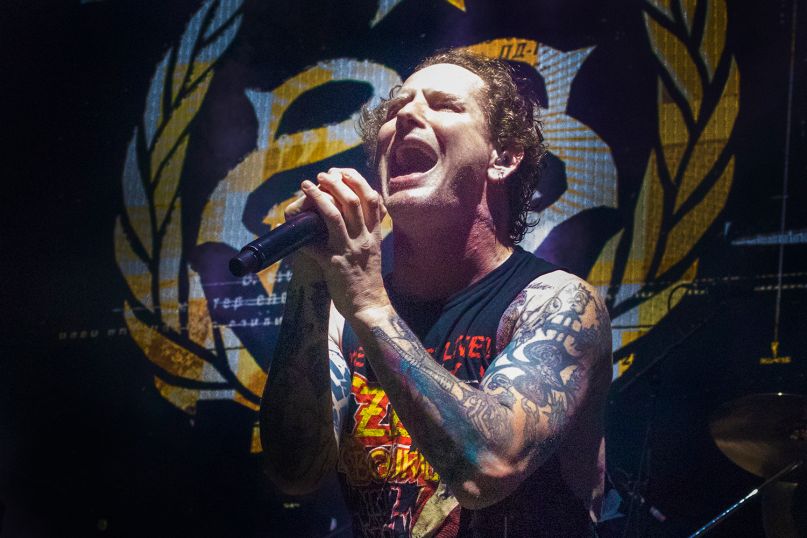 Have the icy hearts of music fans started to thaw towards Nickelback? Maybe so, according to Slipknot / Stone Sour frontman Corey Taylor.

Making an appearance on Tuesday’s edition of Jonesy’s Jukebox, the radio show hosted by Sex Pistols guitarist Steve Jones, the subject of the rock world’s favorite punching bag came up with Taylor insisting that Nickelback is no longer the most hated band around. “They are passing the baton to Imagine Dragons,” Taylor said, adding, “And I love it.”

“[Imagine Dragons are] awful, so that’s cool,” Taylor continued. “And they’re from Vegas so I’m gonna go home to protests. Can’t show my face in this town now. Yeah, people are slowly coming back to appreciate Nickelback and then just turning their irksome ire towards Imagine Dragons.”

Coming out of the mouths of most artists, that kind of comment wouldn’t warrant more than a shrug, but relations between Taylor and Nickelback frontman Chad Kroeger have been tempestuous over the years.

Back in 2002, the Slipknot vocalist referred to Kroeger as “Shaggy from Scooby-Doo” in an interview and deemed the rest of Nickelback as “f**king pretty boys.” Kroeger returned fire as recently as 2017, telling an interviewer that Stone Sour sound like “Nickelback Lite” and saying of Slipknot, “How good can your music be if you’ve got to beat each other up onstage, throw up in your own masks every night?”

According to Taylor, he got a call from the rest of Nickelback not long after that, apparently distancing themselves from Kroeger’s comments. Taylor told radio station WMMR that the other Nickelback members told him that they didn’t share the same sentiments as their frontman. He added, “I had hung out with the band before and they’re super-cool dudes. So I was, like… Well, I figured it wasn’t them. So I don’t want people holding it against the band, because it’s not them. It’s Captain Ego from Planet Douche.”

In another 2017 interview, Taylor didn’t so much apologize for what he initially said about Kroeger, but did insist that his issues with alcohol were partially to blame.

“I said something maybe, like, 15 years ago, but I was drinking then. Nobody was listening to me then,” Taylor said. “And I haven’t said anything since. I don’t even think about him. For real. This came so far out of left field that I woke up to everyone, like, blowing me up. And I was like, ‘Really?!'”

As for Slipknot, the band is slated to release a new album this summer, with a North American tour expected to be announced shortly. Get tickets here. They’ve already teased fans with a new song, “All Out Life”.