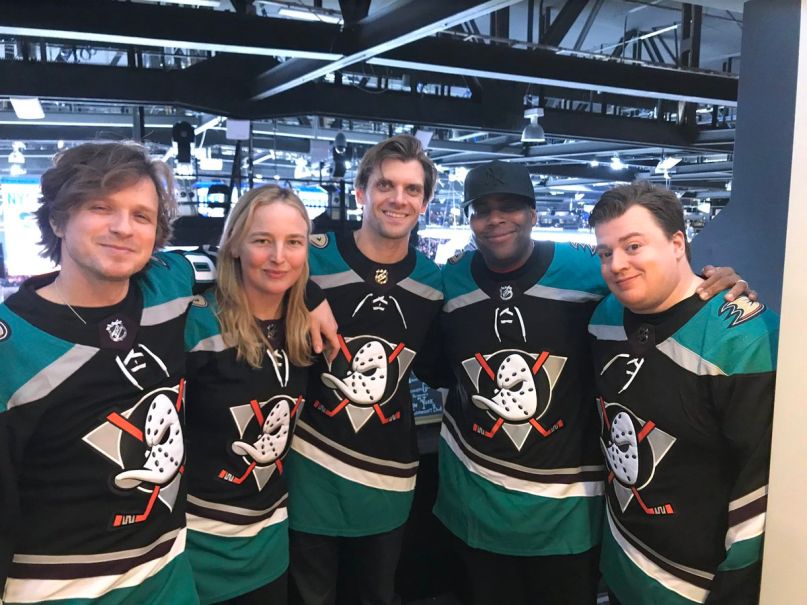 For a trilogy that was never overwhelmingly successful in its time, The Mighty Ducks and its two sequels have stuck around in the cultural consciousness in a way not many of their peers can match. The story of a scrappy Minneapolis team and its law-dodging coach wound up being one of the more memorable family movies of its era, and even the outlandish sequels (which sent its team to face Icelandic twentysomething “kids” in a youth Olympics, and then to a Dickensian private school) introduced the concept of ducks flying together to the American mainstream, and remains a staple of dorm rooms and overenthusiastic parents’ VHS collections to this day.

Over the weekend, several members of the original cast were spotted at an Anaheim Ducks game, where they took the ice in the classic Ducks colors and were filmed for an unknown purpose. (We’re guessing a Super Bowl commercial, but who knows?) Pete & Pete alum Danny Tamberelli initially released a photo set through his Instagram account:

What a sweet day!! Thanks to the @anaheimducks for a great day reliving my #mightyducks season with some old friends! Photo cred by my lovely wife @katelyndetweiler

Some mighty great people joined us at today’s game!

Some of your favorite Mighty Ducks visited us on Long Island and met a few of our guys after the game. #LetsGoDucks⁠ ⁠ pic.twitter.com/xFsggnYe8v