Film Review: Serenity is the Kind of Nonsense Certain Moviegoers Will Have To See 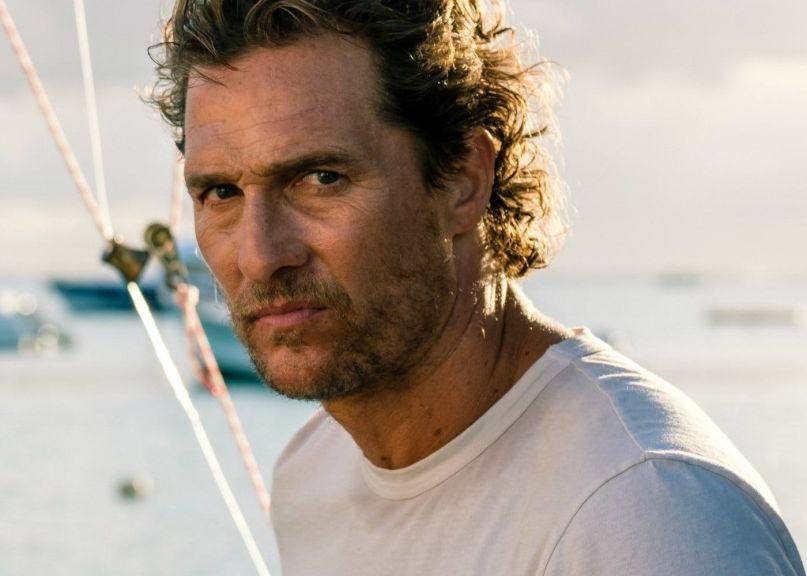 The Pitch: Matthew McConaughey’s just a guy with a boat, man. Well, a guy with a boat, and a murky past. Well, a guy with a boat, a murky past, and some lingering trauma. Okay, it’s a boat, a past, lingering trauma, and a sexy understanding with a local cat-owner (Diane Lane). Sorry, sorry, forgot something: Boat, past, trauma, Diane Lane, and a femme fatale of an ex (Anne Hathaway). Actually. … okay, we could do this all day, so here’s a rough list in full. Deep breath: a boat, a past, lingering trauma, Diane and her cat, Anne the ex, a kid he misses, a drinking problem, a shipping container house overlooking the sea, a sidekick (Djimon Hounsou), a guy in a suit on his tail (Jeremy Strong), some stability issues, and a bone-deep, unrelenting need to catch the giant tuna that is personally taunting him. That tuna’s name is Justice.

The quest for Justice drives Baker Dill — oh, add an alias to the list after the tuna, he’s got an alias and that alias is ‘Baker Dill’ — to extremes. There’s nothing he won’t do to catch that damned fish. Nothing. And then Karen (Hathaway) walks into his dive bar dressed like Barbara Stanwyck and asks him to use his tuna-hunting boat to murder and dispose of her abusive husband (Jason Clarke), who’s a pair of loafers without socks in human form. This is the premise of Serenity, Steven Knight’s work of film noir by way of a bad trip. There’s very little else that can safely be said of it, save this: Serenity is the name of the boat.

Island Living: Baker Dill’s existence is an island existence, and writer-director Knight (Eastern Promises) takes what’s good and bad about living Far Away From It All and injects it into the heart of Serenity. The cast of characters is small, the conversations often repetitive. You can almost feel the warm sun and the cool breeze, and you can definitely feel the percolating madness of being confined to a relatively small place with the same few people, repeating your days over and over again. The same chirpy, banal, oddly specific radio. The same shot of fields flying past a truck window. The same bar, the same old guy in the same wobbly chair, the same beer, the same boat, the same quest for the tuna named Justice. Knight uses this environment to his advantage, and for better or worse, it’s entirely likely that Serenity will make you feel like you’re going just a little bit nuts.

The repetition is disrupted by outside forces, because if it wasn’t, the movie would never, ever end, and this review would never have been written, and this writer would be hovering near unconsciousness in an empty theater somewhere, mouthing a single word through parched lips: Justice, Justice, Justice. But Karen shows up, and so the pins scatter. It’s fitting that Hathaway’s arrival heralds the film’s real beginning — the most genuinely impressive thing about Serenity is the total commitment displayed by the actors as they make their way through this entirely crazy film, and no one does a better job of that than Hathaway. She makes it all work, or almost does — more at home in the noir genre than any of her co-stars aside from Lane, she somehow manages to embody the film’s style, embrace the insanity, and play it all honestly. And although she’s the standout, no one here really drops the ball; Strong (of HBO’s Succession) is a particular treat.

Highlights from 10 pages of notes: There may be no better way to convey the essence of this shitshow than to offer a peek into the real-time thoughts of this writer as she watched it. Selected excerpts follow, spoilers and many extraneous exclamation points omitted.

Did we just zoom through an eye into the ocean and follow a shark?
He named it Justice oh my god
“Mr. Baker Dill, I am growing increasingly fond of the way you say hello”.
“Ever since your wife died we haven’t caught jack shit”
“Percentages aren’t science”
WHAT. WHAT. WHAT.
Like if Moby Dick was The Matrix was The Maltese Falcon was Showgirls, maybe I love it
Anne Hathaway’s side eye = world class
What is even happening
“GRAAAAAAAH! GRAAAAAAAAAH!”
That’s artful.

Oh, Serenity knows: This review will not argue that Steven Knight set out to make a mess of a film. One could use a lot of words to describe Serenity, up to and including “dumb”, “messed up”, and “batshit insane”, but never would the word “lazy” seem appropriate. At times, Serenity is definitely in on the joke — when Hathaway first appears, the giant diamond on her wedding ring emits a computer-generated sparkle that’s definitely not meant to look real. At others, it’s dead serious. There’s an image near the film’s conclusion, after all of its supposed “logic” has been revealed, that’s rich and resonant, almost elegant, speaking to pain and loss in frank, simple visual language. It might be tempting to argue that this film should pick a lane, and stick to it, either leaning into the camp (and this is definitely a midnight movie in the making) or taking the proceedings far more seriously.

Yet to try to imagine Serenity in either lane is to almost instantly render it totally unwatchable. The fun of the camp is that it’s not self-congratulatory; the knowing winks are spread so far apart that the audience seems encouraged to hoot and holler at it, rather than with it, while still removing the sheen of mean-spiritedness that can accompany such experiences. But if Serenity were self-serious, it would be absolutely unwatchable. Instead, it finds a balance in the middle, and gives the impression that all involved — Knight, McConaughey, and Hathaway in particular — are testing the boundaries on either side, seeing how far they can go. The result is a hell of a watch, even if it’s not all that well-made. Serenity somehow simultaneously has no idea and knows exactly what kind of movie it is.

The Verdict: Serenity is often stylish. It is never, ever dull. It is also deeply stupid, asks deeply stupid questions about reality, and often plays out like it was dreamed up by an extremely bored 12-year-old with a lot of issues. It is filled with good actors who do not slack off, even a little. There’s lots of impressive camera work, and Knight stages this hollow, foolish mess with aplomb. The fish is named Justice. The twist is absurd. It is not a good movie. Can’t wait to see it again.

Where’s It Playing? In wide release, for theaters about to be full of curious trash chasers, beginning January 25th.