Donald Trump once threw a tantrum, walked off Conan set after “humiliating” joke 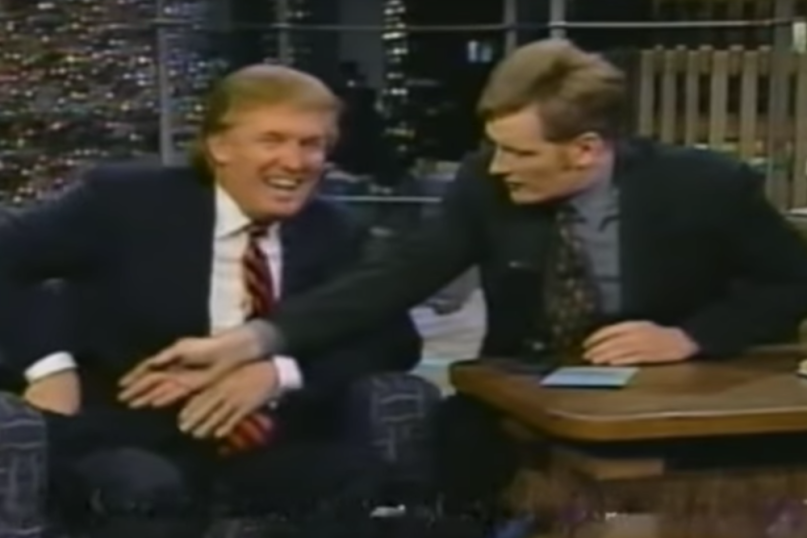 To the surprise of absolutely no one, Donald Trump has been throwing tantrums and breaking promises for decades, long, long before moving into the White House. In a new interview with Rolling Stone, Conan O’Brien recalled one very memorable ’90s encounter with Trump that perfectly captured the businessman-turned-politician’s temperamental ways.

It was 1997, and Trump appeared for the first time on O’Brien’s NBC talk show, Late Night with Conan O’Brien. Wanting to talk money with the business mogul, O’Brien asked Trump to disclose how much money he was carrying. The question led to a hilarious reveal involving a condom:

“How much money do you have on you right now?” [O’Brien asked]. He sort of said, “I don’t know, I maybe have some.” I said, “No, no, what do you have?” Then he stuck his hand in his pocket and he clearly found something. I saw his face change, and I could see that he didn’t want me to know what it was. So I reached over and I was like, “Come on, come on.” I made him pull it out — and it was a condom. He said, “Practice safe sex everybody.” He was in-between marriages at the time.

But, of course with Trump being his usual Trump self, he found nothing funny about the bit. In fact, he was so embarrassed by the joke that he threw a tantrum and stormed off the set during one of the commercial breaks:

“He was pissed. He was really mad. I went to commercial. He stood up. I don’t think he said goodbye to me, and he walked over to my producer and said, “That’s the last time I’m gonna be on this fucking show. He humiliated me in front of everybody.”

As with many of his vows, Trump didn’t keep his word about the show, and actually repeatedly appeared on Late Night seven more times in the following years. “He got over it, clearly,” O’Brien recalled to Rolling Stone.

O’Brien went on theorize why Trump lacks a sense of humor. “I read a piece recently, maybe in The Onion, about how Trump is allergic to humor. To really have a sense of humor, you have to be able to laugh at yourself,” O’Brien remarked, pointing to John F. Kennedy and Abraham Lincoln as examples of presidents who had no problem mocking themselves.

“I think he’s racked with insecurity every day,” the comedian and TV host added. “I think what’s tragic is what he doesn’t understand is that it’s a strength. If he was able to come out and say, “You know what? Yeah, I screwed this up. I’ve made some mistakes,” he would really surprise people. In a way it would confound a lot of people who don’t like him. But he can’t do it.”

As for Trump, his partial government shutdown over the border wall enters day 33, and at least 800,000 federal workers still remain unpaid.