by Michael Roffman and Matt Melis 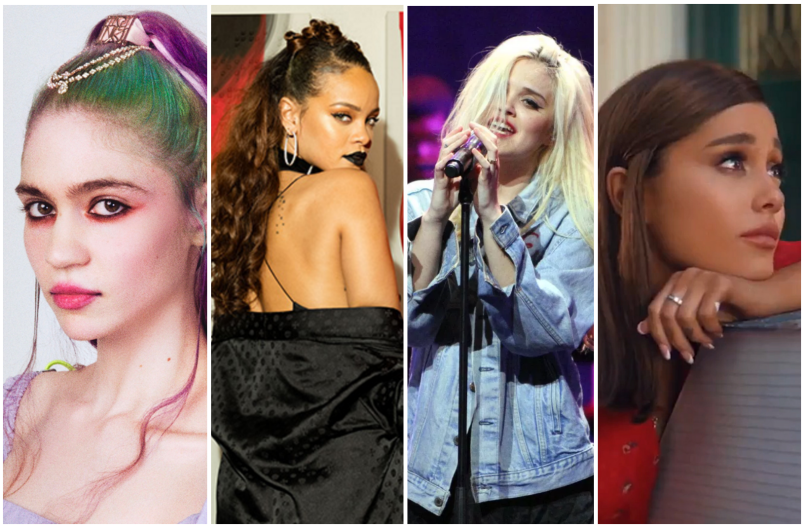 For a genre so indebted to being “in the now,” pop albums sure do have endurance. They’re events, no different than a ’90s Hollywood blockbuster, back when the expiration date wasn’t two weeks after its release and one movie could dominate an entire season.

That’s why when pop albums flop — and, as we saw in 2017, even those at the top can flop — they’re a major story because so much has been baked into them. The production! The marketing! The collaborations! The anticipation! Oh yes, the anticipation.

Anticipation can be poison for pop artists. They roll out an album, they live with said album for a few years (unless, you know, they’re Lana Del Rey), and they retreat for some time. But if anticipation leads to disappointment? “Thank you, next.”

That kind of dismissal isn’t just felt, it’s worn until the next cycle begins, which is why pop artists are such a rare breed and why the greatest pop albums demand so much respect. They’re almost an anomaly. Think about that as the anticipation settles in ahead.

Rest assured, it will.

Why We’re Excited: 2015’s Emotion cemented Carly Rae Jepsen as so much more than a one-hit pop wonder. The Canadian pop star’s third album found her upping the ante with banger after banger that shed the teen equivocating of ultra-hit “Call Me Maybe” and found a more mature singer telling listeners precisely what she wanted — no maybes to be found. That same confidence has spilled over to “Party for One”, the first single from Jepsen’s upcoming fourth record. For an artist whose biggest hits tend to be about relationships, it’s almost empowering to see Jepsen learn that a little self-love and a night in makes for a far better evening than time wasted on a scrub. Still, knowing Jepsen, we wouldn’t be shocked if her quiet, little party turned into the biggest bash of the year. –Matt Melis

Why We’re Excited: After lending her voice to everyone from Cat Power to Andrew Lloyd Webber in 2018, Lana Del Rey spent the latter half of the year teasing listeners with two samples — “Mariners Apartment Complex” and the sprawling “Venice Bitch” — from her upcoming sixth album, Norman Fucking Rockwell. She’s followed that up with the live debut of another song expected to be included, “How to Disappear”, and the promise of a third single a week from yesterday. Let’s just say that Del Rey’s teasing has worked. While the artist has described the Jack Antonoff-produced album as having a lighter mood and a sense of humor, we won’t make the mistake of thinking this album will be any less meticulous in its crafting or any less capable of allowing us to drift away and lose ourselves in the experience. –Matt Melis

Ariana Grande – thank u, next

Why We’re Excited: It’s been a tumultuous couple of years for Ariana Grande. On one hand, songs like “No Tears Left to Cry” and “God Is a Woman” have made her arguably the biggest pop star on the planet. At the same time, she’s witnessed a terrorist attack that murdered 23 and injured 500 more at her Manchester, England, concert in 2017; grieved following ex-boyfriend Mac Miller’s fatal overdose last May; and endured every kind of public scrutiny possible during her short time dating comedian Pete Davidson. It was all so much that Grande announced she’d be taking a break from music. However, that didn’t last long, as she soon returned to the studio and released the eponymous lead single from her upcoming album, thank u, next. Not only did Grande turn her painful experiences into her first No. 1 hit in America, but she also reminded us that art can help lead ourselves and others out of the darkest of places. –Matt Melis

Why We’re Excited: It’s been three long years since Rihanna released her double-platinum eighth album, Anti-, but she’s hardly been out of the spotlight. In fact, quite the opposite, having starred in a number of productions, including last year’s Ocean’s Eight and the final season of Bates Motel, and being named both Harvard’s “Humanitarian of the Year” and Barbados’ Ambassador at-Large. For her highly anticipated followup, Rihanna’s been rather mum, though she did confirm it’ll be a reggae album influenced by (and possibly involving) legendary dancehall producer Supa Dups, which jives with reports that over 500 records have been submitted by some of the biggest producers connected to the genre. Whats more, given her recent collaborations with Future, Pharrell, Calvin Harris, and Kendrick Lamar, the latter of which earned her another Grammy, her assists will likely be deep, with rumors hinting at a collaboration with Cardi B. Whatever the case,  as her go-to vocal producer Kuk Harrell says, it’s going to be “incredible.” —Michael Roffman

Why We’re Excited: 2019 is going to be a big year for Madonna, who tipped things off with an impromptu New Year’s Eve appearance at Stonewall Inn, the iconic LGBTQ venue in Greenwich Village, New York. As she teased on Instagram, “2019………..????. Im going make you my best friend, my mother, my father, my son, my daughter, my sister, my brother, my lover, my ride or die, my co-pilot, my confidante, my muse, my spirit animal, my teacher, my stage, my audience, my high priestess. ????. My Queen, My Warrior, My Word, My Prayer ???????? that I. Send out to the world!” While that doesn’t say anything about her hotly anticipated followup to 2015’s Rebel Heart, we do know the album is coming, and that it should even be mixed by now, at least if we’re to take this November tease to heart. As for the sound, the Queen of Pop previewed a new song titled “Beautiful Game” at last year’s Met Gala and has stated how the album’s been infused with “Portuguese fado music.” Perhaps we’re due for some light musical history before the big drop? –Michael Roffman

Why We’re Excited: It’s not that we’re not used to seeing Mark Ronson’s name. It’s just that we’re used to seeing it farther down in the fine print of the credits. So it raises our well-kempt eyebrows to find Ronson, who has written and produced more hits than Cardi B has shoes to throw, opting to step into the spotlight for a change. We only have a lead single and a dynamic Saturday Night Live performance to lean on, but if Ronson’s full-length sounds anywhere near as good as his “Nothing Breaks Like a Heart” pairing with singer-muse Miley Cyrus, our achy breaky hearts will be well on the mend come release time. –Matt Melis

Why We’re Excited: In the time following the release of her outstanding 2013 debut Night Time, My Time, Sky Ferreira has been working slavishly over its aptly titled followup, Masochism. Once again, she’s been collaborating with producer Ariel Rechtshaid, in addition to executive producers Mike Dean and Rahki, with the theme of the album exploring how she’s moved from believing “if it doesn’t hurt then it’s not real” to being more confident in her self-value. While she’s teased of releases in the past — and there are enough stops and starts to this thing to warrant an incredible oral history — it appears as if we’re finally going to see it in 2019. In November, she ostensibly confirmed the news on her own Instagram account, writing, “????????????????????this winter???????????????????????????? it is official (!).” Mind you, Spring begins on March 20th, so we’ll see. –Michael Roffman

Why We’re Excited: Ever wonder what people do in their spare time these days? Simple. They watch and stream Dua Lipa videos and songs — to the tune of billions. The numbers don’t lie. At only 23, the English singer-songwriter has already been a YouTube sensation, hosted her own festival overseas (Sunny Hill Festival), and collaborated with talents like Silk City, Miguel, and Calvin Harris on hit songs that have been streamed hundreds of millions of times. While it might seem like there’s nowhere to go but down from those dizzying heights as a twentysomething, we’re more curious to find out if Lipa can take her craft to the next level, which means more than pumping out must-dance bangers. It means banging out an irresistible full-length. If she can do that, the “New Rules” star will make all the rules going forward. –Matt Melis

Why We’re Excited: The last year has been absolutely bonkers for Grimes. Her relationship to billionaire Elon Musk made her a household name — and warranted some of the greatest headlines in a year of headlines — while she managed to stay just as busy creatively without actually releasing her followup to 2015’s Art Angels. From collaborations with Janelle (“Pynk”) and Mindless Self Indulgence’s Jimmy Urine (“The Medicine Does Not Control Me”) to songs for Netflix and Apple, Claire Boucher was unstoppable. She ended the year, however, with straight-up business, delivering her new single “We Appreciate Power”, and teasing what might even be the new album cover. Even so, the album remains elusive, and could really be anything based on prior knowledge. If you recall, back in June, she shared a number of demos, all steeped in electronica, and earlier that February, she teased two albums in a since-deleted tweet: “The second one will be extreme darkness and chaos, the first will be highly collaborative and most glorious light.” Seeing how she’s wont to scrap ideas at the 25th hour, Grimes’ next album will likely remain a surprise until it’s finally streaming. –Michael Roffman

Why We’re Excited: If you’re not counting mixtapes, Charli XCX hasn’t released an album since 2014’s Sucker. (If you do, she dropped her Pop 2 mixtape in 2017, so back off.) But hey, new year, new resolutions, and making a new album is at the top of her list, according to her first tweet of 2019. Right after that is to release it, which means, according to our powers of deduction, that we’ll likely be seeing said followup to Sucker sometime before the carolers come out again. Now, it’s easy to forget five years later, but Sucker was a major blockbuster for the singer, delivering singles like “Boom Clap” and “Break the Rules”, which certainly adds some weight to this next chapter. Given her string of hits from last year, specifically “No Angel”, “5 in the Morning”, and especially her Troye Sivan collaboration, “1999”, we think she’ll be just fine. Now, if only we could make our own resolutions count. –Michael Roffman