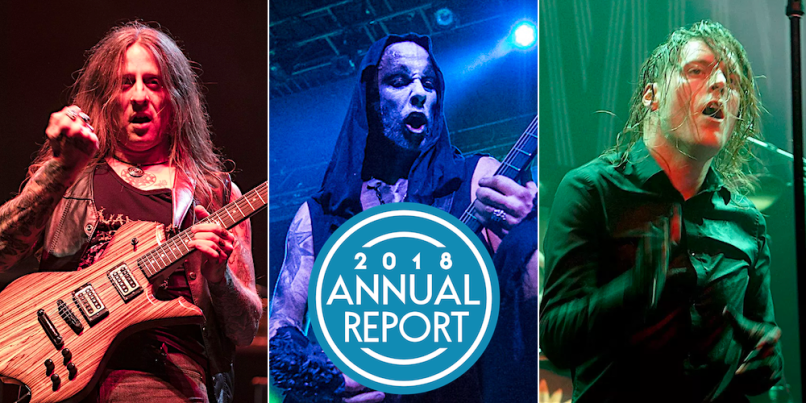 It was a fascinating year for metal and hard rock, with a number of underground and upstart acts releasing stellar albums in 2018, alongside strong discs from veteran bands like Judas Priest, A Perfect Circle, Clutch, Ministry and others.

Hardcore continued its renaissance, with young acts like Vein and Turnstile leading the charge. Meanwhile, extreme metal had another banner year, as bands like Behemoth, Tribulation, Portal, and others all churned out impressive albums. And doom metal ruled with exceptional efforts from YOB, Sleep, Khemmis, Windhand, and others.

And while next year will see the release of albums from big guns like Slipknot, Deftones, Rammstein, and possibly even Tool (fingers crossed), 2018 was a noteworthy year for heavy music, in that it was highlighted by a wide spectrum of subgenres, ranging from the avant-garde metal stylings of Zeal & Ardor to the radio-ready hard rock power of Halestorm.

With the launch of Consequence of Sound’s new destination Heavy Consequence earlier this year, it’s our pleasure to bring you our staff picks for the Top 25 Metal + Hard Rock Albums of 2018.

The Gist: After a six-year gap between albums, Pig Destroyer’s sixth disc, Head Cage, acts not just as a followup to their previous LP, Book Burner, but also to all the various experiments guitarist Scott Hull has undertaken between then and now, both in Pig Destroyer and his other grind band, Agoraphobic Nosebleed.

Why It Rules: Pig Destroyer continue their sonic expansion beyond the realms of grindcore, showing ample creativity and proficiency in more technical, progressive, groovy and punky realms. The players’ dabblings within other genres pay off here, giving a more well-rounded album than ever before with more song variance than they’ve had at any point prior in their career, all of which is delivered well. Vocalist J. R. Hayes continues to be the one of the best lyricists in grindcore, and the alchemical mixture of Blake Harrison’s noise and electronics with mastermind Scott Hull’s meaty guitar work continues to dazzle as a true force of extreme music. —Langdon Hickman

The Gist: Portal are one of Australia’s, and the world’s, most out-there death metal bands, and you can reach that conclusion from a Google Image search alone. They sound as ghoulish and inhuman as they look, taking equally from Morbid Angel and Ligeti. On their fifth album, ION, they strip away the bassy murk long integral to their sound and bring up the treble, giving them a black metal makeover while also adding clarity.

Why It Rules: Mystery’s been Portal’s appeal for most of their career, and making their attack more discernible doesn’t take away from that. It’s only made them more extreme. Now their terror is fully in front of you, with Horror Illogium’s guitar contorting into impossibly tortured shapes, skipping around in a bizarre cosmic game of hopscotch. Taken apart, it’s a mess of atonal noise; put together, it’s a pain and bliss hell-symphony for a hell-world. —Andy O’Connor

The Gist: Hard rockers Clutch have been going strong since the early ‘90s, and continue to deliver the goods on their 12th studio album. For Book of Bad Decisions, frontman Neil Fallon and company tapped producer Vance Powell, who has worked with Jack White and country star Chris Stapleton, giving the disc a sound and energy that matches the band’s live show.

Why It Rules: On Book of Bad Decisions, the Maryland rockers deliver a classic-sounding Clutch album that also feels fresh and awakened. Tracks maintain the sludgy melodies and groovy rhythms that longtime Clutch fans love but also branch out into new territory with everything from brass-heavy instrumentals on “In Walks Barbarella” to a touch of twang on “Vision Quest”. —Anne Erickson

The Gist: After nearly nonstop touring as the drummer for Dallas thrash insurgents Power Trip, Austin metalpunk maestro Chris Ulsh returns to his main project, Mammoth Grinder, his take on Swedish death metal via pummeling hardcore. This is also the first disc with their new lineup, with Ulsh switching over from guitar to bass and recruiting Iron Reagan’s Mark Bronzino on guitar and Ryan Parrish on drums.

Why It Rules: Anything with Ulsh’s touch is guaranteed to be a front-to-back banger. Even with five years between albums, a grueling schedule with Power Trip, and two-thirds of the band based out of Richmond, Virginia, Mammoth Grinder still sound like Mammoth Grinder. They can justify calling one of the songs “Superior Firepower,” as influenced by primitive Chicago death metal of Master as it is the Texas heat Ulsh emerged from. —Andy O’Connor

The Gist: The first release since the second time Ministry leader Al Jourgensen swore he was pulling the plug on the band, AmeriKKKant unfolds as a continuous sound collage assembled out of the nonstop bombardment that’s become a daily fact of life for anyone with access to media. Jourgensen was galvanized by the seismic shocks caused by the election of Donald Trump, whose voice is the first thing one hears on AmeriKKKant in the form of a warped soundbite.

Why It Rules: Why turn to this album when you can saturate your brain with the same unpleasant subjects virtually anywhere you turn? Because Jourgensen has a way of making them fun somehow. In anyone else’s hands, the miasma of chilling headlines the Ministry mastermind draws from would make for an oppressive, despair-inducing mood. Instead, you can glean some relief as Uncle Al leaps into the maelstrom like a park ranger sky-diving into a forest fire. Boy, do we ever need someone like him right now. —Saby Reyes-Kulkarni