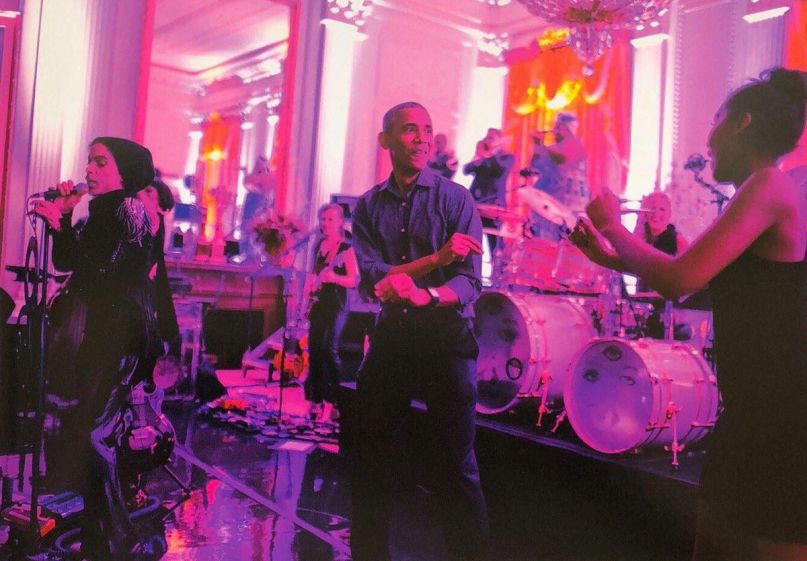 Prince at the White House, photo via @PascalBesselink // Twitter

Michelle Obama is a guest on the latest episode of Questlove’s Pandora podcast, Supreme. Their conversation focused predominately on music, including the records Obama listened to during her formative years (Stevie Wonder’s Talking Book) and her first concert (Stevie Wonder in Philadelphia circa 1983). She also recounted some of the more memorable musical moments from her time at the White House, including the private concert Prince put on in 2015.

As it turns out, booking Prince wasn’t the easiest of tasks. “We went back and forth trying to get Prince, because most of our personal parties revolved around birthdays — and Prince didn’t celebrate birthdays,” Obama said of the musician, who was a practicing Jehovah’s Witness. “‘He was like, I can’t come but I want to come.’ We had to figure out how to create something that wasn’t a birthday.”

When Prince finally did make his way to the White House, he kept the audience on its heels. “For the first 15 minutes, he just let his band riff. They were just jamming before he even showed up,” Obama remembered.

Obama also revealed that Bruce Springsteen first tested the show that become his Broadway residency at the White House. “He wanted to do something special for the staff and he put together what became the Broadway show,” Obama explained.

Explaining her decision to host so many concerts at the White House, Obama said, “One of the things I wanted to make sure of is that we got all the greats to perform, because I didn’t know if anyone was ever going to ask them to perform at the White House [again].”

Elsewhere in the interview, Obama discussed her current musical consumption and how she relies on her daughters to keep her informed. “I love to let them teach me about what they love… Sasha is my more musical child. She has her room set, candles lit, colored light bulbs, with certain sounds. It depends on what her mood is. She could be playing classical music — or jamming to SZA.”

“I’m not all down with it, but when I like a song I like it,” she concluded. But I will tell them if artists are crap.”

You can listen to the full episode here. Obama recently added a new leg of dates to her arena tour supporting her memoir, Becoming.