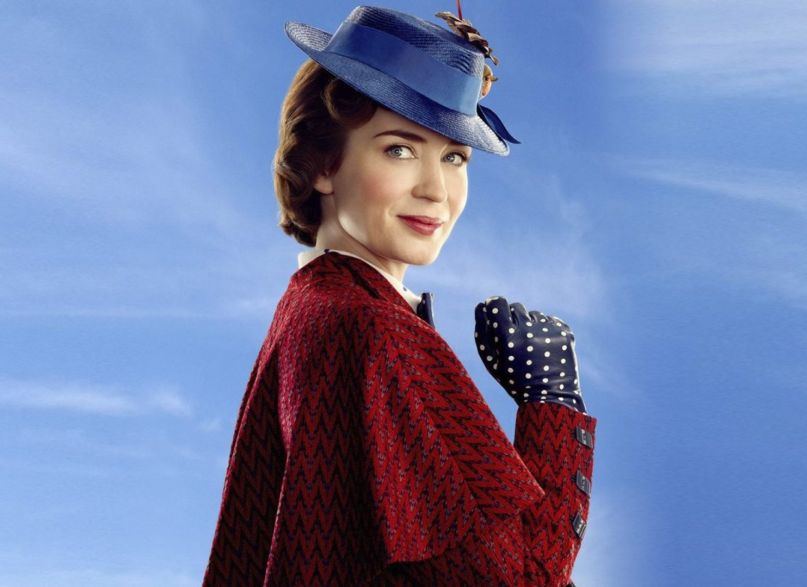 The Pitch: The Banks children are all grown up, for better and for worse. Michael (Ben Whishaw), who has children of his own now, grieves for his wife behind closed doors on Cherry Tree Lane. Jane (Emily Mortimer) has followed in her mother’s political footsteps, but has given up on love and the dream of having it all. [Ed. note: Sigh.] The younger Bankses (there are three of them, the youngest basically a walking Hummel figurine) have had to grow up quite quickly, doing the shopping and keeping the household running, but they’ve mostly forgotten to be kids at all. Then the big bad bank (headed by Colin Firth, that louse) swoops in to take 10 Cherry Tree Lane. Enter Mary Poppins (Emily Blunt), floating on an umbrella, here to set things right with the Banks family, aided by a charming lamplighter (Lin-Manuel Miranda).

Em’ly makes Returns feel right
When this film feels kind of ordinary
Em’ly makes it all so bright
Her Mary’s tongue is sharp and oft deceptive
But warmth still percolates throughout the tale
When Emily’s on screen
It feels so keen
She captivates in every goddamned scene
Oh it’s a jolly holiday with Em’ly!
No wonder that it’s Em’ly with the buzz!

Practically similar in every way: As the above section might suggest, this writer has a deep affinity for the Julie Andrews-starring Mary Poppins, one of the best children’s films of all time. It’s obvious that director Rob Marshall and screenwriter David Magee (working from a story by himself, Marshall, and choreographer/producer John DeLuca) share that affinity. That’s both a positive and a negative. On the one hand, Returns exists in the same colorful but gray, wild but civilized, anything-can-happen-but-please-sit-up-straight world as its predecessor, sometimes capturing but oftener echoing nearly all of what made the original so special. (A major exception: Mary and the Bert the Chimney Sweep stand-in, Jack the Lamplighter, never once feel as though they may actually just be trickster gods disguised as humans, nor does it ever seem likely that they fuck. Bert and Mary totally fuck. Moving on.)

But on the other, as pleasant as it is, it’s difficult to escape the feeling that Returns was written in the same way that Can You Ever Forgive Me? protagonist Lee Israel forged celebrity signatures: by holding the original up to the light and tracing it. That’s not to say that this is a remake, rather than a sequel, but that anyone with even a passing familiarity with the original will recognize each beat as it approaches. That’s especially true of Marc Shaiman’s (undeniably infectious) songs. Here’s the tender bedtime ballad (“Stay Awake” vs. “The Place Where Lost Things Go”). Here’s the adventure in a part of London known only to Mary’s handsome, impish, working-class sidekick (“Step In Time” vs. “Trip a Little Light Fantastic”). Here’s where they go inside a piece of artwork (“Jolly Holiday”, “The Royal Doulton Music Hall”) and then take in a public event in which Mary is prompted to participate (“Supercalifragilisticexpialidocious”, “The Cover is Not the Book”). The list goes on. The same is true of the beats of the story, up to and including a father’s anger at a child running through a bank in a manner that jeopardizes his job, even though the child was definitely not at fault. You get the idea. It all works, more or less, although some of the more transparent moments can be temporarily off-putting.

It’s a shame, because when Returns puts down the carbon copies, things tend to spark. A voyage inside a bathtub thrills when it shakes off its “Spoonful of Sugar” roots. That trip inside Bert’s painting — er, sorry, a painted bowl — gets particularly interesting when it begins to reflect the terrifying turmoil of the children’s outside lives. Michael’s grief proves more compelling than Mr. Banks’ disconnection and reserve. It’s good stuff. So is most of what exists in the Mary Poppins Mad Libs approach to the story, but it’s hard not to regret what might have been had the creators of this film listened closer to their titular character and embraced the power of imagination.

Supercalifragilisticexproaliduction design, so-so direction: So there are quibbles, who cares, this thing is gorgeous.

Sorry, should there be more to that? Fine. Mary Poppins Returns is one of the year’s most thoughtfully designed films. In a time when no shortage of movies try their utmost to feel classic or old-fashioned, Returns comes close to achieving what others attempt by leaning hard into texture, warmth, sets that feel too perfect to be real, and colors so vivid that they look as though the preface “techni-” ought to be applied. Of these elements, the one most deserving of close inspection and fawning praise is Sandy Powell’s almost comically rich costume design, in which even the buttons are worth a second glance. That’s true of all her designs, but most specifically those created for Blunt, which use color, shape, and movement to echo the contradictions present in the straight-laced nanny who breaks every rule of physics she encounters.

If only that sense of passion, whimsy, and thoughtfulness were present in Marshall’s direction. It’s not bad, per se, but there’s little in the way of real urgency or stakes; where the screenplay’s debt to the first Poppins means that the tone of the first carries through to the second, Marshall’s straightforward approach renders it all a little flat. Compare this film to Paul King’s Paddington films, for example, and you’ll notice that King nimbly trots the audience in and out of the imaginations of his characters, using who they are to determine the visual style with which they’re approached. Marshall achieves this exactly twice: Once, in a scene in which Whishaw’s Michael uses a moment alone to grieve his wife in a way that feels specific to that man and that actor, and the other, in a tiny smile from Emily Blunt that transforms the camera from impartial observer to trusted co-conspirator. Other than that, he’s here to flatly capture the wonder and make sure it’s all within Disney code. Mary Poppins is a little bit sexy, sometimes even dangerous, with a throughline of melancholy that keeps it all from becoming too sweet. Returns rarely reaches such heights.

That said, Marshall is particularly well-served by Blunt and Miranda, who seem to be having such a good time together — both as characters, and as two movie starts making a sequel to a freaking classic in really cool getups — that even when floating through the sky on the tail of a balloon looks kind of dull, their charms are nearly impossible to resist.

The Verdict: Mary Poppins Returns goes straight for the knees with a bat made of pure, undiluted, unrepentant nostalgia. It wants your money, it wants your tears and your smiles, it wants to place your kids in thrall to the chirruping dolphins and funny penguins, the parkour and the pretty clothes. It doesn’t even attempt to do something new, and save for a few good (and one great) performances, its aims are equal parts reverent and mercenary.

I also loved it. Make of that what you will.

Where’s It Playing?: Mary Poppins Returns will trip a little light fantastic into wider-than-wide release just in time for the holidays, on December 19th.