Film Review: Netflix Makes You Choose Your Own Adventure in Black Mirror: Bandersnatch 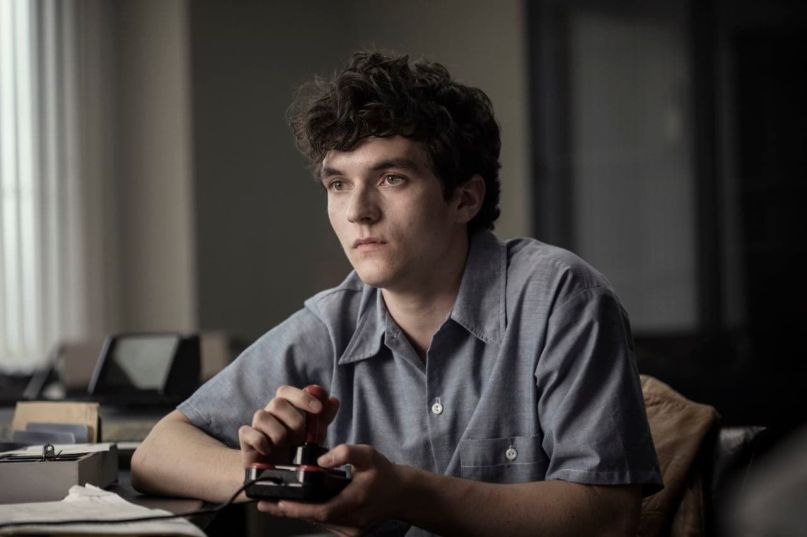 The Pitch: In this special choose-your-own-adventure Black Mirror set in 1984, young programmer Stefan (Fionn Whitehead) struggles to design an adventure game patterned after an ambitious sci-fi book called Bandersnatch, written by a controversial writer who met a grisly fate. However, as Stefan’s choices (and that of the viewer/player) grow ever more complicated and dangerous, his understanding of the world becomes increasingly unhinged. And that’s all that can really be said without giving away the game.

Would You Like to Play a Game?: Charlie Brooker’s anthology series has always explored the deep, cynical heart at the center of our technological world – including the ways in which we monetize and gamify our most animalistic impulses to own, possess, and control. Whether it’s the cutthroat social media rankings of “Nosedive” or the toxic fandom of “USS Callister”, Black Mirror has cornered the market on all-too-bleak visions of what demons the digital world might unleash within us. Along comes Bandersnatch, the first adult-oriented rollout of Netflix’s furtive dip into the world of interactive programming, and Brooker et al. have mined this new format for all the metatextual gold it contains.

If you remember the old interactive movies and FMV games of the ‘90s, the workings of Bandersnatch will be pretty familiar to you. Occasionally, Stefan will be faced with two choices, represented by a dialogue tree that pops up on the bottom of the screen; pick one, and Stefan will follow suit. The choices seem arbitrary at first – what cereal the main character eats, what cassette tape he listens to on his way to work – but soon give way to more substantial, controversial choices, several of which have life-or-death stakes.

Independent of how the format plays out in the story, it’s a fascinating new way to experience streaming media, if only by dint of its demands on your attention span. Bandersnatch is active media, not passive; you can’t put it on in the background while you fold laundry like most other Black Mirror episodes. In fact, you can’t stream it through most TVs or Chromecasts; you’re glued to your phone, tablet, or computer screen. In a number of ways, Bandersnatch forces you to engage, pay attention to details, avoid distractions – the kind of thing Black Mirror has been warning us to do with our technological world since its inception. As a microcosm for the show’s ethos, the interactive nature of Bandersnatch is quite engrossing.

Are You Still There?: Of course, Brooker (who wrote this episode) is never one to shy away from the metatextual, and Bandersnatch is the most brazen wink at the viewer that Black Mirror has attempted to date. As the film/game proceeds, and you try path after path to get to any of Bandersnatch’s five endings through what are rumored to be thousands of different pathways, Stefan’s understanding of the reality he’s in grows more and more. Think of it like Tom Cruise in Edge of Tomorrow – endlessly trying the same path over and over again to reach the right outcome, recognizing the Sisyphean journey he’s being taken on. The longer you move through Bandersnatch, the more Stefan might realize he’s being controlled, and by whom. He may even try to resist your commands, or obey them in a zombie-like fashion, with little say in the matter. In addition to the trial and error, you’ll have a little help in the form of Will Poulter’s spacey game designer Colin, who may know a little bit more about the mechanics of the world Stefan lives in than he first lets on.

It’s here that Brooker once again prods the lizard brains of his viewers, offering them the chance to troll Stefan at every turn, forcing him at vital points to make more and more extreme choices until he dies, or ends up in prison, or whatever else have you. Black Mirror makes its audience complicit in the dirty deeds onscreen all the time, but never this directly: one frequently finds themselves hovering over a particularly grisly option, knowing how Stefan will react, but irrepressibly tempted to see what will happen.

In this way, this special Black Mirror movie becomes a surprising reflection on the limited choices we seem to have in our lives, and the guilt we feel for not taking the road less traveled. As with some of Black Mirror’s best episodes, the technology isn’t an obstacle, but the vehicle by which broader questions about humanity’s relationship to technology are raised. For instance, our ability to empathize with the characters we see in media is tested in ways both large and small – whether you decide to make Stefan yell at his dad, or engage in a bloody, over-the-top brawl with his therapist (Alice Lowe). The game-ier Stefan’s story becomes, and the more he becomes aware of it, the deeper Black Mirror’s rabbit hole goes.

The Verdict: While its interactive nature is more of a curio than anything else, Bandersnatch remains an intriguing experiment for a show in which our relationship with technology is baked into the premise. Bandersnatch is kind of like Memento – if you were to string it all together into one single, chronological narrative, the end result wouldn’t be nearly as interesting. However, as with a lot of media, the style is the substance: an interactive movie as a means to interrogate the way the viewer engages with the characters and story they see onscreen. When we move Pac-Man, does he think he’s moving himself? When he dies, does he mind? When he respawns, is he the same guy?

What happens when Pac-Man finally looks back and sees you controlling him?

When’s It Playing?: Bandersnatch is ready to branch off onto a million dialogue trees on Netflix now.