Festival of the Year: Austin City Limits Evolved into Something for Everyone 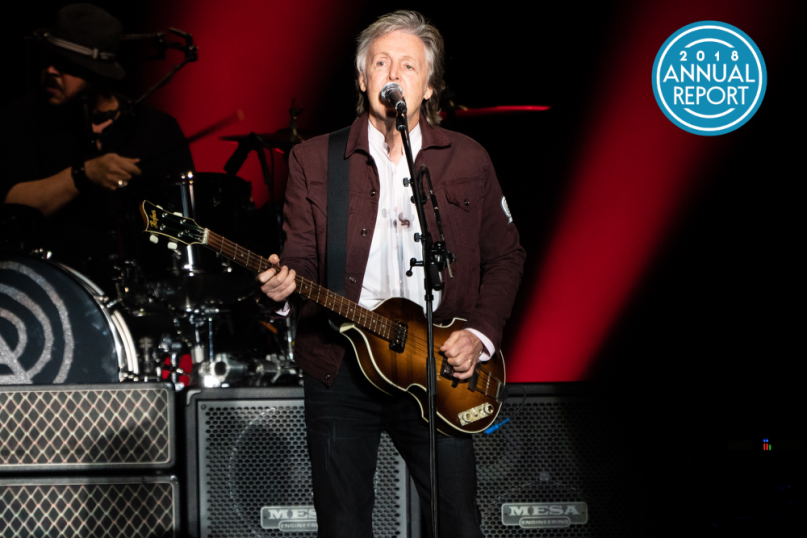 “Every year it’s a priority … to make sure there is a good representation and balance within the lineup.”

While C3 Presents promoter Amy Corbin, lead talent buyer for Austin City Limits Music Festival, may have expressed humility in our recent interview regarding the booking efforts behind the 17th annual edition of the Austin scene’s crown jewel, we at Consequence of Sound have nothing to lose by totally shedding our composure all over again when we think back to the staggering magnitude of ACL’s 2018 lineup, topped both weekends by none other than Sir Paul McCartney. That double dip was quite a historic coup for the festival.

“We have had Paul McCartney on our wish list for many years, and the stars finally aligned,” Corbin said. “When he confirmed both weekends, it gave us a road map for booking the rest of the lineup.”

Given that ticket prices for a regular McCartney tour stop would typically exceed the fest’s three-day cost, the 130-plus-band experience was a steal in which every other act could be considered a bonus. Depending on who you ask, the same might be said of Metallica (“certainly the hardest rock band we have had headline the festival,” Corbin confirmed). Their inclusion was also an unquestionably historic exploit as the thrash titans had also never played back-to-back fest weekends.

To boot, Corbin’s team scored a diverse slate of additional superstar headliners, each of them touting one of the year’s top-rated tours (Arctic Monkeys, Odesza, and Childish Gambino, replaced last-minute by Travis Scott after suffering a foot injury the weekend prior in Dallas), plus top-tier acts permeating virtually every hour of the day (David Byrne, Janelle Monáe, St. Vincent, Khalid, Justice, The National, and CHVRCHES, to name a few), rounding out a lineup more monumental than anything we’d seen from ACL in years.

Even though some have argued that 2017’s installment felt a bit like an identity crisis with talented, but overbooked headliners (The Killers, Red Hot Chili Peppers, and Chance the Rapper) and several repeats (the xx, Ryan Adams, Solange, Spoon), calling 2018 a “comeback” would ring fallacious. It would imply that ACL’s popularity has waned, but even in weaker years, passes generally sold out — maybe not during the blind pre-sales as they once did, but almost always eventually — and by adapting to trends (such as including heavy-hitter hip-hop headliners, which initiated with Kanye West’s 2011 dazzler), the festival has maintained its world-class reputation.

While Corbin asserted that rosters over the years “always stick to the roots of the festival and the great city of Austin,” many purists would argue that relenting to popular hip-hop — and increasingly in recent times, big-name EDM  — marks an extreme shift away from ACL’s country, folk, and rock legacy. Before McCartney, the latter category’s last real rep was Neil Young & Crazy Horse in 2012, so if anything, this year’s inclusion of far more rock, soul, folk, and country (2018’s tiny fonts in particular were loaded with these) signaled a return to ACL’s traditional form, surely a significant point of satisfaction for the loyal old-schoolers and scores of families that pour in from the surrounding neighborhoods within walking distance.

McCartney was undoubtedly a draw for those types, many of whom were likely in attendance for some of ACL’s legendary legacy sets (Tom Petty in 2006, Bob Dylan in 2007, and Stevie Wonder in 2011). But beyond nurturing nostalgia and the aforementioned unparalleled price point, McCartney’s presence was also meaningful because it exposed tens of thousands of younger festivalgoers to one of the most influential songwriter-performers in history. Even at age 76, playing much the same set list (save a for a few occasional swap-outs/updates) and telling the same stories most nights, McCartney once again proved he’s a master of making his audience members feel like their show marks the first and only time these moments will occur.

“There are special moments every year that you can’t replicate,” Corbin explained, “and that moment happened this year while everyone in Zilker Park sang along to McCartney performing ‘Hey Jude’, and he smiled out to the crowd and said, ‘It sounds like the whole world’s singing.’ It was incredibly moving and a once-in-a-lifetime moment that thousands of people shared together. That’s what Austin City Limits Music Festival is all about.”

If that wasn’t the moment for everyone, other equally historical circumstances throughout the fest’s two weekends culminated in other instances of profound catharsis. Austin’s largely progressive bubble culture (we call it “a blue dot in a sea of red” for good reasons) proliferates a penchant for channeling calls for political and social justice, and that sense of overwhelming empathy extends throughout ACL’s populace.

For instance, last year’s festival was unexpectedly bolstered by a unified outpouring of love and the concurrent spirit of defiant optimism following the double-whammy of Tom Petty’s death and the terrifying and sickening mass-shooting during Las Vegas’s Route 91 Harvest country music fest, which occurred only hours apart. Tributes and messages encouraging attendees to embrace their shared humanity via live music abounded, perhaps the most notable and direct among them from rapper Ice Cube during his Weekend One performance: “I’m so happy to be here showing the world that we aren’t scared of that bullshit in Las Vegas,” he said. “I’m glad y’all came … because it’s nothing but love here.”

This year, such sentiments once again boiled down to uncanny timing. Judge Brett Kavanaugh’s confirmation to the Supreme Court during Weekend Two, in the midst of one of the most female-loaded rosters in recent ACL history, incited the boiling over: Brandi Carlile  and St. Vincent both made sharp-witted, scathing (if subtle, in the latter’s case) statements on stage, and Chvrches’ Lauren Mayberry coined the “Moment of Fuck” (where everyone screams the obscenity in lieu of a moment of silence), which frankly ought to become a national tradition. Just ask anybody who was there how good it felt to grieve together at full, angry-as-hell volume.

Even before any of that came to light, Consequence of Sound‘s Artist of the Year Janelle Monáe had already begun leading the charge toward justice during her Weekend One set. At every turn, she pulled double duty by honoring Prince (who contributed music and production to her latest full-length, Dirty Computer) while simultaneously gearing her production/message toward championing the marginalized, from the LGBTQ community to the general weird-is-cool-and-normal attitude, which, perhaps not coincidentally, Austin is known for.

The Electric Lady drew a crowd just as massive, far more diverse, and twice as spirited (not to mention bowled over with emotion) as several larger billings throughout the weekend. She had a shorter slot, but played longer and exhibited more merit than most to take up the reins as a modern hero of sonically bold, future-fusion music. She gave Sunday the oomph it needed to finalize the notion that this ACL fest would be one for the books.

A feeling of defiant celebration also carried over into Weekend Two’s many rock and roll moments, ready-made by this year’s return-to-roots roster.

“This is our time, Mike,” I witnessed Brandi Carlile say to Pearl Jam’s Mike McCready (her surprise special guest) backstage just before her dissent-laden set. The renowned axeman joined toward the show’s end to help cover “Babe I’m Gonna Leave You” (itself a symbol of protest via Joan Baez in an uncannily parallel era of sociopolitical unrest), and his solo punctuation of “The Star-Spangled Banner” (in true Jimi Hendrix/Woodstock ‘69 style) to cap it off said everything without a single word uttered. McCready’s presence, though brief (and extended slightly through a guest spot with Seattle protégé band Thunderpussy the following afternoon), illustrated yet another nod to ACL’s rock and roll legacy.

All the while, ACL forged ahead this year by spotlighting the rising stars of pop, indie, and hip-hop (Khalid, BROCKHAMPTON, Blood Orange, Tinashe, Bishop Briggs, Japanese Breakfast, Amen Dunes … the list runs deep into the tiny fonts), essentially forming a fest that was as much concerned with building a bridge that links to the future as it was with merely tapping back into its roots. With all these elements in place, the 2018 Austin City Limits Music festival reclaimed high-ranking relevancy on the international stage with the feel of an invested music community reserved for good people sharing wholesome humanity through the collective experience of great live music.

It would have seemed weird if it wasn’t so wonderful.