"You need someone who can speak some of the same language [as Trump] ... and the Democrats don't have an obvious, effective presidential candidate" 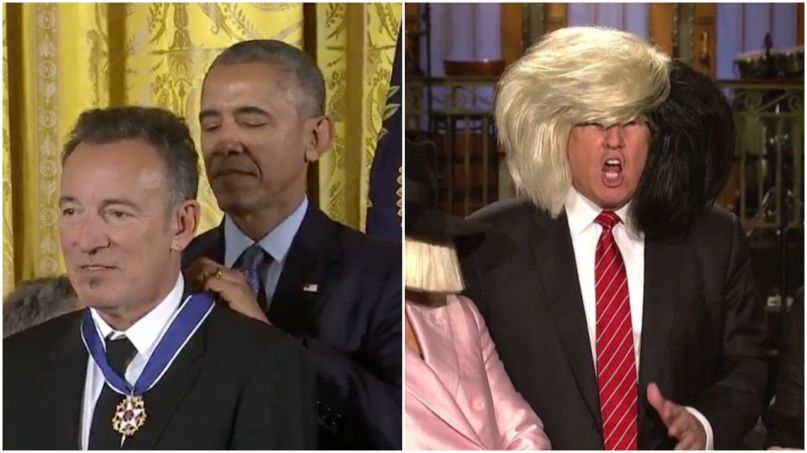 Bruce Springsteen’s had to reckon with the looming specter of Donald Trump more than most artists, what with Springsteen’s music having long been favored by the kinds of blue-collar types that voted for the ghoul. That said, he’s never backed down from his own liberal beliefs, and he stands by them even today. In a recent interview with Esquire, he called Trump “deeply damaged,” “pitiful,” and “a dangerous man.”

That said, The Boss doesn’t he’ll be leaving office any time soon.

“I don’t see anyone out there at the moment … the man who can beat Trump, or the woman who can beat Trump,” Springsteen recently told The Times when speaking about the potential 2020 Democratic field. “You need someone who can speak some of the same language [as Trump] … and the Democrats don’t have an obvious, effective presidential candidate.”

He touches on similar ideas in the Esquire interview. “I think that a lot of what’s going on has been a large group of people frightened by the changing face of the nation. There seems to be an awful lot of fear. The founding fathers were pretty good at confronting their fears and the fears of the country. And it’s the old cliché where geniuses built the system so an idiot could run it. We are completely testing that theory at this very moment,” he said. “I do believe we’ll survive Trump. But I don’t know if I see a unifying figure on the horizon. That worries me. Because the partisanship and the country being split down the middle is something that’s gravely dangerous.”

As Chris Cillizza puts it over at CNN, the ideal 2020 candidate will be one who can speak to the same audience that Trump can. He mentions former vice president Joe Biden and Ohio senator Sherrod Brown as examples of those who potentially could, but Springsteen has a point about speaking “the same language” as Trump, whose aggressive rhetoric has caused a terrifying shift in the way we discuss politics in the modern age. Whether we find that candidate or not, Springsteen, who has a direct line to many of those voters, will keep doing his part.

In more uplifting news, Springsteen recently confirmed plans to release new music and embark on a tour in 2019.