Hour-long program featured "God is a Woman", "Love Me Harder", and her Thundercat cover 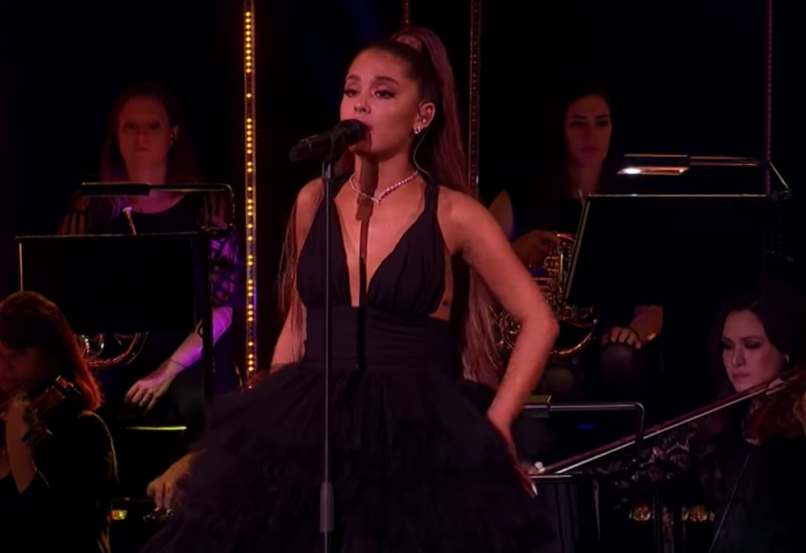 Ariana Grande: Live at the BBC

Ariana Grande is the focus of a new TV special for the BBC. For the hour-long program — aptly titled Ariana Grande at the BBC — the pop singer performed a 13-song set as well as sat down for an interview with host Davina McCall.

As previewed earlier this week, Grande delivered hit single “God is a Woman”, alongside other Sweetener selections like “No Tears Left to Cry” and “Pete Davidson”, her album tribute to her ex-fiancé and Saturday Night Live comedian. The proud owner of pet pig Piggy Smalls also performed “Love Me Harder”, taken from 2014’s My Everything, and “Dangerous Woman”, from the 2016 album of the same name.

Additionally, the setlist included her cover of Thundercat’s “Them Changes”, a rendition Grande had previously debuted on BBC’s Live Lounge in September. The 25-year-old star was accompanied by an all-female orchestra and choir section — a nod, of course, to the powerful celebration of womanhood found on “God is a Woman”.

During the interview portion, Grande talked about her One Love Manchester benefit concert, which raised $13 million for the victims of the tragic May 2017 Manchester Arena attack. She also discussed her struggles with anxiety and the importance of mental health.

“I almost feel guilty that I have it [anxiety] because it’s just in your head and it’s just so crazy how powerful it is,” said Grande. “You have ups and downs and sometimes you’ll go weeks at a time where you will be crushing it and there will be no anxiety… and then something will happen that can trigger it and then you have a couple of down days.”

“Talk to your loved ones, reach out to people, especially your friends online,” she added. “Reach out to each other.”

According to People, the BBC special was shot in London on September 7th, the same day collaborator and former boyfriend Mac Miller passed away. However, she reportedly hadn’t heard the news until after filming wrapped up.