The Mötley Crüe stickman advises the rapper to "lawyer up" 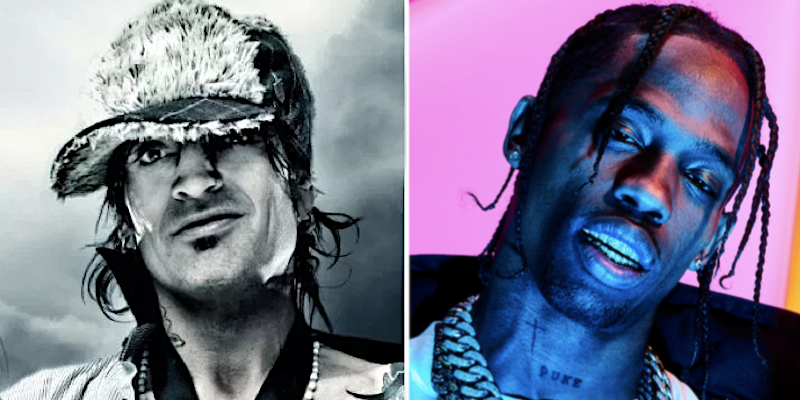 Mötley Crüe drummer Tommy Lee has long been known for designing and performing on some wild contraptions onstage, including a 360-degree drum-coaster that he broke out on the Crüe’s tour back in 2011. Now, the veteran stickman is accusing rapper Travis Scott of stealing that very same mechanism.

On his current “Astroworld Tour”, Scott straps himself into a chair and rides around the circular roller coaster as he raps. The structure looks exactly like Lee’s 360-degree drum-coaster, and could even be the very same apparatus.

Additionally, Lee is accusing Scott and his team of ripping off his “Cruecifly” design, a roller-coaster type contraption that allowed Lee to perform over the audience during Mötley Crüe’s “Final Tour”, which ran from mid 2014 through the end of 2015.

“Just found out this f**king idiot @travisscott or someone on his team ripped off the 360 AND The Cruecifly! WTF!! Get an original idea bro …,” Lee wrote on Instagram, while providing video proof. He later added, “I get copying is a form of flattery, but this is just straight ripping off my shit. What do you guys think???”

Update: In a statement, a legal representative for Scott said: “Tommy didn’t invent the concept of a roller coaster on stage and there’s no legal basis for his accusatory outburst. The actual creator and owner of the system has granted Travis all rights to use that equipment to complement his original stage design.”

Just found out this fucking idiot @travisscott or someone on his team ripped off the 360 AND The Crüecifly! WTF!! Get an original idea bro…(swipe to see who did this shit first) BRB there’s more …

ANNNNND not one rip off but TWO. DOPE. I get copying is a form of flattery, but this is just straight ripping off my shit. What do you guys think??? #crüecifly

The veteran rock drummer then advised Scott to “lawyer up” in a tweet:

Lee himself was once sued over the 360-degree drum design by a man named Howard Scott King, who claimed he helped come up with the idea years earlier, but the drummer emerged victorious in the case.