Saturday Night Live Highlights: Steve Carell Gets Back to Making Us Laugh

LaVarr Ball, Ella Mai, and a space cat without a face rounded out the evening 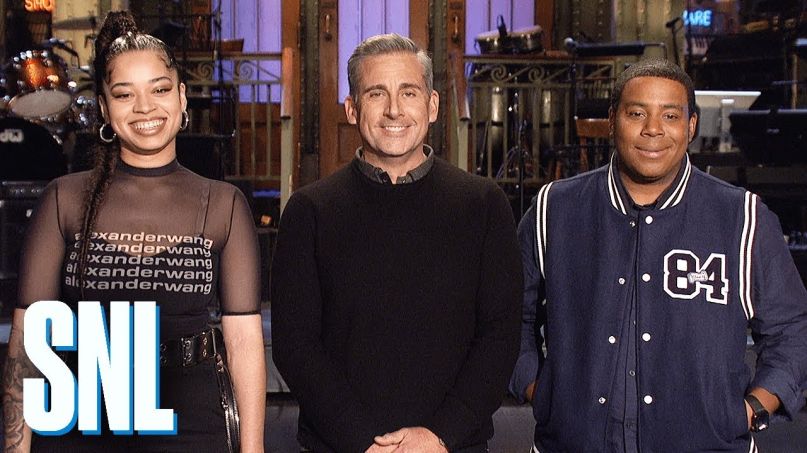 Pop quiz: When was the last time Steve Carell was in an all-out live-action comedy? (So no Despicable Me movies.) I guessed The Incredible Burt Wonderstone (not that I saw it); turns out it was Alexander and the Terrible, Horrible, No Good, Very Bad Day. (Okay, I didn’t see that either.) Post-Office, Carell has carved out a career in more serious fare, like the just-released Beautiful Boy. While he’s a talented and versatile actor, the prospect of seeing him cut loose hosting SNL (only his third stint, surprisingly) is certainly exciting.

The high point of the night arguably came in the monologue, which featured a mini-Office reunion with Ellie Kemper, Ed Helms, and Jenna Fischer, as well as Carell’s wife, Nancy Walls, and their two children. His money-hungry fellow Dunder Mifflin alumni urge him to agree to a reboot, with Helms offering the choice quote: “You wouldn’t have to do all those sad movies anymore.” The band playing the classic Office theme into the commercial break was the icing on the nostalgic cake, but there were a few other decent moments along the way. Here are last night’s highlights. (Honorable mention: the bulldog sweater Carell wore in the goodbye).

Houston, we have some problems

On a space station with Carell answering student questions live, it’s clear that things are going to go bad for him and his fellow astronauts (Leslie Jones and Mikey Day). The animals on board end up frozen and faceless, much to Carell’s horror. It’s not a terribly creative sketch, but it survives on the back of some amusing visual gags, like a frozen (albeit stuffed) monkey losing its arm and Carell’s unique ability to be absolutely aghast and unable to hold it in. “THERE’S A CAT WITH NO FACE FLOATING AROUND” is a sentiment that only a pro like Carell could pull off.

Fresh off the release of her self-titled debut album, British R&B singer-songwriter Ella Mai put in a solid performance, singing her hit “Boo’d Up” (a song whose lyric “Can’t control my anxiety” didn’t turn out to be prophetic as she appeared excited but comfortable onstage) as well as “Trip”, which was performed in front of a cage set with a fog machine adding some more atmosphere. A fuller band with maybe a few more backup singers might’ve helped, but Mai’s first stint on SNL will hopefully allow her to climb further up the ladder of music stardom.

It wasn’t a particularly great Weekend Update, which featured Virginia Congressional-elect and Bigfoot erotica author Denver Riggleman (Mikey Day) and showed that can’t-miss comedic potential can miss if you’re trying too hard. But it ended strong thanks to the return of Kenan Thompson’s outsized LaVar Ball impression. Ball (Thompson) proposes that he become the new Lakers coach and bring all his sons (including the little-known LaMorpheus, just rescued from The Matrix) onto the starting lineup with some guy named LeBron James. Along the way, he describes Lithuania as having “the briniest cabbage this side of Bucharest” and introduces an athletic shoe that can allegedly track genealogy (sort of).