Adam Grossman, Big Papi, and anxiety over Tuesday's midterms rounded out the night 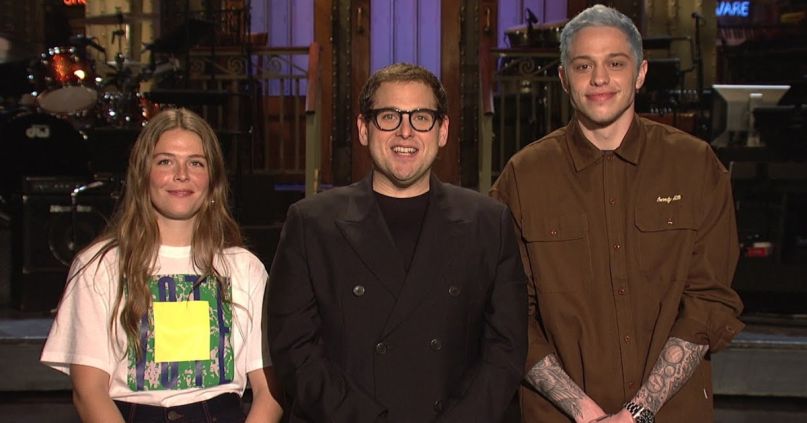 This week, another star joined the five-timer club over at Saturday Night Live, as Jonah Hill took on hosting duties for his latest jaunt in Studio 8H. While the promo ads gave us an awkwardly stone-faced Hill – a man deep in the throes of a career reinvention as a director of Serious Art – host Hill jumped right back into comedy mode without skipping a beat. Last night’s SNL wasn’t the most innovative hour of TV, but it continues the show’s upward trajectory after a bumpy start to its 44th season.

Along with Hill bringing back some of his favorite characters, the show touched on the weird, ever-increasing anxiety surrounding next week’s midterms (go vote, ya dinguses!) and tried desperately to overcome being upstaged by Ariana Grande intentionally releasing her new song a half hour before her ex’s show was to start. Woof. And let’s not forget Maggie Rogers’ spotty first song as musical guest, where the nervous songbird was hella flat for an entire verse before the backup singers wrenched her back on key. Luckily, her Madame Blanc from-Suspiria-cosplay helped her through her second set.

Still, Hill and co. seemed to have a pretty good time with a thoroughly milquetoast episode of sketch comedy punctuated by the frenzy of the Grande Twitterverse and pre-midterms mania. Check out some highlights from last night.

Five-time host Hill eased back into effortless sketch comedy in his fifth go-round, with an opening monologue that transitioned into a sketch in the “Five-Timers Lounge” — though, in a post-#MeToo world, the only candidates allowed in are Tina Fey, Drew Barrymore, and Candice Bergen (all of whom made charming cameos) since all the dudes are pervs now.

Hill didn’t get to do all that much to shine in most of the sketches, mostly playing bystanders and supporting players, but he did get the episode off to a great start with an uproarious return as six-year-old Jewish loudmouth Adam Grossman. With the same crass joie-de-vivre as a middle-aged borscht belt comedian, Hill’s wide-eyed Grossman never fails to make his co-stars break, including Leslie Jones as his not-Jamaican nanny. Even if he didn’t get to do all that much, the show sailed when he got to let loose.

Weekend Update was its usual self for the most part (including another appearance by Kenan Thompson as Big Papi, complete with his ever-lengthening list of absurd endorsements), but things came to a stop when Pete Davidson showed up for a segment describing skeevy politicians running in the midterms. (His impression of Rick Scott: “he looks as if someone tried to whittle Bruce Willis out of a penis.”) But the real surprise was when the giggly comedian addressed his recent breakup with Ariana Grande head-on, saying that the breakup was “no one else’s business, and sometimes things just don’t work out.” He complimented her and wished her all the best, making for a surprisingly sober admission from the kind of guy who looks, as he describes himself, “like a Dr. Seuss character who went to prison.”

SATURDAY NIGHT LIVE MAKES A SPLASH ON THE BLUE WAVE

In the wake of Alec Baldwin getting literally arrested for punching a guy in the face, SNL had to keep up its not-so-heavy lifting taking potshots at the Trump administration. Of course, this week isn’t like most weeks: it’s the midterms! That means the show took plenty of opportunities for some good, old-fashioned liberal navel-gazing, from a campaign video parody filled with nervous liberals shakily asserting their confidence that the #BlueWave is coming to a pitch-perfect parody of naïve white liberals #Resisting by putting on a clueless, oversimplified off-Broadway musical about the Trump Era. (“Border control, birth control, it’s all out of control!”) Sure, the evils of the current administration are still great fodder for comedy – a late-show commercial for HuckaPM, the pill Sarah Huckabee Sanders uses to sleep at night, lets Aidy Bryant show off some hilarious pratfalls – but there’s plenty to prod about well-meaning liberal naivete and nervousness.