Ranking: Every Slayer Album from Worst to Best 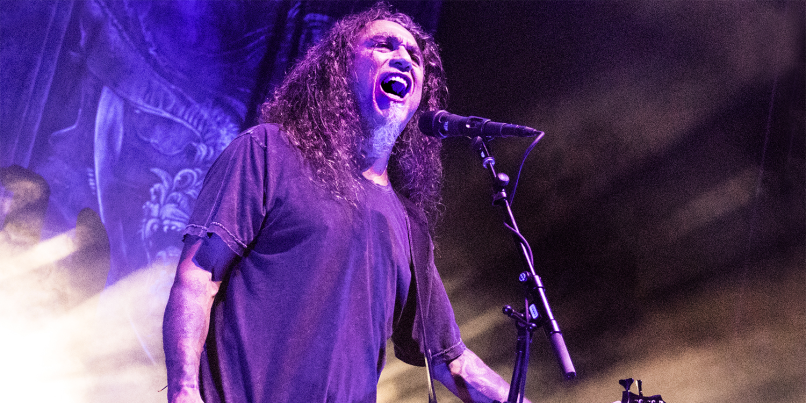 It seems impossible, but at the beginning of 2018, Slayer announced they would be embarking on their farewell tour. They had released what now appears to be their final studio album, Repentless, in 2015, after a tumultuous period that saw not only the second departure of their founding drummer, Dave Lombardo, but also the tragic passing of their founding guitarist and central songwriting figure, Jeff Hanneman.

It’s been almost 40 years since Slayer first emerged onto the scene, lasting a hell of a lot longer than any band of scraggly avant-garde punk and metal enthusiasts really could have expected. In that time, their sound, a mixture of the theatrical Satanic prog-flecked heavy metal of Mercyful Fate and Judas Priest, the stiff-armed thrash of Metallica, and a heavy dose of straight-up hardcore punk, managed to crest far beyond the shores of the underground, seeing them partnered with Rick Rubin as they set out to become one of the most legendary and influential metal bands of all time.

Like any band of consummate age and productivity, narratives have formed around Slayer’s albums, and especially in the light of the closure of the band’s studio work, it’s a fine time to reevaluate the material on its own merits. After all, we now apparently have the complete set and can view records not merely as better or worse than the holiest of thrash holies but also determine how each fits within the arc of the band’s career as a whole. Slayer demand this kind of respect from the world of metal; for decades of work, for near-endless influence on bands large and small, and for some truly exceptional heavy metal albums, including a couple that easily rank among the greatest of all time.

Slayer always were the heaviest of the Big 4 of thrash metal. So, with the ’90s in full swing and thrash all but entirely commercially dead, it’s not shocking that they would turn for a heavier sound compared to the hard rock Metallica and Megadeth were putting out at the time. Anthrax swung heavier, too; but where Anthrax seemed inspired by the post-thrash sonic invention of groove metal, nabbing some of Pantera’s tight rhythmic swagger and trading in an operatic vocalist for a gruff and more percussive one, Slayer turned to nu-metal. Nu-metal is going through a bit of a cultural and critical renaissance right now, and this isn’t meant to steal from that, but Slayer and nu-metal simply don’t mix well.

On tracks such as “Death’s Head” and “Stain of Mind”, it feels like Slayer lost technical acumen and replaced it with nothing at all, turning in poor pastiches of System of a Down and Limp Bizkit, respectively. It’s easy to understand, after over a decade and several legendary records, a desire to stretch out and experiment. It’s likewise easy to understand, after losing a figure as pivotal to the evolution of metal as drummer Dave Lombardo, the band would want to not just recover but mark a brand-new sonic era. It’s laudable that this, their third record with drummer Paul Bostaph, is also their third different-sounding record. The group has a running joke about them that, like Motorhead or AC/DC, they never change, but that hasn’t necessarily been the case.

And while there are some interesting experiments here that are a fascinating attempt by a foundational extreme metal band attempting to bridge the gap between their era and nu-metal and draw connections that sometimes get written off by critics and fans who imagine themselves above that more urban sub-genre, the vast swath of this record proves that their experiments, by and large, were not successful. A shame, too. When the better tracks off this record get going, you feel 15 again, leather jackets and weekends of shenanigans scored to thrash metal from a Walkman.

What now appears to be Slayer’s final album didn’t exactly do a great service to the band’s legacy. After their guitarist and founding member Jeff Hanneman died, there was a lot of concern about if and how the band would continue. Hanneman was one of the chief songwriters and creative directors of the group; there’d been albums where fellow guitarist Kerry King had written the majority of the tracks, but typically the process of deciding which songs made it on a record was a communal one, one where Hanneman’s ear served the group even when it wasn’t his tracks making the cut that time around. With Exodus guitarist Gary Holt aboard, even before Hanneman’s death, the band already had a worthy replacement in its lineup.

Likewise, this was their first album to feature a returning Paul Bostaph after Dave Lombardo was once more (and quite acrimoniously) driven from the band when he went public with pay issues. Apparently, the sourness could not be overcome. What is delivered is undoubtedly a Slayer record, one that feels as comfortable with their traditional punky and violent thrash as with the mid-paced stomping groove from their Bostaph years. The issue is that there’s not quite enough life to the album. This is Slayer with the lights turned out. Perhaps it was the mood surrounding the record, for the band and fans alike, that hampered the disc.

Some of these songs are pretty good, and this same record released by another group would be an interesting and satisfying one. But Slayer set the bar high for themselves, and missteps between this album and the one that preceded it seemed to totally suck the energy from the room. Still: no cringe-worthy experiments, and that counts for something.