The Flint, Michigan native delves into her identity as a Syrian, an American, a mother, and a chaplain on the five-track release 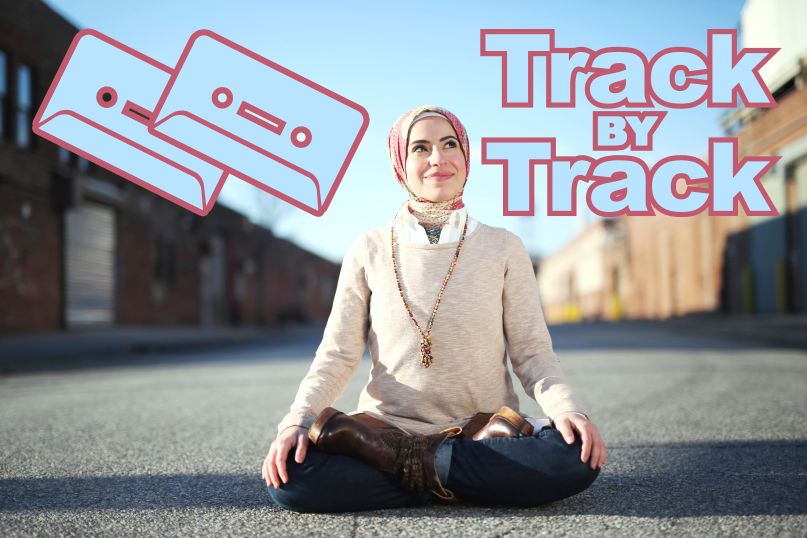 Track by Track is a recurring new music feature in which we ask artists to spill about the stories behind each song on their latest release.

In March of 2017, Syrian-American artist Mona Haydar shared a music video for “Hijabi” in which she, eight months pregnant at the time, rapped about the pride she takes in her hijab. The clip quickly went viral, and Billboard subsequently named the song one of 2017’s top protest songs, not to mention one of the top 25 feminist anthems of all time. Another single, “Dog”, followed, and now Haydar returns with a new, five-track EP, Barbarican.

“If they’re civilized, I’d rather stay a savage,” she proclaims at the top of exuberant opener “Barbarian”, a song that finds Haydar delivering lyrics as clever as they are cutting. She speaks openly about the rising tide of racism in America over the last several years, calling out white supremacy and colorism in between verses tackling everything from war and faith to beauty and pop culture. Haydar’s wide-ranging approach reflects her own identity; in addition to being a rapper, the Flint, Michigan native identifies as a “poet, activist, practitioner of Permaculture, meditator, composting devotee, mountain girl, solar power lover, and a tireless God-enthusiast.” She’s also got a masters in Christian Ethics to accompany her studies of Arabic and Islamic spirituality.

“My music is for people resisting racism. Speak truth to domination,” she told Elle last month. “My music is an introduction for people to see something new that redefines what a Muslim woman is. I am muslim, I am American, I am a Syrian, I am a rapper, I am a chaplain. Wholeness is a practice.”

Her music is also very, very fun. Haydar’s lyrics leap between the wry and emotional, the beats are layered and lively, and her delivery is animated, as if she’s hours-deep in a spirited, intimate conversation. “All I wanna do is have some fun by the beach, man,” she spits on “American”. “But here come ICE and that travel ban.” It’s funny, it’s real, and it’s urgent as hell.

Hear Barbarican in full below.

For more on the EP’s background, Haydar has taken us through each song on the release Track by Track.

“Barbarian”:
This song is about taking down Western standards of beauty and giving a big F U to white supremacy. We have no time to allow the powers of bunk systems to work out their own weird insecurities on us anymore. We as POC recognize our own beauty, power and ways of knowing as being the only standards we will hold ourselves up to. We are decolonizing our ways of being such that we return to the ways of our ancestors as we love ourselves precisely for who and what we are in the LIGHT of the ONENESS.

“Suicide Doors”:
I lost my best friend to suicide and realized that it doesn’t matter how nice a car is on the outside if it’s foul on the inside. Those tricked-out suicide doors don’t make that car cute if it’s not also cute on the inside. There’s too much stigma around talking about mental health issues in our communities as POC and I just wanted to be able to open up that conversation in a way that made it accessible. “She opened up the suicide doors, lookin’ for a way out.” We have to be good on the inside and on the outside simultaneously on this journey of life—we’ve got to have that balance.

“Lifted”:
Getting lifted for me is about the way I feel when I’m around people who make me feel seen and heard — people who love me as I am and are always helping me to grow into the most beautiful person I can possibly be. In a moment of reprieve from my postpartum depression, I wrote the hook to this song and came up with the melody — I could see the light at the end of the tunnel and knew that I just had to hold on and do my best to fight my way out of the fog of it all.

“American”:
“They don’t want to see me as American/ See me on your TV as a terrorist/ All I wanna do is have some fun by the beach, man/ But here come ICE and that travel ban.” White supremacy/nationalism comes for us, but we’re going to turn up and enjoy our lives in spite of that nastiness. In this song, we have no time for ugliness, we’re too busy basking in the glorious sunlight and getting a lovely tan as our skin turns even browner. We subvert and resist injustice simply by being JOYFULLY ourselves.

“Miss Me”:
This is the one where I really go for it. (Laughs) Or come for them. “Masters in Theology/ White Jesus isn’t saving me.” I have a masters in Christian Ethics so when so-called Christians in the White House want to talk to me about what the Bible says or what Jesus says or would do, I’m just totally not here for it because I can just get my own exegesis on and call in scholars from all over the world to discredit them. Not that it’s my job, I just happen to enjoy the quest for knowledge. I am here to attain a taste or gnosis of the Divine and no system or structure will keep me from that goal. “Allah all the time/ On your feet or on your side/ Ascended past material realm/ Miss me with that NVM/ Jesus and his melanin/ Of the earthly element/ Transcended all that ignorance.” We only have time for Unity and all “they” want is uniformity. Unity is so much more delicious, succulent, and sweet.