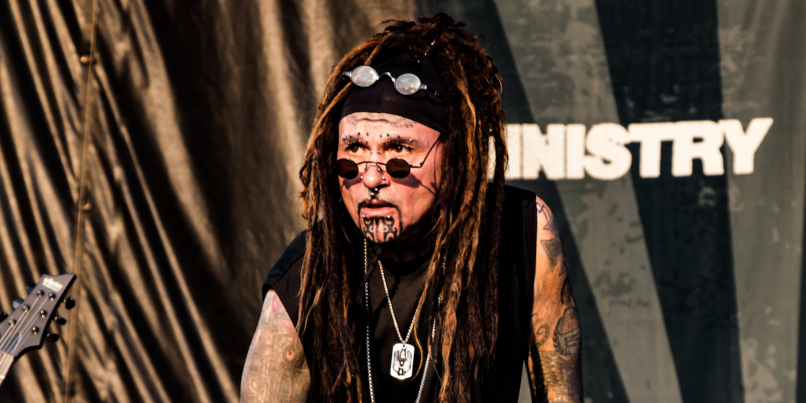 Al Jourgensen has never been afraid to speak his mind, and on Ministry‘s latest album, AmeriKKKant, the industrial music pioneer rails against President Trump, Republican policies, and more.

Ministry are set to kick off a monthlong North American tour in support of their AmeriKKKant album on November 21st at The Warfield in San Francisco. The trek will make its way east before heading back to the West Coast to wrap up December 21st at the Fonda Theatre in Los Angeles.

Leading up to the tour, Jourgensen checked in with us to discuss the AmeriKKKant album, and with that, he shared his views on President Trump, the Antifa movement, the 2020 election, fellow Chicagoan Kanye West‘s visit to the White House and more.

Read Part 1 of our interview with Al Jourgensen below, and stay tuned for Part 2, where he looks back at a classic Ministry album and more.

You have to remember, when we wrote this was literally right when he got elected, and I know a con when I see one. So, we started out with [those songs] basically to get it out of the way, because this album is not about Trump. It has some things that directly relate to Trump, like the words “orange” in the lyrics. But basically, this album is much more about where we’re at as a society to elect somebody like a Donald Trump, and the kind of influence that social media has on the populous right now. We’ve just never seen anything like this in the advancement of human civilization.

So, Donald Trump is just representative of a much more visceral problem within society, and it would be remiss for me not to touch upon his impact on society. But it’s an echo chamber. It’s an impact only in the sense that we demanded this sort of thing. So, what does that say about us as a people, as a society, as a country? Why did we put Donald Trump in [the White House]? Because it was relevant towards what’s going on in society. And I’ve considered the stuff I do basically myself holding up a mirror to the society that we’re living in, and I write about that. I mean it’s no different than Woody Guthrie writing about the depression in the 1930s. I’m sure if he had samples, he would have had samples of Herbert Hoover, you know what I’m saying? (laughs)

On the AmeriKKant track “Antifa”

The real snowflakes in this to me are the right wing. They go around bullying people and basically try to impose 1930s style fascism upon a society that’s open to anything, because of social media, you can pretty much sell anything. And then as soon as you fight back, it’s like “left wing mobs are gonna kill you” and all this bullshit we hear on mainstream media right now, and that’s not the case at all.

Antifa, if you know the history of it, was basically formed in the late 1920 and early 1930s in Europe against people like Mussolini, Hitler, Francisco Franco, and others of that time. We’re going right back to the rise of fascism in the 1930s, here we are again. So, we’ve learned nothing and it’s time for this cycle to stop. Frankly, the planet doesn’t have any more time. As you know, we’re going to be growing fucking gills by the time of 2040 just to survive along the coast. This has to be eradicated once and for all. There’s never been a fascist government that ultimately led to the success of the people that they’re trying to govern. This is just fact. And so these are the things that I try to point out on this record, and Antifa has been given this bad rap, and yes, there’s bad actors in ANTIFA, people who just go out and look for the deerskin hat or somebody in a bomber jacket and [Doc Martens] and haul off and conk them just for looking that way. Those are not the people that really need to be in Antifa. But Antifa needs to stand up for left wing principles and Democratic principles, as opposed to fascist principles, and it all started in the 1930s, and here we are again. So that’s what that song’s about.

It doesn’t matter what Democrat, as long as the Democratic platform is put up for vote in 2020, people are going to vote on what’s not going to kill them, like stripping medicare and abolishing Obamacare and tax cuts to the rich, and I can go on and on. People are just going to vote on dinner table issues in 2020, so it doesn’t really matter. It’s not a cult of personality. I don’t care if Michael Bloomberg runs, or Stormy Daniels’ lawyer Michael Avenatti runs, or an actual politician runs, or if I fucking run, except I can’t because I was born in Cuba, but the point being is that the actual policies are gonna be very popular in 2020.

If you look at it strictly from a celebrity point of view, we don’t have anyone that can match Trump. Trump takes all the oxygen out of every room he’s in. That’s the way he’s lived his whole life, because when you’re born on third base with a silver spoon in your mouth, you just demand this kind of attention and loyalty, and there’s nobody to tell you that the world doesn’t work like that. So, here we are, with the cult of personality in the White House, and I don’t really think it’s gonna matter fucking one bit who the Democratic challenger in 2020.

For 40 years, Republicans have been trying to strip away our social safety-net platforms. So, if we’re so far in debt, then they squawk about how big the debt is, and they have to chip away at these social platforms. And then as soon as they get in power, they’ve raised the debt like they did with Reagan, like they did with both Bushes, and now what they’re doing with Trump, with the largest single yearly gain in our national deficit ever. So now, because they fucked it up and gave tax breaks to the rich, they want to strip away all the old people’s healthcare. And this is just the kind of shit that we’re dealing with. Instead, we’re talking about, “Trump said ‘horse face’ the other day, and then “Trump fucked a porno star” — who the fuck cares, man? They’re gonna be taking away your ability to live paycheck to paycheck if this continues. So, this is the kind of shit that’s on the [new Ministry] album, if you want to pick it apart. It’s not just some anti-Trump, let’s blast Trump because he’s funny looking, fat, and old, and says dumb things — this is not about that.

What do I fucking care what Kanye thinks? What should people care what I fucking think? It doesn’t fucking matter. What do you think? How’s this? Here’s two platforms: One of them says, you have a safety net after you’re 65, and you have health care. The other one says the millionaires are gonna get richer and don’t worry, they’ll take care of you. That’s basically about what it is. So, it doesn’t matter what the fuck Kanye or Taylor Swift or any other celebrity says, or me, for that fucking matter. People need to start doing their own fucking homework.

Our thanks to Al Jourgensen for taking the time to speak with us. Pick up Ministry’s latest album, AmeriKKKant, via Nuclear Blast Records or iTunes, and see the band’s North American tour dates below.