Film Review: The Nutcracker and the Four Realms is a CGI Mess With an Earnest Heart 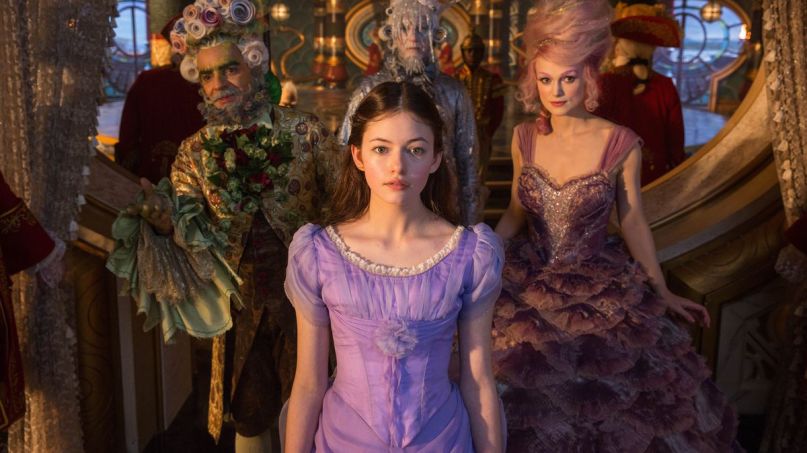 The Pitch: Just in time for the holiday season (and the holiday box office returns), Disney transforms Tchaikovsky’s iconic Nutcracker ballet into a full-on fantasy action-adventure. The film opens in a lightly steampunk, colorblind-cast version of Victorian London, where young teenager Clara Stahlbaum (Interstellar’s Mackenzie Foy) spends her Christmas Eve investigating a mystery laid out by her recently deceased mother and her whimsical inventor godfather Drosselmeyer (Morgan Freeman). That soon leads her to the magical snowy land of the “Four Realms,” an ill-defined fantastical ecosystem that expands the original ballet’s Land of Sweets (here ruled by Keira Knightley’s baby-voiced Sugar Plum Fairy) into a Narnia-esque world made up of the essential elements of childhood: candy, flowers, snowflakes, and “amusements.” Sure. That last realm is ruled by the ominous Mother Ginger (Helen Mirren), who has declared war against the others. So Clara teams up with a loyal nutcracker soldier (Jayden Fowora-Knight) to right the kingdom’s wrongs and learn more about her mother’s own connection to the Four Realms.

Holding out for a Hero: In a cinematic landscape where the term “strong female characters” is often taken far too literally, Clara joins a welcome subgenre of female adventure heroes whose strengths lie in something beyond their fists. This version of Clara is a tinkerer and inventor who relies on her knowledge of the laws of physics to help her out of a jam. More so than that, however, she’s just an everywoman bravely forging her own path in an overwhelming new world. Like Meg Murry in Disney’s recent A Wrinkle In Time, Clara is the sort of character archetype of which young boys have many (just watch any action-adventure movie from the 1980s) and young girls have far fewer.

Christmas Mourning: At its best, The Nutcracker and the Four Realms grounds it fantastical elements in a moving portrait of grief. In bookending real-world scenes, Matthew Macfadyen turns in the film’s best performance as Clara’s mournful father, a man desperate to hide his sadness behind a veneer of normalcy, something Clara mistakes for simply being unfeeling. Like Peter Pan or The Wizard of Oz, The Nutcracker and the Four Realms occasionally hints at becoming the sort of story where issues from the real world spill over into the fantasy one, especially once it turns out the death of Clara’s mother has emotional ramifications within the Four Realms as well. Unfortunately, the film gets too caught up in the tedious plot machinations of its garish CGI fantasy world to fully commit to that idea.

The Verdict: There’s no doubt that The Nutcracker and the Four Realms has its heart in the right place. It incorporates Tchaikovsky’s music and elements of ballet storytelling (led by American Ballet Theatre superstar Misty Copeland) in a way that’s clearly decided to introduce those classic artforms to a new generation of kids. The film’s no-nonsense approach to diversity is welcome, as is the fact that it centers on a mother/daughter relationship (a rarity in blockbuster storytelling). Yet the further the film moves into its Four Realms plotting, the more hollow it starts to feel. Compelling visual flourishes — like the film’s stunning costume and makeup design, or a genuinely terrifying take on the “Mouse King” — get lost in an overcrowded landscape of poorly rendered, candy-colored CGI.

The film prioritizes quest mechanics over character development to the point where it’s hard to tell why any of its characters do the things they do. The nutcracker soldier mostly seems to stick around because he’s featured in the title. Neither Foy nor Fowora-Knight ever seem entirely comfortable acting in this largely computer generated world. Knightley, meanwhile, fully commits to her portrayal of the Sugar Plum Fairy as part giddy Glinda the Good Witch, part vapid Marie Antoinette. Yet that intense level of commitment winds up feeling out of place when her co-stars are giving her so little to work with.

For a film that looks this wacky, it’s a shame that The Nutcracker and the Four Realms is ultimately pretty boring. As a family film that skews towards a younger audience, it will perhaps prove to be a magical cinematic experience for children to which this sort of thing is brand new. For adults who’ve already seen The Chronicles of Narnia movies or Tim Burton’s Alice In Wonderland, however, The Nutcracker and the Four Realms feels more like a re-gifted Christmas present.

Where’s it Playing?: The Nutcracker and the Four Realms opens on November 2nd. It’s Disney’s big holiday extravaganza, so expect it to be playing everywhere.