Film Review: Palme D’Or Winner Shoplifters Will Steal Your Heart And Snap It In Two 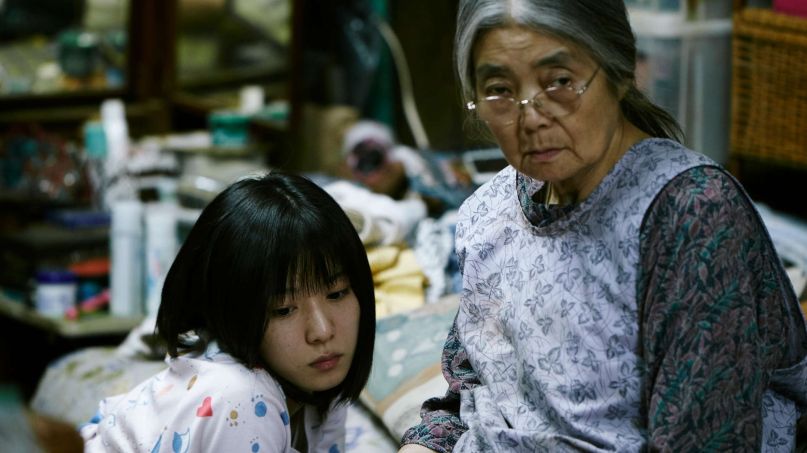 The Pitch: Hirokazu Kore-eda has established himself as one of Japan’s pre-eminent chroniclers of family and the knotty, intricate ways in which we define it. Shoplifters, this year’s Palme D’Or winner at the Cannes Film Festival, continues the conversations he started with films like Nobody Knows and Like Father, Like Son, telling a patient, often oblique story of what binds people together.

Kore-eda takes his time outlining the dynamics of Shoplifters‘ core characters, allowing viewers to rely on their own expectations of what constitutes a traditional family. We open with middle-aged Osamu (Lily Franky) and pre-teen Shota (Jyo Kairi) performing an elaborate shoplifting con in a local grocery store. They steal essentials — food, toiletries, etc. — but pay for a bundle of croquettes on the way home. There’s a warmth there, a sense of tradition and scrappiness that, when coupled with the small, cluttered home in which they sleep, allows one to grasp their plight and sympathize with Osamu’s desire to spend what little money he has on treats. On their way home, they stumble upon a small, wounded girl, Yuri (Miyu Sasaki), who they take in for the evening. There Yuri meets the rest of the family, which includes a woman, Nobuyo (Sakura Ando), who appears to be Osamu’s wife, and her sister Aki (Mayu Matsuoka).

Love ≠ Loyalty: These aren’t thieves with a heart of gold, however; we soon learn that Osamu and Nobuyo are padding their pockets with the pension of Hatsue (Kirin Kiki), the eldest member of their clan. We also catch glimpses of a dark history, with small details calling into question just how all of these people know each other. “You don’t grow up to care about others,” Nobuyo cryptically notes, alluding to the emotional drain of a painful upbringing. And it’s true: Self-preservation looms over every touching moment of connection, as does the sense that love is a luxury when you’ve spent your entire life struggling.

By viewing his characters through this lens, Kore-eda manages to paint an aching portrait of how love and loyalty are not mutually exclusive. Simultaneously, he ponders the potency of bloodlines, depicting how chosen families are often healthier than biological ones. “Maybe it’s stronger when you choose them yourself,” Nobuyo ponders at one point. But as with biological families, chosen clans are prone to different expectations, and Kore-eda deepens his narrative by showing the ways in which his characters desire opposing things from each other, whether it be devotion or an acknowledged title.

Too Much Of a Good Thing?: It’s moving stuff, even if Kore-eda threatens to dilute his themes by overindulging in them. Shoplifters overstays its welcome somewhat as the third act rolls on, with an epilogue that seems to exist only to absolve characters that don’t quite deserve it. The empathy is admirable, but one wishes for a touch more restraint, especially in the wake of such an emotionally devastating climax. But to do so would perhaps resonate as cruel in a movie that takes great pains to continually illustrate joy in the face of poverty. Kore-eda manages to turn the family’s boxy, claustrophobic living quarters into a refuge, and the film’s buoyant soundtrack exudes more whimsy than woe.

Scene Stealers: Franky and Ando craft beautiful, conflicted characters out of Osamu and Nobuyo. Both are willing to indulge the pair’s unsavory qualities, but they’re even more willing to give them the benefit of the doubt, to admit that a feeling can be both real and hollow. Love is not an absolute. Neither is selfishness. And as their relationship comes into focus, every action, smile, and fight takes on more dimension and weight. They are neither heroes nor villains; they are gorgeously, heartbreakingly, terrifyingly real.

The Verdict: The real villain here is poverty, a cancer that infects whatever purity there is to be found in Shoplifters. Osamu, Nobuyo, and Aki all work, but Kore-eda takes pains to dig into the systemic machinations that screw over the injured and pit workers against each other. Aki, meanwhile, resorts to dressing up as a schoolgirl at a peep show, where she masturbates for faceless men behind screens. Years of making more with less has impacted each of these characters, souring their innate goodness without entirely killing it. By demonstrating that, Shoplifters emerges as an oddly hopeful film, a story that reminds you that even the most wounded, selfish people can show you how to love.

Where’s It Playing?: Shoplifters is now playing in New York and Los Angeles, and will expand into limited cities in the coming weeks.