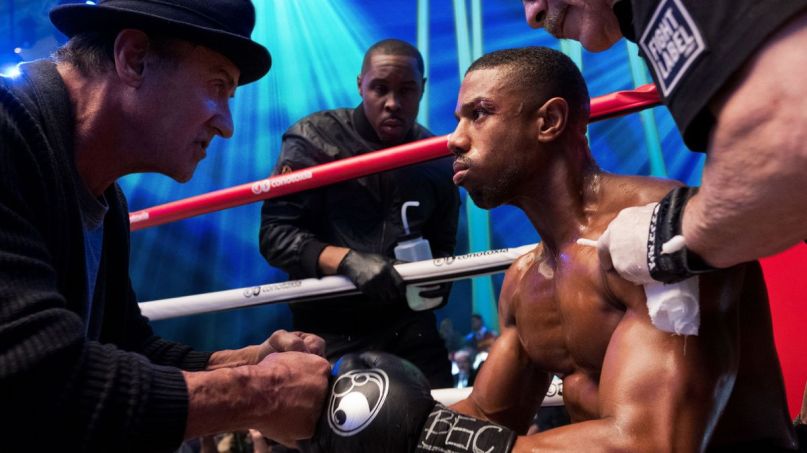 The Pitch: 33 years after he killed Apollo Creed (Carl Weathers) and was pummeled by Rocky Balboa (Sylvester Stallone) deep within the Soviet Union, Ivan Drago (Dolph Lundgren) returns for vengeance. This time, however, the one doing the breaking is his son, Viktor (Florian Munteanu), who’s hungry for Creed’s (Michael B. Jordan) world title and a chance to drag the Drago name out of the frozen Russian mud.

Here’s the rub: Whereas Drago’s coming from a shattered family, Creed’s starting to build his own, something that’s not lost on the ol’ Italian Stallion, who tells our titular hero early on: “In the ring, you got rules. Outside, you got nothing. Life hits you with all these cheap shots. People like me, we live in the past. You got people that need you now. You got everything to lose, this guy has got nothing to lose.” Go ahead and cue Bill Conti.

Ain’t Nothin’ Over ‘Til It’s Over (And Nothin’s Ever Over): If this all sounds redundant, it should. Without spoiling anything, there’s nothing narratively surprising about Creed II. The ebbs and flows of the story are incredibly predictable, and anyone who’s even remotely familiar with this franchise could probably tell you what happens without buying a ticket. What connects the punches, though, is what’s always been the strength of the Rocky franchise — the drama.

After all, the reason why Stallone’s 1976 original swept the Academy Awards the following year is because of everything that happens outside of the ring. It’s a love story wrapped up in a crowd-pleasing underdog tale. Ryan Coogler understood that, which is why 2015’s Creed was such a breath of fresh air. The film was less concerned with the archetypal matchups that had dumbed down the franchise and was more intrigued by the street-level drama that made it so palatable.

Of the five sequels prior to Creed, only two ever came close to reclaiming that dramatic spirit: 1979’s Rocky II and 2006’s Rocky Balboa. The rest are clunky ’80s arcade games, slotting in one cartoonish villain after another. By far the most gluttonous of the bunch is 1985’s Rocky IV, which capitalized on Creed’s harrowing death with an endless parade of ludicrous montages and Nintendo dialogue, all fueled by radical ’80s nationalism that hasn’t aged in the slightest.

But as we all know now, Coogler found the seeds to his own story within that macho madness, and those seeds continue to flourish in Steven Caple Jr.’s sequel, even as it has to contend with the more garish extravagances of its source material. Those extravagances wind up adding to the film’s predictability, but again, it’s not about who wins or loses, it’s about who’s winning or losing. And for the first time since Rocky II, that extends to both sides of the ring.

Child Is Father of the Man: Twelve years after Rocky Balboa, Stallone returns to the typewriter alongside first-time scribe Juel Taylor, swapping in for Coogler and co-writer Aaron Covington, and while their script lacks the punctuality, humor, and finesse of its predecessor, it doubles down on the drama in all the right places. Stallone channels his inner William Wordsworth and frames the entire story around a surprisingly nuanced meditation on the complexities of fatherhood.

For starters, the Dragos are no longer a product of Cyberdyne Systems; they’re now bastards of a country that has long since turned on them. Gone is the lifeless Ivan Drago of yesteryear and in its place is a man of humility, who’s taken his failure out on a son who looks like he could swallow his father whole. Stallone wisely gives this relationship time to breathe, and avoids another rehash of Rocky IV, which would have been all too easy given today’s political climate.

Naturally, these themes extend to our titular hero, who finds himself in an existential mess when the sins of his father’s past come knocking just as his own future is about to begin. As he’s wont to do, Stallone leaves most of this struggle to performance, and Jordan relishes the opportunity, thriving in the quieter moments. There’s a particularly moving moment between he and Tessa Thompson, where the two share a tearful gaze as they speak with doctors.

Bringing it all home, however, is Stallone, who writes himself what may appears to be a tender epilogue for his iconic role. Although not nearly as devastating as his Oscar-nominated turn in Creed, Balboa has his moments, tying up some emotional loose ends over things that were left on the table in Rocky IV and Rocky Balboa. How he manages to weave them into the overall narrative and align them with the film’s ensuing themes is quite impressive.

Does It Work Without Coogler? Yes and no. While Caple Jr. has no problem framing gorgeous scenery — there’s a wonderful montage out in the desert, stocked full of poster-worthy portraits — he lacks the charisma that Coogler brought behind the camera. Think back to all of those dizzying tracking shots on the way to the ring, or how Coogler employed cuts to add some levity to a situation. That style is sorely missing here.

The Verdict: Creed 2 is the film MGM probably wanted Ryan Coogler to make in 2015. Almost anyone else would have gone straight into the Drago cookie jar and delivered another predictable Rocky film, with all the bells and whistles that came before. That didn’t happen, and Coogler was able to deliver an original story involving the Creed name, one that didn’t feel the need to stand too tall on ceremony, and more importantly, one that was emotional.

So there was admittedly reason to be concerned when the sequel was announced and news emerged that a) Drago would return and b) Coogler would not. Those fears were mostly for naught, as Creed 2 is a commendable chapter in the franchise, thriving from a strong commitment to character, mostly thanks to Stallone’s reverence to his own legacy and the new one being created for Jordan. As he says in the film, it’s Creed’s time, and this film absolutely makes that argument.

For how much longer, well, that’s to be debated. As we learned with the original Rocky sequels, there are only so many ways you can keep this story going without resorting to lame hijinks like Mr. T or street brawls or talking robots. Fortunately for this series, Creed 2 has already reconciled the past, which leaves a long, empty road ahead, one that doesn’t hinge on Stallone or familiar faces like Drago. There’s just Adonis, and unlike what his father says, there is a tomorrow.