Film Review: CAM Downloads Horror From What We Put Online 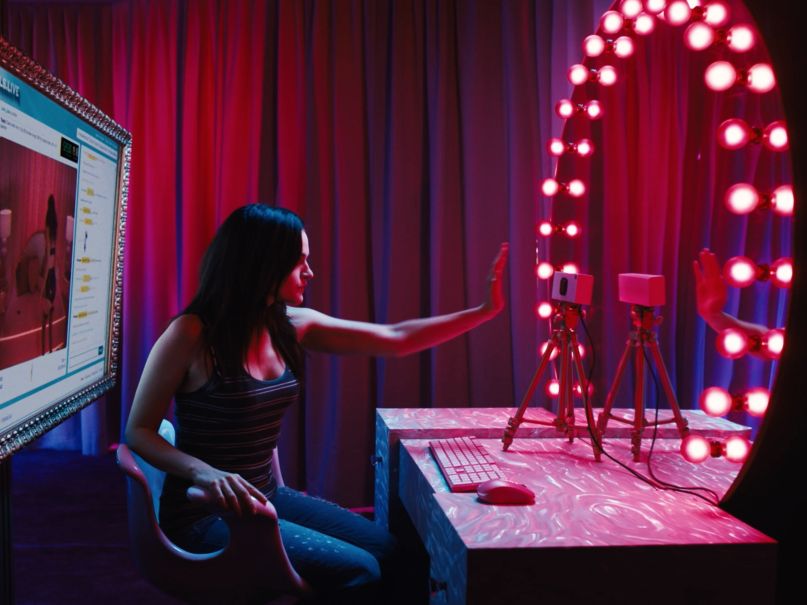 The Pitch: People know Blumhouse Productions for blockbusters like its new Halloween reboot and zeitgeist-defining genre pics like Get Out, but don’t let that distract you from the trailblazing work they’re doing in the realm of techno-horror. Unfriended and Unfriended 2: Dark Web are not only the two best examples of the burgeoning “screen movie” trope, but they’re also sharp, of-the-moment examinations of the ever-evolving ways in which technology is consuming our lives. Now, they’ve given us Daniel Goldhaber‘s CAM, a psychological horror thriller that offers a shrewd, empathetic portrait of the modern-day cam girl, a profession that’s taken the peep shows of Paris, Texas to another level.

Madeline Brewer (The Handmaid’s Tale) stars as Alice, a twentysomething who moonlights as a bubbly, often masochistic cam girl named Lola. Her camming platform is a competitive one, where stunts that blur the line between sex, violence, and other curiosities earn viewers and the “tokens” they share as payment/bargaining tools. The more views you get, the higher you rank, and Alice is eager to usurp Baby, an eerily chill cammer who sits atop the queue.

Been There, Done That: Writer Isa Mazzei’s real-life past as a cam girl gives the film’s early scenes a thrilling sense of specificity, from the cadence of Alice’s onscreen patter to the hilarious names of her clientele (BarnacleBob, PappaDong). She also offers a refreshingly candid exploration of the complicated relationships that form between a cam girl and her clients, who want to see her hurt herself as much as they want to see her naked. Toxic masculinity and sick fantasies are part and parcel of her job, and knowing this doesn’t prevent her from meeting with the occasional client, provided it’s on her own terms. It’s all fantasy, after all.

Or Is It?: But as is often the case in stories of performative sex work, the fantasy corrupts when the barrier between the person and character begins crumbling. Here, that theme emerges when Alice wakes up one day to discover that she can no longer access her account. It’s still broadcasting, however, and a horrified Alice watches on as live videos of her (?) performing and interacting with fans continue to air. As she struggles with customer support and grapples with Tinker (Patch Darragh), an overzealous fan, Alice soon stumbles upon a phenomenon with no easy answers.

It’s gripping stuff, especially since Goldhaber and Mazzei map out an endgame that’s maintains an intriguing ambiguity while still providing a definitive conclusion. Mazzei’s script has an almost meta quality to it, with her introducing and then discarding the kind of armchair detective work that a lot of modern studio horror films use to defang their central mysteries. Here, the onus is on Alice and Alice alone to wrangle her doppelgänger, who she watches exploit her family during one unsettling, uncanny session. Concepts of pure good and pure evil have no place here; there is only you, and the version of yourself you bring to the world.

Off-Camera: Goldhaber draws a stark contrast between the real world and that of the camming community, with metallic blues and reds swishing through the latter while muted tones dominate the former. Brewer navigates both with an effortless charm and plenty of nuance, drawing a clear line between who she is around her family and who she is with her clients. One wishes she had more time to luxuriate beyond the confines of the webcam, as the scenes with her mother (Melora Walters) and brother (Devin Druid) never quite flex as much as those she spends on her own. Part of that is due to Mazzei’s ultra-efficient script, which reserves the film’s few moments of leisure to Alice’s camming. As such, the film’s themes roar when they might be better off purring, diluting them somewhat.

The Verdict: Those themes, heavy as they may be, remain effective. In a trim 90 minutes, CAM channels familiar modern anxieties associated with identify theft, doxxing, social media superficiality, and, yes, even the horror of dealing with customer service. With the rise of deepfakes and myriad other forms of digital manipulation, the prospect of losing one’s self online is becoming more and more of a reality. On a more existential bent, however, is this question: what happens when you grow to hate the version of yourself that lives online?

CAM has an answer, but as the film makes clear, not everyone’s ready to delete their account just yet.

Where’s It Playing? CAM is streaming on Netflix as of Friday, November 16th.