Classic Film Review: Yellow Submarine Created a Style of Its Own 50 Years Ago 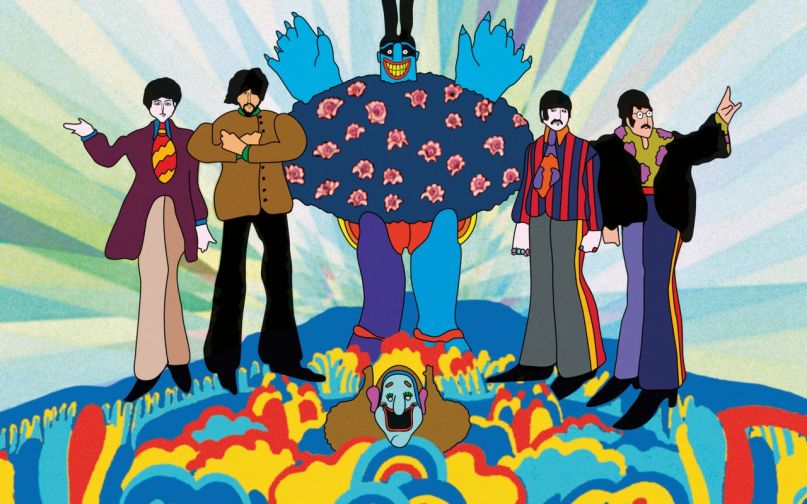 The other day, there was this meme on Instagram featuring a picture of John Mayer making a pained open mouth, with a spoon being forced upon him. The caption imagined something like “A BEATLEMANIAC TRYING TO SHARE TRIVIA AGAIN EVEN THOUGH YOU DIDN’T ASK.”

We’re not there yet with the Beatles, are we? Meme-able? Resentfully popular? Dating them as bygone in a way resembling how we talk about James Bond’s machismo, or Woodstock’s Boomer naiveté? Oh, those Beatles and their lollipop lyrics and LSD-fueled hijinks. Such is the danger of reflecting on 50 years of pop cultural bedrock: natural weathering. But this reflection, right here, is less about trivia, and more about just how damn good those Beatles were, and the movies they could inspire. They rivaled the French New Wave with A Hard Day’s Night in what could be called the proto-music video experience. They gamely satirized Bond-like adventures with their marvelous HELP!.

Yellow Submarine, well. Just how many cartoons can say that they play like Disney on acid? Like Bakshi, before Bakshi? Like riding a boat on a river with tangerine trees and marmalade skies?

Here we are, tickled pink to dive into Yellow Submarine. But how to appraise Yellow Submarine when volumes of encyclopedic literature and paraphernalia have been produced on the matter? It’s the Beatles, man! What more can be said? There are enormous books on the film’s making. Countless digital reissues of the film have come and gone with new featurettes and commentaries, new generations each getting curious vantages on the legendary quartet’s output. Toys, t-shirts, even a Lego set of the titular submersible. Arrested Development goofed on it. Simpsons, too. One could surmise there’d be no Terry Gilliam animation without it.

Yellow Submarine is just plain awesome. All your friends are aboard. We all still live on it, in some way or another. Sure, we can get balled up in production factoids and what each band member’s contributions were, but that feels so beyond the film itself. Step back. Let your mind wander. Think visual. And recall Yellow Submarine for its best and purest quality: It’s a parade of color, swirling and ebullient. Fantasia for the head shop set. Perhaps the best and most enjoyable way to view the Beatles’ third feature is to look at it for its lasting aesthetic. One might chalk that up to the trendy Peter Max lines and color choices of the 1960s, but that’s (again) too referential. Yellow Submarine’s look? Plain magnificent. Plain in broad hues: yellows, blues, purples, greens, and beyond burst within every frame. Each shot is like a child’s coloring book: shaggy around the line, but bright and confident in presentation. It’s candy. Zebra Stripe gum as a movie. But the magnificence is in the mood. It’s a fizzy lifting drink. It delights. Bubbles. Pops. Tickles the eyes, the ears, and even the heart. It’s a real thing of beauty.

It’s also magnificent in imagination. John Lennon emerging from a Frankenstein monster. Baby Ringo weeping for his mom. George cruising through a buttressed hall in a convertible. Paul’s adorably smoky eyes, under his affectionately simplified helmet of black hair. Can-can dancers traced with neon light, bumping around to “Lucy in the Sky with Diamonds” like Toulouse Lautrec’s dreams coming true. “Eleanor Rigby” laments gorgeously against the soot and dreary doldrums of 1960s London. An Escher-like “Sea of Holes” feels like home in a Bugs Bunny cartoon, or the cashed basin of a bong – whichever you prefer. It’s a parade of great sights, ranging from witty to silly to occasionally life-affirming. A proudly aged ‘64’, a jovial blue cherub by the name of Jeremy, the triumphant actualization and reprise of the Sgt. Peppers Lonely Hearts Club Band. Two-legged monsters, flying hands. And of course, that floating organ and banana-like tube in the sky that carries the Fab Four from scene to scene: the yellow submarine. It makes you feel giddy just thinking about all this, doesn’t it?

Ah, but what’s the point of all this nonsense, you might ask. It’s because the story’s, well, slim. The Beatles are collected to save Pepperland from Blue Meanies that have robbed the underwater world of music and feeling with evil green apples (perhaps a shot at the Beatles’ newly developed corporate record label – you decide). The Beatles, not voiced by their actual counterparts, are cute exaggerations, playful lads with swishy pants and a game sense of adventure. It’s idol worship for sure, but so sincere. Is this movie about fighting commerciality and square-dom? A paean to the unifying power of a Beatles hook? Or is this just great company while getting stoned?

Not to get all Willy Wonka about it, but it’s whatever you make of it. Yellow Submarine is ambient nonsense, pleasurable to all in some strange way or another. Style-over-substance is the gut reaction, until you accept and embrace that style as the work’s very substance. Yellow Submarine isn’t about anything overt. It’s about being inspired by music, by love, by the basic joys of giddiness and human feeling.

Take the “When I’m 64” sequence. There’s a certain dreadful ceremony to the movie’s insistence on animating each number leading up to 64. It matches time’s dread and inevitability, and yet, each letter gets bolder and sillier. Aging doesn’t have to be this thing. Dogs jumping through hoops. Colorfully designed and diverse displays on each number. 60 features a couple kissing between the numbers. And for every person that dreads hearing “All You Need Is Love” at every wedding they attend (Richard Curtis’ fault, really), it’s used here with such triumphant vigor that you’ll be hard-pressed not to buy into that song’s mantra. Cynicism fades, Pepperland comes to life, money and anger evaporate in favor of that all-time classic emotion: love.

50 years on, it’s funny how timeless so much of the Beatles catalogue feels. Even their movies are holding up better than many of that era. Ignore the fandom, and just run a Google image search for all the pop art this film alone inspired. Yellow Submarine is a journey to the very brightest spots of our imagination, and it’s a vibrant reminder of how joyful, inventive, and freeing animation can be.