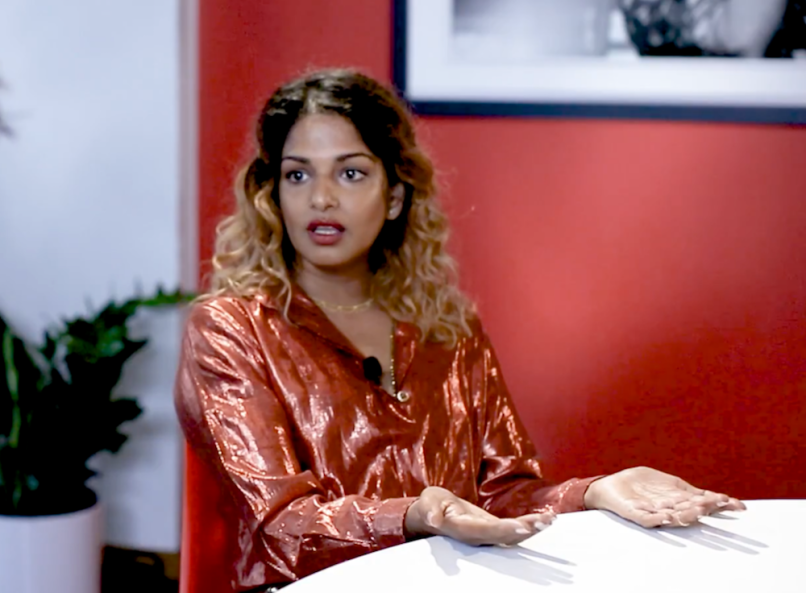 M.I.A. on The House of Strombo

Last month, M.I.A. released MATANGI / MAYA / M.I.A., a new documentary that chronicles her life and career thus far. In support of the award-winning project, M.I.A. sat down for a incredible, in-depth interview for The House of Strombo. She spoke about the making of the film — it took seven years and was sourced from 1000 hours of footage — but the most notable moments came during a discussion about constantly being censored and why she’s no longer “motivated” to release new music.

Both topics are interconnected and ultimately can be traced back to the idea that M.I.A., as a public figure and through her own music, speaks the truth when it comes to politics and social issues — but it’s not the right kind of truth. As in, it’s not the kind of truth the fits neatly into the narrative that today’s pop culture landscape typically rewards.

“Everyone says ‘you have a platform,’ but what do they mean? Because my records are buried because of the labeled issues with me,” M.I.A. says. When she says labeled issues, though, what she means is her outspokenness regarding things like the plight of Tamil women like herself — a conversation most in the mainstream entertainment industry refuse to acknowledge, let alone engage in. Because she’s a person of color, and these are her concerns and what her art tends to symbolize, she’ immediately has felt categorized as an outsider.

“Sometimes it’s just cause I’m an outsider that doesn’t fit in with the diversity of America,” says M.I.A. “All of that is just not digestible.” The conclusion she comes to is that she doesn’t truly have a platform “because you are outside of the acceptableness.” “If I want to be bigger, I kind of have to say nothing.”

It’s either that or she says she needs to talk about more “palatable” truths. “I might have to make an anti-Trump record, but if I make anything else, it’s not going to wash,” she explains. She brings up the concept of feminism and offers that as an example of something that she can discuss in her music, as long as it’s the correct conversation of feminism. “It’s easy for me to play that card, like ‘I’m so down for equal pay in Hollywood’ and I can discuss it in within the Western context,” M.IA. says. “But if I want to talk about Tamil women wearing uniforms and eating cyanide pills because they didn’t want to be raped by the Sri Lankan army…” she trails off because she knows that such a conversation would likely not be received as well, if at all. “I know that both of these extremes of women exist.”

The idea that she is an other, an outsider that doesn’t fit the Western mold has led to censorship on various levels. Social media accounts like her Twitter and Facebook have been frozen for over a year. She, as well as her seamstress mother, has found it difficult simply just to get a visa to enter America. “She’s [her mother] seen as a threat and has been banned from America, but the guys who committed war crimes and killed thousands of people and raped women and killed kids have green cards,” M.I.A. claims, “and that’s the truth.” And this has all been in motion well before the NFL controversy.

In much the same way, the type of diversity that she represents has made it difficult — quite literally — to distribute her own music. She’s no Adele or Madonna. “For 15 years, I had to fight the battle where I didn’t have a genre… and that became my genre, that I was a mashup of many genres.” She adds, “I just don’t exist like that,” referring to the predictable, “cookie cutter” trends in modern music.

“I have been pushed out for five years or something, and I haven’t been able to successfully release a record at all within this system,” remarks M.I.A. “Or get my voice heard in terms of the Tamil plight, or get credit for anything I did. That’s been completely erased. And people know, but no one is allowed to say it.”

M.I.A. also points to the consolidation of the music industry as another hurdle. She mentions how Europe doesn’t have its own industry and everything has to be funneled through — and thus approved by — the main music industry based in North America. She laments the de-evolution of XL Recordings, once her label, that initially offered her as much creative freedom as she wanted, but now “has to answer to iTunes and SoundCloud… it’s sad.”

In a way, M.I.A. has all but decided to quit music. She loves making it and has considered writing songs again, but “obviously I’m not motivated to put it through the system.” She says the system hasn’t gotten to that point yet — the point at which it’s ready to accept and hear M.I.A. for who she really is.

Judging by her interview, the future appears to be bleak for M.I.A., but at numerous points she vows to overcome the industry and everything that stands in her way by completely circumventing it — by making her own platform somehow, cutting a new film from all the leftover, unused footage. “For me, I have to find another way.”

Watch the full interview below, followed by a MATANGI / MAYA / M.I.A. trailer.