"In those moments, when it just happens naturally, I think is the best way" 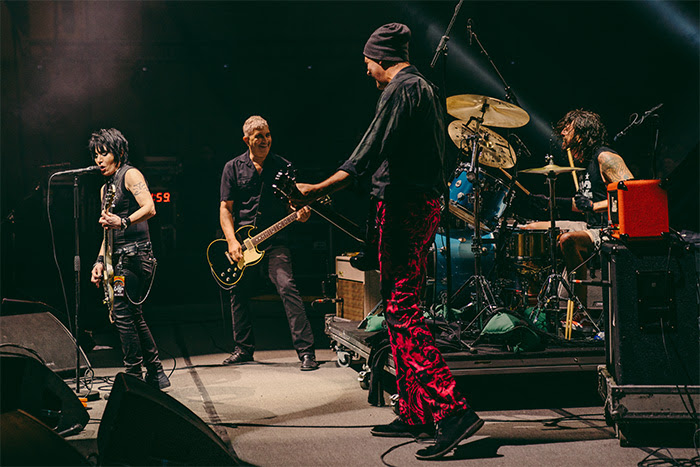 At Foo Fighters’ Cal Jam Fest earlier this month, the surviving members of Nirvana reunited on stage for their second public performance since Kurt Cobain’s passing in 1994. For their surprise six-song set, Dave Grohl, Krist Novoselic, and Pat Smear were joined by Joan Jett and Deer Tick’s John McCauley, who split vocal duties.

In a new interview with Kerrang! (via Alternative Nation), Grohl and Novoselic were asked if they had plans for any additional Nirvana performances in the future.

Grohl admitted that he toyed with the idea of a Nirvana reunion tour following the band’s induction into the Rock and Roll Hall of Fame in 2015, during which Grohl, Novoselic, and Smear first reunited on stage. “After we played the Rock & Roll Hall of Fame, I considered the idea that, if there was an opportunity, we could do it again.”

“But it’s delicate territory, and you can’t treat it like just another show,” Grohl added. “It’s very complicated, and very special. In those moments, when it just happens naturally, I think is the best way.”

“Personally, it was great to play with those guys again, and to play those songs,” Novoselic remarked. However, like Grohl, Novoselic doesn’t see Nirvana reunion shows becoming a “regular thing” and added, “It “won’t become a whole circus.”

Novoselic is open to working with Grohl in other capacities, however. “If the right circumstances present themselves we’d do it, because we’ve done it before,” Novoselic said, noting their past collaboration with Paul McCartney on “Cut Me Some Slack”.

For her part, Jett would be open to joining Nirvana if the road, if such a thing were to come to fruition. “I can’t even contemplate that. I can’t even think that they would do that? If it comes up, I’ll figure it out then,” Jett told Kyle Meredith in a recent appearance on Kyle Meredith With…. Listen to Jett discuss her experience fronting Nirvana and more in the episode below.