Film Review: Hunter Killer is Largely Dead in the Water 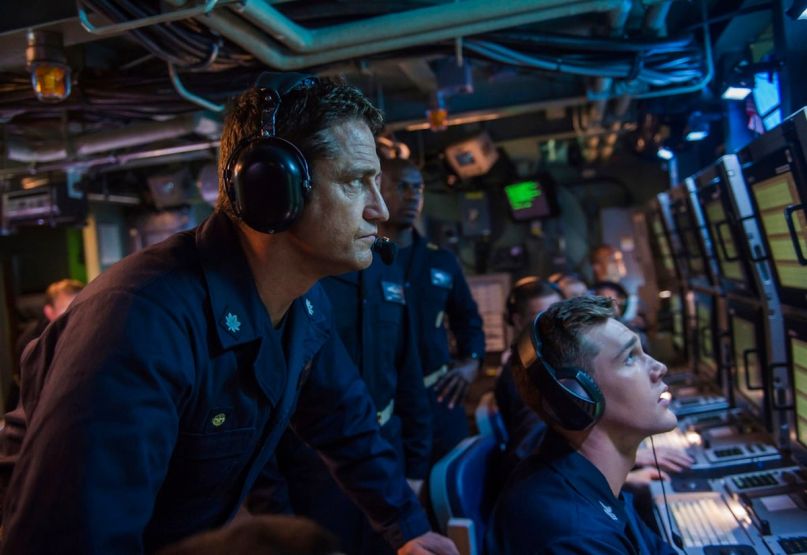 The Pitch: Based off Firing Point, a novel by writer Don Keith and retired military commander George Wallace, Hunter Killer brings together three separate stories — an undersea mission to investigate a vanished American submarine, led by Captain Joe Glass (Gerard Butler); a Navy SEAL team’s observation of a Russian marine base; and a coup by Russian defense minister Dmitri Durov (Mikhail Gorevoy) against the country’s president (Alexander Diachenko). By instigating strategic attacks on both American and Russian ships, Durov hopes to trigger a war which, suffice to say, neither country wants. The mission, which our heroes are quick to accept, involves saving the Russian president from the closet where he’s hogtied and loading him onto Glass’ submarine. After all, this is a Gerard Butler movie, and if there’s one thing we’ve learned from Gerard Butler movies, it’s that there’s only one man who can save us. That man? Gerard Butler.

Meat and Potatoes: It doesn’t get more straightforward than this. Any nuance to be found in Keith and Wallace’s book is excised in Arne Schmidt and Jamie Moss’ by-the-numbers screenplay, which intentionally treats matters of international warfare and foreign relations with kid gloves. There are no shades of grey in this story; rather, there is the carefree convenience of having a lone baddie upon which to lay the entirety of this potential World War. Butler’s Glass, meanwhile, is both supernaturally confident and incapable of ever being wrong. Longstanding international tensions are swiftly cast aside in the name of decency and preservation, with the Russian president transformed from an uneasy adversary to a willing ally; never once is his character colored by the country’s status as an authoritarian state. The naivete of it all would be adorable, were our current president not presently bending over backwards to impress murderous dictators.

The Crew: Character feels like a nuisance in Schmidt and Moss’ screenplay, a curious development when the story’s coasting on training wheels. Linda Cardellini‘s NSA analyst is a mom; Zane Holtz‘s Navy SEAL is bad at his job; Common’s rear admiral is…very serious? Oscar winner Gary Oldman is also here to advocate war and remind people this is “not a time to pussy around.” And Butler’s Glass? Well, he’s been on some crazy, scarring missions, but don’t expect to hear much about them. Don’t expect to learn much about his crew, either, who exist solely to protest his unconventional, haphazard methods and unearned sense of trust and be subsequently humbled when everything works out as planned.

This Is An Action Movie, Right? It is, and Hunter Killer‘s best moments undoubtedly come during its moments of peril. Director Donovan Marsh achieves a few genuinely tense sequences, whether in Glass’ attempts to outmaneuver guided missiles, a vessel slowly buckling under the pressures of the deep sea, or a seemingly futile gun fight. That said…

Hope You Like CGI: Shitty CGI, too. You can nearly see the pixels in the opening sequence, in which Marsh’s camera scans over and under polar ice caps to reveal the goofy-looking subs beneath. Aside from some pointless POV imagery, there are no memorable pictures or captivating flourishes in which to indulge.

The Verdict: Hunter Killer has thrills, but they’re of the cheapest variety. The message is wide-eyed, but pandering, and the threats narrowed to such an absurd degree that the inevitable kill shot is as hollow as it is satisfying. Marsh’s nuts-and-bolts approach to plot allows for a propulsive urgency, but it’s hard to care when everyone onscreen is reduced to dialogue that feels robotic in its functionality. It’s easy to get lost in the zig-zags of the movie’s endless missiles; it’s harder, however, to care where they land.