"To put it very simply, I love these guys.” 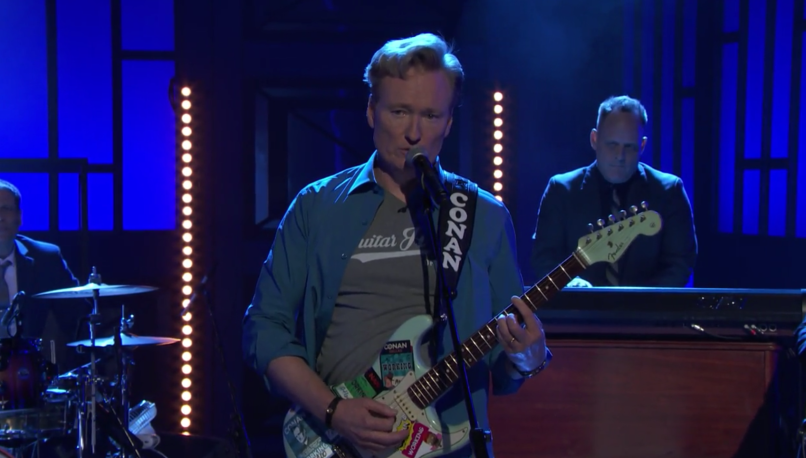 Come January, Conan O’Brien will be slimming his TBS show down to 30 minutes, doing away with any musical guests. Apparently, part of that change now includes parting ways with his longtime house band, Jimmy Vivino and the Basic Cable Band.

In a rather surprising turn of events, last night marked the end of the band’s tenure on the series, and O’Brien tearfully sent them off. “I can say this with confidence—I have been graced with the most versatile, loyal, and joyously effervescent band in the history of television,” he confessed, adding: “To put it very simply, I love these guys.”

Later on, O’Brien hopped on stage to close things out with a cover of Ronnie Hawkins’ “40 Days”. “The guys asked me if we could do one number that we did on the road, what, eight or nine years ago,” O’Brien explained, referring to his post-Tonight Show run of dates dubbed, ‘The Legally Prohibited from Being Funny on Television Tour’. “This is what we always closed the show with and it’s a little bit of a barn burner.”

He wasn’t lying. Watch the clips below.

This is quite a shakeup for O’Brien. The band’s been a part of his programming since the very beginning at NBC’s Late Night, back when they were led by E Street drummer Max Weinberg and called the Max Weinberg 7. Vivino eventually took over the band when Weinberg jumped ship following O’Brien’s short tenure on The Tonight Show, and they’ve since been soundtracking every episode.

Next up, O’Brien will return to the road this November and December for a handful of stand-up dates in what he’s called, “Conan & Friends: An Evening of Stand-Up and Investment Tips”. He’s also starting a new podcast called Conan O’Brien Needs a Friend and also plans on unlocking all of his sweet, sweet archival content in celebration of his 25th anniversary hosting a late night show.