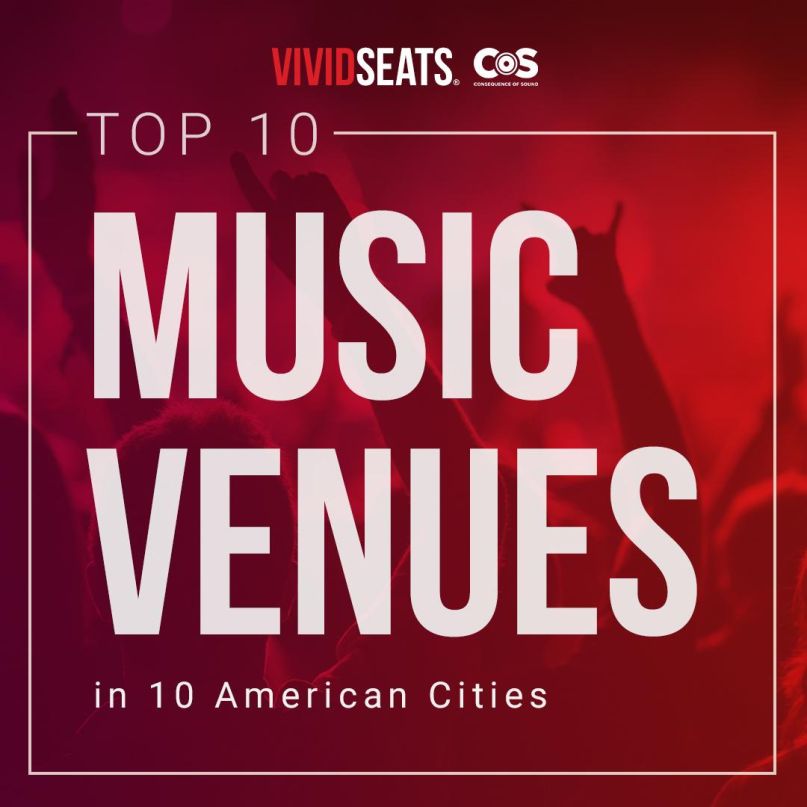 People are hardwired to associate places with memorable moments. That’s why we all remember where we were when major events happened in our lives. However, for music fans, especially concertgoers, it comes down to more than just where we happened to be when we saw a show that changed our lives. We know that the venue — the layout, the atmosphere, the sound, the people — actually helped create that once-in-a-lifetime performance. It’s true that a terrific venue can’t always bail out a lousy set, but as we all know, it’s an essential ingredient for live music at its very best.

With that in mind, we teamed up with Vivid Seats and asked 10 of our trusted music writers to recommend the 10 best venues in their respective cities. Below, you’ll find one of their picks from each of the 10 cities we looked at: Atlanta, Austin, Boston, Chicago, Los Angeles, Nashville, New York, Portland, San Francisco, and Seattle. For the entire slate of top venues in these cities, you can check out Vivid’s full list here or by clicking on the banner below.

Tucked inside MJQ Concourse on Ponce De Leon Ave, The Drunken Unicorn is literally underground and often hosts bands to match. It’s a fun and intimate venue that is super well-located and, with low cover charges, is always worth a visit. Don’t expect to get cell service — you could probably use the time away from your phone anyway — and definitely bring cash if you plan to buy drinks. Nicely enough, the bar is in a separate room inside MJQ and can be a great place to take a break if you’re waiting for a particular band to take the stage. –Isabella Gomez

Event Slate and Tickets for The Drunken Unicorn: Click here or on the Vivid Seats icon below.

Once you walk under the Antone’s marquee smack dab in the middle of downtown Austin, you’ll find yourself in a small, T-shaped space, where nearly every spot affords a good view of the stage. Billed as “Austin’s Home of the Blues,” with greats like Stevie Ray Vaughan once gracing its stage, Antone’s actually hosts musical artists of all stripes. Yet, if one wants to know a consistently great hub for blues and soul music, hop past the crowds of Sixth Street and go one block over to this Austin essential. –Brice Ezell

Event Slate and Tickets for Antone’s Nightclub: Click here or on the Vivid Seats icon below.

Perhaps the biggest complaint about the music scene in Boston is its lack of all-ages venues. Back in 2014, JJ Gonson opened two performance spaces at her restaurant Cuisine en Locale to help solve that problem. Rebranded as ONCE Somerville, the 9,000-foot event space looks like a middle-school dance ballroom on the inside, yes, but it offers food and drinks upstairs at the adjacent restaurant, and, most importantly, works to book the kind of shows that represent overlooked touring artists as well as the local acts that make up Boston’s own backyard. It’s a solution-in-progress for the city and one that’s quickly become a new home to concertgoers of all ages. –Nina Corcoran

Event Slate and Tickets for ONCE Somerville: Click here or on the Vivid Seats icon below.

Originally a Schlitz brewery, Schubas has since metamorphosed into a quaint music venue that has seen countless artists — both acclaimed and undiscovered — appear on its stage during its enduring history as one of Chicago’s noted cultural fixtures. Complete with a full bar and food service, Schubas packs in any aspect of the live music experience one could crave under one roof. The charming corner tavern has earned a place in the heart of many a Chicagoan. –Lindsay Teske

Event Slate and Tickets for Schubas Tavern: Click here or on the Vivid Seats icon below.

This new kid in town has already made a sizable splash since arriving in 2014. Located just south of the heart of downtown, this throwback venue has already hosted the likes of Blood Orange, Nick Cave and the Bad Seeds, Slowdive and Red Hot Chili Peppers, who played there as part of a Bernie Sanders benefit. It’s also where the late Chris Cornell interviewed Led Zeppelin’s Jimmy Page onstage for Page’s eponymous 2014 book. With room for 1,600 people, it provides an intimate space for bigger artists to do something a little bit different from the norm. –Scott T. Sterling

Event Slate and Tickets for The Theatre at ACE Hotel: Click here or on the Vivid Seats icon below.

The End is the Nashville venue most likely to leave you covered in sweat or beer … or both. The tiny dive bar primarily hosts punk, metal, and rock and roll acts. It’s rare to see a show here without a mosh pit or stage divers making the most of the sub-200-capacity room. The bar only serves beer, but it’s cheaper than any other venue you’ll find. The End is the punky, rebellious younger brother of the legendary Exit/In (more on that later), which sits just across the street, together making up the revered “Rock Block” of Elliston Place. –Carson O’Shoney

Event Slate and Tickets for The End: Click here or on the Vivid Seats icon below.

DIY is an important faction of any music scene, so it hurt when Glasslands shut its doors in 2014. But when the owners came back in 2017 with Elsewhere, they came back with a vengeance. The Bushwick club houses five different spaces, three of which serve as the main venues, including a rooftop. Hitting that sweet spot between Brooklyn chic and pretension, the huge space feels like a welcoming home to the hip and the lost. Add in eclectic bookings, the art gallery, cafe, and more, and it’s easy to see why the nascent club is becoming one of the city’s fastest rising locales. –Ben Kaye

Event Slate and Tickets for Elsewhere: Click here or on the Vivid Seats icon below.

During the day, this venue serves as the hub for the growing Bunk Sandwiches empire. Once the sun sets, the tables are replaced by a stage and this spot in Portland’s industrial district becomes a hub for garage rock, old-school indie, and Americana artists. As the business is owned by a couple of indie rock lifers and music junkies, the bookers of Bunk Bar have an ear for young talent and a charm that allows them to convince acts that could fill rooms 100 times its size (e.g. Built to Spill, Drive Like Jehu) to perform there. –Robert Ham

Event Slate and Tickets for Bunk Bar: Click here or on the Vivid Seats icon below.

The California Masonic Memorial Temple, known as The Masonic, sits atop Nob Hill, blocks from downtown San Francisco. The building is an architectural landmark for its façade���s 12-foot-high sculptures and the lobby’s 38-by-48-foot mural. The stately 3,000-seat rounded theater hosts a variety of shows, including pop and crossover acts like Troye Sivan and Kacey Musgraves, legends like Joan Baez, and comedians like Conan O’Brien. –Katie Moulton

Event Slate and Tickets for The Masonic: Click here or on the Vivid Seats icon below.

There’s no shortage of great, small-capacity venues in Seattle, but few create the same intensity between artist and audience as The Sunset in Ballard. Walking through the warm glow of the front bar, you’ll find a black door in the back of the room, leading to the performance space. The low ceiling and low stage put concertgoers face-to-face with the artists. This lack of divide gives a thrilling sense of spontaneity to the room, leading to some “you had to be there” performances from the likes of UK punks IDLES and Vancouver electronic superstar Grimes. –Dusty Henry

Event Slate and Tickets for The Sunset Tavern: Click here or on the Vivid Seats icon below.