Banksy’s painting self-destructs after selling for $1.1 million in auction

The frame shredded the painting to pieces 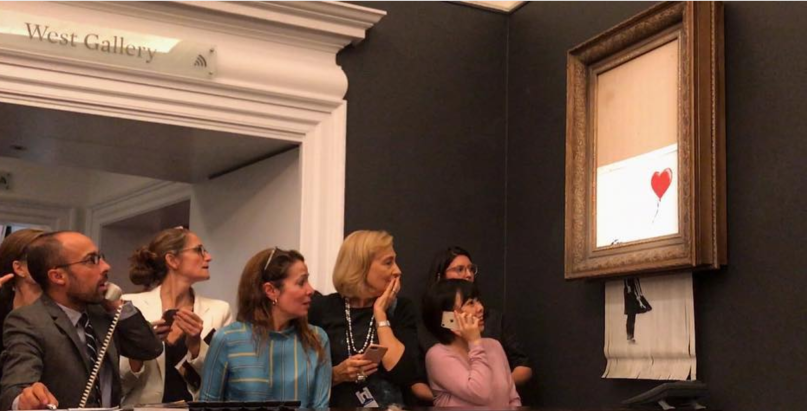 A rare piece of artwork from Banksy went up for auction this evening — only to self-destruct moments after it was sold.

According to The Art Newspaper, a copy of Banksy’s iconic “Girl with Balloon” painting was auctioned at Sotheby’s in New York City on Friday night. However, almost immediately after the record-setting bid of $1.1 million was announced aloud, an alarm was triggered inside the frame and proceeded to shred the painting to pieces.

“It appears we just got Banksy-ed,” said Alex Branczik, head of contemporary art, Europe. “He is arguably the greatest British street artist, and tonight we saw a little piece of Banksy genius.” Branczik maintained that Sotheby’s was “not in on the ruse.”

“We are busy figuring out what this means in an auction context,” Branczik added. “The shredding is now part of the integral art work. We have not experienced a situation where a painting has spontaneously shredded, upon achieving a record for the artist.”

Update: Baksy has shared a behind-the-scenes video showing how he installed a shredder into a picture frame, which was used to destroy one of his paintings that sold for $1.1 million.

What a great perfomance! Right after the hammer fell, Banksy self destructed/shredded after selling for 860.000£ at the Sotheby‘s evening auction on the 5th of October 2018. . ✖️✖️✖️ #banksy #sothebys #auction #art #shredded #destroyed #video #classicbanksy #london #streetartnews #news #legendary #goinggoinggone

Last year, Banksy opened the Walled Off Hotel, a full-service art hotel located in the West Bank city of Bethlehem billed as having “the worst view in the world,” with musical contributions from Massive Attack’s 3D, Trent Reznor and Atticus Ross, Flea, Hans Zimmer, and more. In 2015, Banky constructed his very own Dismaland “bemusement park” in London.