TV Review: Saturday Night Live Gets Bailed Out by Guests in Season Premiere 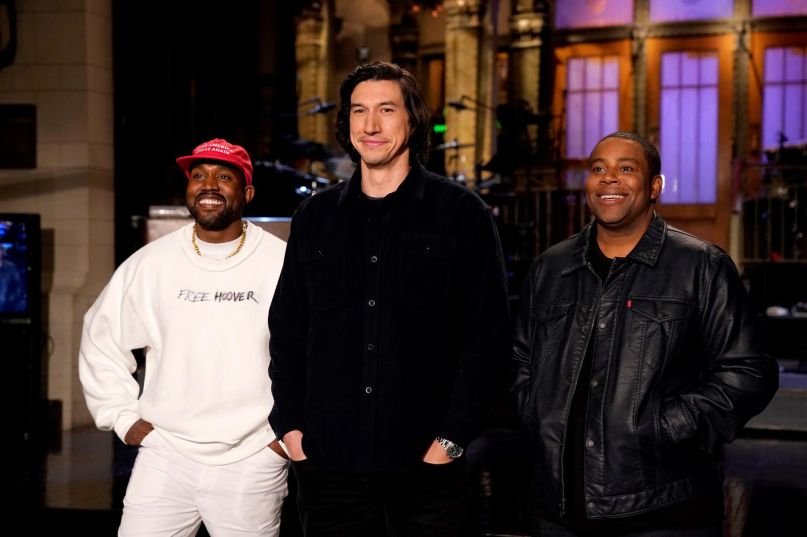 Shows that have been on the air for 43 years shouldn’t be sweating bullets come season premiere time. And I doubt that Lorne Michaels, the writers, or the cast and crew of Saturday Night Live were second-guessing themselves in the lead-up to last night’s return. Sure, Chevy Chase, one of the original Not Ready for Prime Time Players, recently savaged the quality of the show he helped launch, “Weekend Update” anchors Michael Che and Colin Jost just emceed the least-watched broadcast in Emmy history, at which SNL won for Outstanding Variety Sketch Series — a selection that came across as inspired as Donald Trump giving his administration A+ grades when, in fact, the previous season slumped into mediocrity most weeks. But all of this comes with the territory of being an American institution. Ratings fluctuate, critics grumble, water coolers gurgle, and the show still goes on.

And SNL had reason to carry a bit of swagger going into last night. Adam Driver, one of the show’s better-received hosts of recent years, was all set to take on hosting duties again, Kanye West (yeah, I’m exhausted just typing his name) was booked as musical guest on the same evening he had hinted at releasing a new album, and there was a fresh 90 minutes (minus commercials) in which to acknowledge Pete Davidson is actually as lucky as his character Gavin, who hooked up with his high school teacher. That’s about as must-see as it gets. So, how did they do with the bases loaded? Let’s find out.

Hot or Cold Open?: After a full season of Trump fatigue, Season 44 began instead by taking viewers inside this week’s Ford/Kavanaugh senate hearings. And while many of us never want to relive those painful hours again, this farcical recreation of our current political chaos did what the best of these SNL skits do: make us feel oddly better by poking at our government’s absurdities. Whether it was Matt Damon’s intense surprise appearance as “keg half-full kind of guy” Judge Brett Kavanaugh — almost on par with Melissa McCarthy’s Sean Spicer revelation of a performance — and his entourage of rich, white high school buds (Tobin, PJ, Squee, Donkey-Dong Doug, Handsy Hank, and Gangbang Greg), Kate McKinnon’s apoplectic polemic as “single, white male 5’10” uncut” Lindsey Graham, or the ubiquity of Alyssa Milano, the country had to appreciate a couple silly laughs after a few days of crying.

The Host with the Most?: In the past, he’s been Kylo Ren, a cat-loving television host, and Disney’s Aladdin. Well, now you can add the Fortnite-playing Mr. McTavish, an octogenarian oil baron, and himself being shot by an arrow to Adam Driver’s memorable SNL roles. His ability to exude a charming social awkwardness one moment and 100% commit to a delightfully bizarre character the next make him the type of host you want to see again and again. But, boy did he seem underused this time around. Then again, what do I know? I’m from Vermont.

Musical Guest or Pest?: Will last night’s performances alongside Lil Pump and Teyana Taylor go down in history with other spellbinding Kanye SNL moments like “Black Skinhead” and “Ultralight Beam”? No, not even close. But in a year in which West offended just about everyone in the world with either a Tweet, a tirade, or a dumb MAGA hat (which all of this week’s promo materials featured him wearing), it was refreshing and, dare I say, redeeming to see our favorite genius showing his lighter side by bouncing about in a giant sparkling water costume or humbly backing Taylor on “We Got Love”. And, yeah, that closing rendition of “Ghost Town” with 070 Shake and Kid Cudi was a dope touch — despite the stupid hat.

Kanye and Lil Pump perform “I Love It” on SNL

Best Sketch: In an evening of sketches that continually fell flat, aside from some inspired performances, Adam Driver’s turn in the classroom sketch as wicked 82-year-old oil baron Abraham H. Parnassus transformed an absolutely nothing skit into the funniest minutes of the night. Think of Daniel Plainview with an extra 30 years of crushing souls and conquering adversaries under his belt, and you have a rough idea of Parnassus. Watching his son, Mordecai (Davidson), try to look him in the eye as he stabs a dead bird with his cane should become a cult classic SNL moment.

Worst Sketch: Take your pick. Outside of the cold open and Driver’s bits, this episode played it safe and half-baked most of the night.

Most Ready for Prime Time Player: Sad to say, but nobody in the regular cast really set themselves apart last night. Besides a couple great McKinnon impressions, Cecily Strong and Aidy Bryant played smaller bits beautifully, but nothing anyone will remember come Monday. It’ll be interesting to see who the show leans on during weeks where they’re not working with someone as good as Driver.

The Real Fake News: In the era of Trump, it’s become increasingly impossible to tell a fresh political joke come Saturday, and with the cold open and “Rad Times at Frat U” video taking shots at this week’s politics and commenting on the past catching up with entitled idiots down the line, Che and Jost spent most of their time rehashing, though, kudos to Che’s line about replacing Kavanaugh: “Are Republicans so pro-life they don’t even have a Plan B for this?” Toss in a couple “Gins-burns” from McKinnon’s Ruth Bader Ginsburg, another outburst from Serena Williams thanks to Leslie Jones in a catsuit/tennis tutu, and some reflections from Pete Davidson on having a sugar mama, and you have a “Weekend Update” that made for just as good a potty break as the national anthem does before a football game.

Verdict: There were some worthwhile moments last night. The problem is that just about all of them stemmed from a guest appearance. Damon started the season off with a welcome surprise, Driver bailed out nearly every single sketch he was in, and West and his guests brought a beautiful, loving vibe to the episode. While that might carry a show, it won’t shoulder the load of a full season. The skits were weak, the jokes were obvious, and the cast barely earned a laugh all night outside of McKinnon and a couple self-deprecating jokes from Davidson. What can we say? There’s always next week.