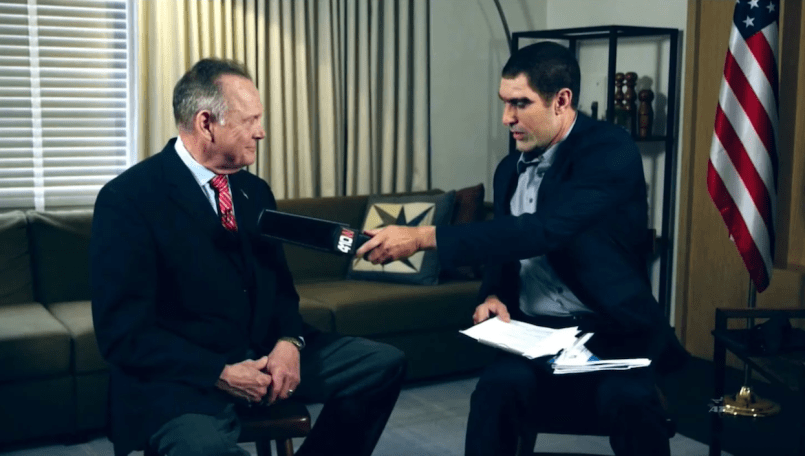 Judge Roy Moore on Sacha Baron Cohen's Who is America?

Roy Moore has never been afraid to file a lawsuit against someone who publicly said something unflattering about him, so it’s not terribly surprising that he’s now suing Sacha Baron Cohen for $95 million (!!) over his Showtime series, Who is America?.

During the third episode of the series, the former Alabama Supreme Court Chief Justice/Senatorial candidate sat down with Cohen as his Israeli anti-terrorist expert character Erran Morad. After a brief interview about Alabama’s heritage of equality (uh…), Cohen/Morad demonstrated a pedophile-detecting wand. In a clear jab at the numerous sexual assault allegations levied against Moore, the wand “went off” as it passed over his body.

Moore had threatened to sue Showtime, CBS, and Cohen before the episode even aired. He promised to defend himself against what he labeled a “defamatory attack on my character,” and he’s now followed through. The suit seeks damages for defamation, intentional infliction of emotional distress, and fraud. “Defendant Cohen’s character falsely and fraudulently introduced a false and fraudulent ‘device’ supposedly invented by the Israeli Army to detect pedophiles,” reads the complaint (via The Hollywood Reporter). “During the segment, Defendant Cohen’s ‘device’ – as part of the false and fraudulent routine – purports to detect Judge Moore as a sex offender, thus defaming him.”

There are a number of things likely limiting the success of the suit. It’s more than likely Moore was made to sign a release freeing any of the networks or Cohen from fault. Furthermore, the interview in question doesn’t actually say Moore is a sex offender; in fact, it ends Cohen’s character telling Moore, “I’m not saying that you’re a sex offender at all.” The actor/comedian has faced numerous similar legal situations over the years, and almost all have been tossed.

While the defendants have yet to respond to the complaint, it’s hard to imagine it getting very far. After all, Moore’s history of suing folks who paint him in a negative light hasn’t set the best precedent: Every judge on the 16th Circuit court, which Moore himself was a member of, recently recused themselves from hearing his conspiracy case against four women who accused him of sexual misconduct.

Watch the segment at the center of this latest frivolous suit below.