Paul Feig's witty thriller is as crisp, smooth, and potent as a gin martini 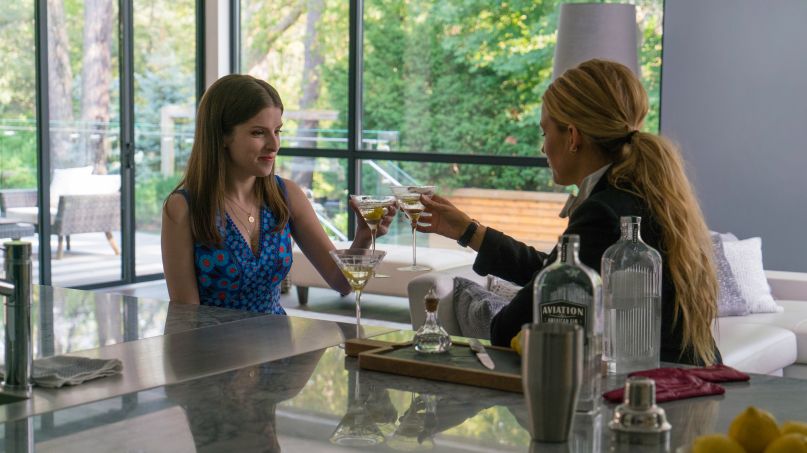 A great many gin martinis — ice-cold, with a rinse of vermouth and a lemon twist squeezed into life above the glass — are consumed in A Simple Favor, Paul Feig’s effervescent, deliciously campy thriller. It’s enough to make you want one. Like the film, they’re elegant and crisp, an absolute pleasure to consume; like the film, their actual purpose is to get you fucked up and put into the right mood. And best of all, like the film, they’re far from sweet. A gin martini is piney and bright, bitter and crisp, and lingers, tauntingly, on the tongue. When the glass is empty, the enjoyment continues.

That’s the purest pleasure of A Simple Favor — it’s the kind of fun that sticks around after the credits roll. It’s not because of the film’s twists and turns, several of which any movie-lover will see coming from a mile away. They’re good, fun twists, but they’re not actually the point of this exercise. The point — beyond getting fucked up and having fun — is climbing into Anna Kendrick’s sensible, energy-efficient vehicle and riding along with her into Blake Lively’s elegant, wild world. It’s a relationship that shouldn’t make sense in a story that should seem absolutely mundane, and yet watching the two of them spar, both face to face and from afar, is one of the most unadulterated joys of 2018.

Kendrick plays Stephanie Smothers, a widowed single mother who has wrapped up her whole life in caring for her kid, volunteering for everything, and running a “mommy vlog” full of tips for great gluten-free snacks and creative projects to leave at gravestones. The reason for the latter: her best friend, Emily (Blake Lively), has gone missing. They haven’t been friends for long, and would seem like an odd pair to an outside observer. To any observer, really. Emily is glamorous, bitter, and brash, with a hot husband (Henry Golding) and gobs of cash. She tells Emily to stop apologizing for everything, then with a single arched eyebrow has Stephanie apologizing for apologizing, then apologizing for that, then taking another drink and spilling her guts. In a short time, their friendship — if that’s what it is — blooms, and then Emily asks for her simple favor: Can Stephanie pick up her son from school? She does, and Emily disappears.

Feig, and screenwriter Jessica Sharzer (adapting Darcey Bell’s book of the same name), return to Emily and Stephanie’s gin martini sessions throughout the film, and not just because A Simple Favor is nearly always at its best when Lively and Kendrick banter, barefoot and tipsy. They’re a useful tool, a choice that prevents Emily’s early disappearance from cutting off the film’s most gripping element at the knees. It allows us to gradually unspool the thread that makes up both of these characters: Emily, an enigma by design, someone who wants no photographs taken of her and alludes to a shady, fantastic past; Stephanie, a woman who projects a convincing image of nice, normal motherhood, albeit in a quirky, overachieving way. She seems to be a sort of manic pixie dream mom, while Emily’s a rich, drunk take on Serena van der Woodsen — Gossip Grown Woman, if you will. But both are far more complicated than they seem, and as Stephanie lets her guard down and Emily connects with the person behind the facade, they and their relationship become infinitely more compelling, thanks to Sharzer’s sharp screenwriting, some really top-notch casting, and a pair of terrific performances delivered with a giddy wink.

Those scenes tell us a great deal about the inner lives of these women, but we’d know them anyway. Such is the strength of the art direction (Brandt Gordon), the production design (Jefferson Sage) and set decoration (Patricia Larman), and especially the costume design (Renee Ehrlich Kalfus — a solid dark horse for that Oscar pool of yours). Stephanie’s Target chic is all color and noise, a sartorial choice made by a woman desperately trying to outpace the darkness of both her past and her present and a fitting costume for a person gunning hard for the title of mother of the century. Yet when she walks into Emily’s modernist palace, she’s a figure of chaos, out of place and disruptive, every pattern and pom-pom screaming that she does not belong. Emily’s wardrobe, opulent and menswear-inspired, telegraphs her complexities nicely. She’s stepped out of the world of film noir, channeling Barbara Stanwyck, Gene Tierney, and Lauren Bacall while flaunting her utter disregard for what anyone else thinks of her as a wife and mother. The gradual transformations they both undertake play out in their wardrobes, which the characters treat as costumes, as armor, and as commentary.

If the performances, designs, and French pop-drenched score and soundtrack (Theodore Shapiro) are smart — and they are — they’re matched, if not exceeded, by Feig’s direction. Yes, odds are you’ll see the twists coming a mile away. Who cares? The journey there is the point, and Feig makes the ride an unbelievably enjoyable one. He’s careful to give Lively and Kendrick the space to build a relationship that should be utterly implausible into something that works, and matches their wry, even campy enjoyment of the proceedings with wit of his own. Devoted watchers of Turner Classic Movies and collectors of Criterion will make themselves giddy counting the references to classic thrillers of the ‘30s and beyond (the very first thing in this writer’s notes on the film is an all-caps “CHARADE!”), while anyone who likes fun and/or jokes will find some piece of savage, off-kilter humor in nearly every scene. There’s a gag with a three-piece suit near the top of the film that’s the kind of morsel you’ll want to savor over and over again, and a scene with Kendrick blasting music in her car that’s similarly delicious. No scene overstays its welcome, nothing is over-explained, and not even when the threat is most pronounced does the effervescence leave the film. It’s sharp, efficient, and so satisfying — the kind of film which gives the impression that it was really, really fun to make.

It was almost certainly fun to write, too. Sharzer’s script does stumble a bit here and there, particularly with regard to Golding, who’s given little to do but look hot — on the upside, it’s an approach that feels subversive, but it his lack of development does seem to be a bit of a missed opportunity. That last bit also applies to the entertaining Greek chorus of parents, led by Girls’ Andrew Rannells, who pop up throughout the film, and a particularly enjoyable graveyard scene in the last act robs what follows of some of its potency. But on the whole, it’s literary and clever, with dialogue as sharp as any comedy this year. It’s also undeniably feminine, but not in the conventional, Nancy Meyers sense. These women are women, messy in the ways women are messy, cruel and funny and smart about their roles in the world and the power they carry. If Double Indemnity were a hangout movie, this would be its sequel. It’s delicious.

Put it this way: A Simple Favor is likely to make viewers want to drink a gin martini and wear a pantsuit without a shirt on and maybe start a vlog on which they try to solve a mystery while making novelty baked goods. It’s not aspirational, because this is a bad situation. It just looks like so much fun that you immediately want to get started. It’s potent and chilly and warm, all at once. In that sense, maybe a negroni would have been a better cocktail choice: sweet, bitter, strong, and classic, beautiful to look at, and sure to get you drunk.