Classic Film Review: Dazed and Confused Grooves With an Air of Immortality 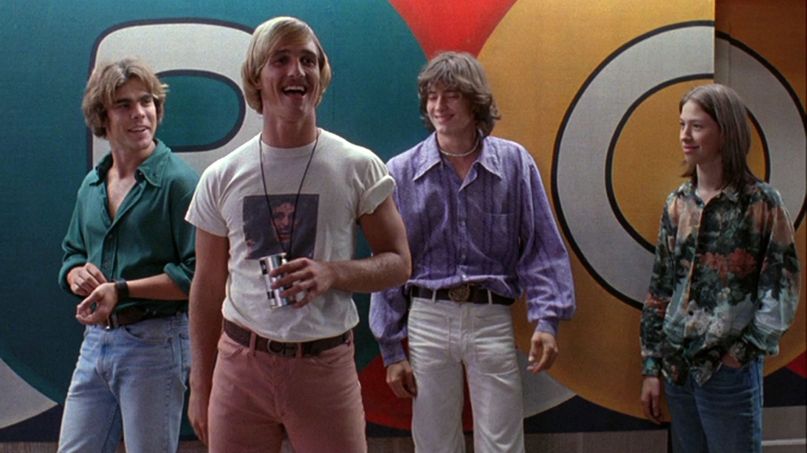 “All I’m saying is that if I ever start referring to these as the best years of my life, remind me to kill myself.”

Consider this for a moment: it’s been longer from the release of Dazed and Confused to now than it was between the film’s release 25 years ago this week and the time in which it was set. To audiences of the ’90s and onward, Dazed and Confused is more than just one of the great teen comedies, although it absolutely is. It’s also arguably as influential as any piece of art in influencing the way modern audiences who weren’t around for the 1970s remember them. It’s a piece of the pop cultural lexicon that’s achieved an influence greater than itself, all while defining the “hangout comedy” while also being one of of the most easygoing examples of the form.

But to wax poetic for too long is to look past what’s made Dazed and Confused so endearing over time, more than anything: the slice-of-life, everyday commonality of its tone, story, and filmmaking. The follow-up to Richard Linklater‘s auspicious 1991 debut Slacker, Dazed and Confused took that film’s sprawling Austin eccentricity and rewound the clocks back to the mid-’70s, before technology became omnipresent and Jimmy Carter validated America’s anxieties regarding the nation’s uncertain future. Linklater’s film occasionally opens the door to the outside world, but it’s only in peripheral ways, the ones that matter in high school. Alpha male cruelty. Sexual desperation and anxiety. Worries about the unknowable future that’ll inevitably swallow the beautiful present. It’s also about the funny, horny, embarrassing, memorable stuff that happens in between all of that, but it’s there, and creeping in a little more each day.

But first, it’s 1976. Before the various miscreants of Dazed and Confused go off to cruise the streets, bash in mailboxes, and not forget that you’re celebrating a bunch of slave-owning, aristocratic white males not wanting to pay their taxes on the 4th, it’s the last day of school. Linklater’s film breathlessly dives in from this moment on, never stopping for hoary plot contrivances or adult interference (they barely exist in this Austin) on the roads to nowhere in particular, with the right tunes and the right buds. In addition to Foghat‘s “Slow Ride” becoming the U.S. national anthem of laying back and smoking a joint thanks to Wiley Wiggins‘ final moment onscreen, a passing listen to modern-day classic rock radio will cement just how many of the films have been entrenched in the national consciousness thanks to Linklater. Alice Cooper, Bob Dylan, Aerosmith, Peter Frampton, Steve Miller, and a pile of other bands managed to bridge the first major generational gap through Linklater making them universal, and timeless.

That timelessness carries over to the film at large. It’s no accident that some of the film’s best-remembered exchanges are delivered while cruising around town in search of something to do, or loitering outside various nightlife spots and liquor stores and high schools. Dazed and Confused, in its rambling way, captures one of the things that all people actually miss most about youth: the ability to be completely aimless, at least here and there, without any kind of consequence. There’s an air of immortality that goes hand in hand with youth, a notion that sitting in the back of your friend’s car and blasting some tunes and fucking around is as grand and important as life will ever get. It’s untrue in most ways, and it’s unwise to get stuck in that place as time passes on, but you always yearn for it even when you know it’s unattainable. Like so much of Linklater’s best work, the film is profound through its being deliberately unassuming. It’s sincere without being dopey, honest without being mean, optimistic without being oblivious of how hard the future can be. Life can’t stay this way forever, but it’ll never be this easy again.

Crucially, the movie also remembers that life isn’t as easy from time to time, whether it’s in Pink (Jason London) discovering that people having expectations and demands of him won’t end with high school, or in guys like O’Bannion (Ben Affleck) who’ve peaked early and won’t be lucid enough to realize it for far too many years. Linklater’s screenplay clearly knows who the heroes and villains are, but it doesn’t necessarily condemn any of them. Every character in a great Linklater movie has a subtle inner life, and Dazed and Confused separates itself from so many cliched high school tales of social castes colliding by teasing out those lives in tiny instances.

Talking to people who love Dazed and Confused is like watching them work through a Rorschach test. It offers such a wide swath of personalities that every audience member connects with their own facets of it, from the uncertain Mitch (Wiggins) to Wooderson (Matthew McConaughey), a charmer who’s slowly growing into a Texas burnout more and more conspicuously by the hour. Yet it also renders its tiny ecosystem with such earnest affection that you can’t help but be seduced by all of it, even the gross parts or the unpleasant ones. Everybody has their own favorite part, because everybody can find at least a piece of themselves in someone, somewhere in Dazed and Confused. After all, it’s the experience of the American teenager in microcosm. We all just had to, or have to, keep livin’. L-I-V-I-N.